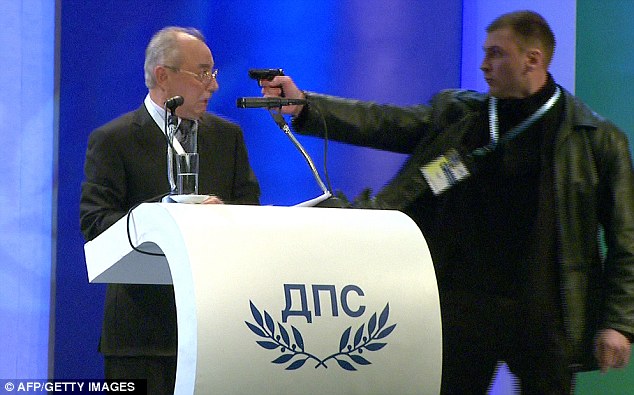 A Bulgarian politician today survived an extraordinary assassination attempt when a man stormed the stage and held a gun to his head as he was giving a speech.

Fortunately for Ahmed Dogan, leader of the Movement for Rights and Freedoms, the weapon misfired giving him time to react and hit the would-be assassin’s hand out of the way.

Before he could attempt a second shot the unidentified suspect was tackled to the ground by security guards and delegates attending the conference in Sofia.

Television footage showed the man jumping out of the audience and interrupting a speech by 58-year-old Dogan, who has led the party for almost a quarter of a century.

In a split second, he raises the gun to Mr Dogan’s head but it appeared to misfire.

The politician then knocked the gun away and fell to the floor as he attempted to flee.

Security guards and delegates rushed onto the stage where they wrestled the attacker to the ground.

A separate group surrounded a shocked Mr Dogan in a protective shield.Politicians then appeared from the audience and begin rained blows on the suspect as he was pinned to the ground.

He was later pictured being taken away by police bloodied and bruised.

‘Ahmed Dogan is in good health. Everything is under control,’ Movement for Rights and Freedoms official Ceyhan Ibryamov told journalists.