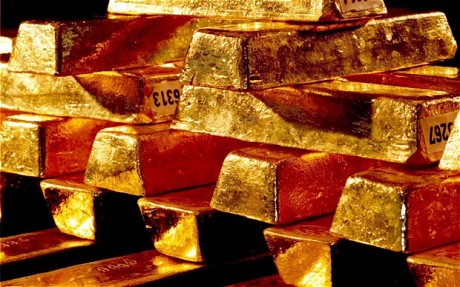 Back in the mid-1920s, the head of the German Central Bank, Herr Hjalmar Schacht, went to New York to see Germany’s gold. However the NY Fed officials were unable to find the palette of Germany’s gold bullion. The Chairman of the Federal Reserve, Benjamin Strong was mortified, but to put him at ease Herr Schacht turned to him and said ‘Never mind, I believe you when you when you say the gold is there. Even if it weren’t you are good for its replacement.’ (H/T The Real Asset Company)

But that was then and this is now. In the eyes of the Germans – and who can blame them? – America has lost its mojo to such a degree that it can no longer be trusted honour its debts, even in the unlikely event that it were financially capable of doing so. Which is why, following in the footsteps of Venezuela’s Hugo Chavez (who may be an idiot but is definitely no fool), Germany is repatriatriating its gold from the US federal reserve. It will now be stored in Frankfurt.

This is an important story. One of the most spectacular con tricks of the last twelve months, pulled off by our political class with the connivance of much of the media, is that we’ve escaped the global economic armageddon which looked till quite recently as if it was going to engulf us. The Euro didn’t collapse; Europe isn’t in flames; QE hasn’t led to Weimar-style hyperinflation; the fiscal cliff has been dodged; Britain hasn’t yet lost its triple A credit rating; the bond markets haven’t gone postal…

Well it may look calm on the surface, but this latest move by the Bundesbank gives us a pretty good indication that beneath the surface that serene-seeming swan is paddling for dear life.

If you want a full analysis I recommend this excellent summary by Jan Skoyles. The scary part is this bit:

Every few months there is a discussion regarding what China are planning on doing with the gold they both mine and import every year, with many believing they are hoarding the metal as an insurance against the billions of US Treasury bonds, notes and bills they hold. Many believe they will issue some kind of gold-backed currency in the short-term and dump its one trillion dollars’ worth of US Treasury securities. Whilst, at the moment the US seem to take their monopoly currency for granted, should the Chinese or anyone else behave in such a manner, the US will need to respond – most likely with gold, which on its own it does not have enough of.

Anyone who thinks this isn’t going to happen eventually should read Peter Schiff’s parable How An Economy Grows And Why It Crashes. If something can’t go on forever, it won’t.

That’s why I’m not embarrassed to admit that what few savings I have are heavily weighted towards gold at the moment. And the Telegraph’s investment experts appear to agree with me.

But if you are going to buy gold it has to be gold you can trust and get your hands on. First, it has to be gold bullion investment (or coins) not “paper” gold (the paper gold market having long since grown detached from the bullion it supposedly represents). Second, it has to be stored somewhere where, if push came to shove, you’d feel confident enough to get it back. At the Real Asset Company, which is where I keep some of my precioussss, they actually offer you a choice of location as to where you’d like to store your gold bullion: Geneva; London; or Singapore.

You could argue, I suppose, that this is a bit over the top. I mean things would have to get pretty bad, wouldn’t they, for any of those safe havens to go tits up. Well, wouldn’t they?

This is one of the tragic dilemmas of being a goldbug. In order for the gold price to go as high as you’d like it to go, things would have to get so bad that life would scarcely be worth living.

Then again, if people as level-headed as the Germans are taking the problem this seriously then so I think should we all.

4 thoughts on “The Germans Don’t Trust Obama With Their Gold – And Can You Blame Them?”