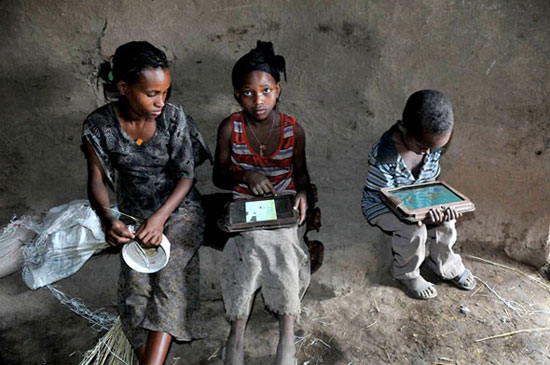 What happens if you give a thousand Motorola Zoom tablet PCs to Ethiopian kids who have never even seen a printed word? Within five months, they’ll start teaching themselves English while circumventing the security on your OS to customize settings and activate disabled hardware. Whoa.

The One Laptop Per Child project started as a way of delivering technology and resources to schools in countries with little or no education infrastructure, using inexpensive computers to improve traditional curricula. What the OLPC Project has realized over the last five or six years, though, is that teaching kids stuff is really not that valuable. Yes, knowing all your state capitols how to spell “neighborhood” properly and whatnot isn’t a bad thing, but memorizing facts and procedures isn’t going to inspire kids to go out and learn by teaching themselves, which is the key to a good education. Instead, OLPC is trying to figure out a way to teach kids to learn, which is what this experiment is all about.

Rather than give out laptops (they’re actually Motorola Zoom tablets plus solar chargers running custom software) to kids in schools with teachers, the OLPC Project decided to try something completely different: it delivered some boxes of tablets to two villages in Ethiopia, taped shut, with no instructions whatsoever. Just like, “hey kids, here’s this box, you can open it if you want, see ya!”

Just to give you a sense of what these villages in Ethiopia are like, the kids (and most of the adults) there have never seen a word. No books, no newspapers, no street signs, no labels on packaged foods or goods. Nothing. And these villages aren’t unique in that respect; there are many of them in Africa where the literacy rate is close to zero. So you might think that if you’re going to give out fancy tablet computers, it would be helpful to have someone along to show these people how to use them, right?

But that’s not what OLPC did. They just left the boxes there, sealed up, containing one tablet for every kid in each of the villages (nearly a thousand tablets in total), pre-loaded with a custom English-language operating system and SD cards with tracking software on them to record how the tablets were used. Here’s how it went down, as related by OLPC founder Nicholas Negroponte at MIT Technology Review’s EmTech conference last week:

“We left the boxes in the village. Closed. Taped shut. No instruction, no human being. I thought, the kids will play with the boxes! Within four minutes, one kid not only opened the box, but found the on/off switch. He’d never seen an on/off switch. He powered it up. Within five days, they were using 47 apps per child per day. Within two weeks, they were singing ABC songs [in English] in the village. And within five months, they had hacked Android. Some idiot in our organization or in the Media Lab had disabled the camera! And they figured out it had a camera, and they hacked Android.”

This experiment began earlier this year, and what OLPC really want to see is whether these kids can learn to read and write in English. Around the world, there are something like 100,000,000 kids who don’t even make it to first grade, simply because there are not only no schools, but very few literate adults, and if it turns out that for the cost of a tablet all of these kids can simply teach themselves, it has huge implications for education. And it goes beyond the kids, too, since previous OLPC studies have shown that kids will use their computers to teach their parents to read and write as well, which is incredibly amazing and awesome.

If this all reminds you of a certain science fiction book by a certain well-known author, it’s not a coincidence: Nell’s Primer in Neal Stephenson’s The Diamond Age was a direct inspiration for much of the OLPC teaching software, which itself is named Nell. Here’s an example of how Nell uses an evolving, personalized narrative to help kids learn to learn without beating them over the head with standardized lessons and traditional teaching methods:

Miles from the nearest school, a young Ethiopian girl named Rahel turns on her new tablet computer. The solar powered machine speaks to her: “Hello! Would you like to hear a story?”She nods and listens to a story about a princess. Later, when the girl has learned a little more, she will tell the machine that the princess is named “Rahel” like she is and that she likes to wear blue–but for now the green book draws pictures of the unnamed Princess for her and asks her to trace shapes on the screen. “R is for Run. Can you trace the R?” As she traces the R, it comes to life and gallops across the screen. “Run starts with R. Roger the R runs across the Red Rug. Roger has a dog named Rover.” Rover barks: “Ruﬀ! Ruﬀ!” The Princess asks, “Can you ﬁnd something Red?” and Rahel uses the camera to photograph a berry on a nearby bush. “Good work! I see a little red here. Can you ﬁnd something big and red?”

As Rahel grows, the book asks her to trace not just letters, but whole words. The book’s responses are written on the screen as it speaks them, and eventually she doesn’t need to leave the sound on all the time. Soon Rahel can write complete sentences in her special book, and sometimes the Princess will respond to them. New stories teach her about music (she unlocks a dungeon door by playing certain tunes) and programming with blocks (Princess Rahel helps a not very-bright turtle to draw diﬀerent shapes).

Rahel writes her own stories about the Princess, which she shares with her friends. The book tells her that she is very good at music, and her lessons begin to encourage her to invent silly songs about what she’s learning. An older Rahel learns that the block language she used to talk with the turtle is also used to write all the software running inside her special book. Rahel uses the blocks to write a new sort of rhythm game. Her younger brother has just received his own green book, and Rahel writes him a story which uses her rhythm game to help him learn to count.

Read more about Nell in this paper, and if you haven’t read The Diamond Age, do so at once.