In the past few weeks there has been a veritable explosion of White House petitions ranging from the bizarre to the surreal to the outright absurd, including such demands as Texas (and other southern states) seceding, deporting Piers Morgan, not deporting Piers Morgan, creating a Joe Biden sitcom, and even making a total mockery out of the US, and global, monetary system and evading the debt ceiling using a cheap, platinum coin-based parlor trick.All of these are, for lack of a better word, a la carte distractions launched by bored American citizens, meant to evade the menial drudgery of everyday life, and, generally, reality. In short: entertainment. And, logically, virtually none have so far contained actual, actionable provisions, that stood to benefit all Americans, instead of just one half of the ideological or party split. At least not until a new petition appeared two days ago, one demanding that the administration do something that has never been done on the public record: perform an assayed public audit of all the 8,100 tons of gold owned by the US Treasury. And not just any audit, but one including “professional auditors outside of the Mint, Treasury, GAO, Inspector General and Federal Reserve system.”

That is one petition, which unlike all the other gimmicky wastes of time, that we (and certainly the German people if not the Bundesbank) would wholeheartedly endorse, and one which we hope promptly crosses the 25,000 signature threshold needed for a formal response from the White House.

Sadly, the response will be one denying what the people demand, but it will be interesting to see just what excuse the White House uses to shoot down an idea that is far more worthy of people’s time and attention than “minting” coins whose only real symbolism is that America is flat broke. 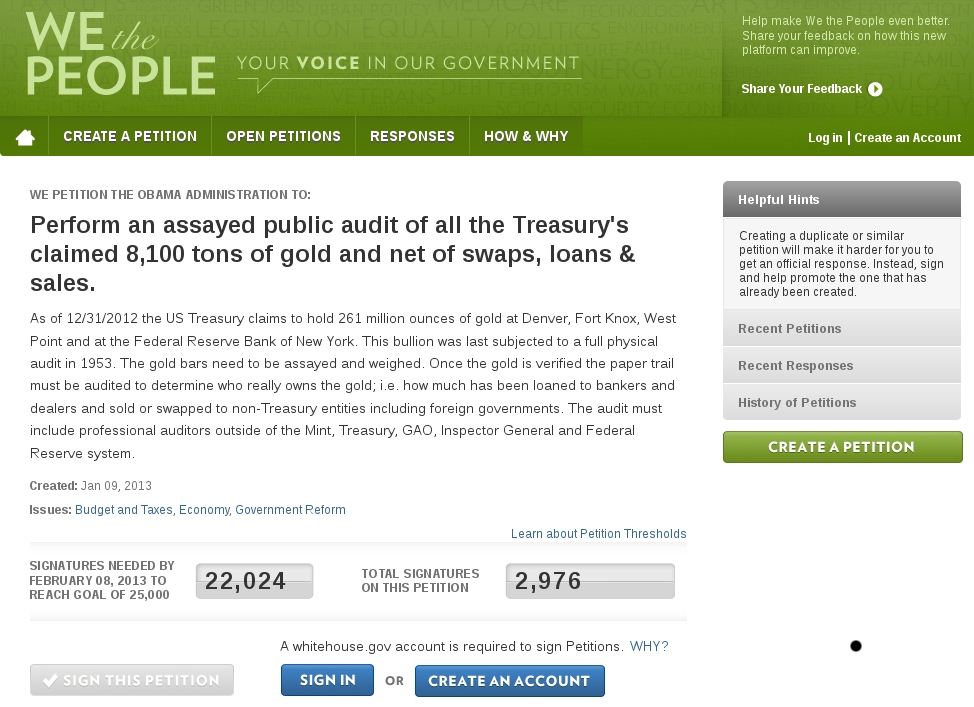