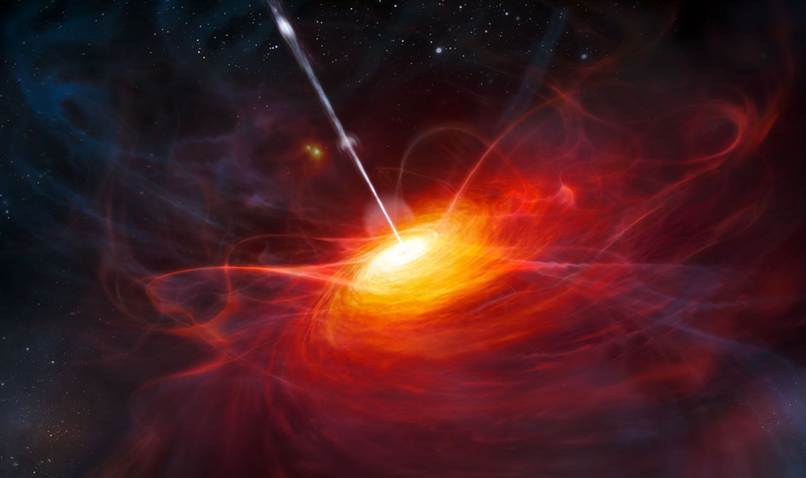 Light from the most distant quasar yet seen reveals details about the chemistry of the early universe.

Astronomers have discovered the largest known structure in the universe, a clump of active galactic cores that stretches 4 billion light-years from end to end.

The structure is a large quasar group (LQG), a collection of extremely luminous galactic nuclei powered by supermassive central black holes. This particular group is so large that it challenges modern cosmological theory, researchers said.

“While it is difficult to fathom the scale of this LQG, we can say quite definitely it is the largest structure ever seen in the entire universe,” lead author Roger Clowes, of the University of Central Lancashire in England, said in a statement. “This is hugely exciting, not least because it runs counter to our current understanding of the scale of the universe.”

Quasars are the brightest objects in the universe. For decades, astronomers have known that they tend to assemble in huge groups, some of which are more than 600 million light-years wide.

But the record-breaking quasar group, which Clowes and his team spotted in data gathered by the Sloan Digital Sky Survey, is on another scale altogether. The newfound LQC is composed of 73 quasars and spans about 1.6 billion light-years in most directions, though it is 4 billion light-years across at its widest point.

To put that mind-boggling size into perspective, the disk of the Milky Way galaxy — home of Earth’s solar system — is about 100,000 light-years wide. And the Milky Way is separated from its nearest galactic neighbor, Andromeda, by about 2.5 million light-years.

The newly discovered LQC is so enormous, in fact, that theory predicts it shouldn’t exist, researchers said. The quasar group appears to violate a widely accepted assumption known as the cosmological principle, which holds that the universe is essentially homogeneous when viewed at a sufficiently large scale.

Calculations suggest that structures larger than about 1.2 billion light-years should not exist, researchers said.

“Our team has been looking at similar cases which add further weight to this challenge, and we will be continuing to investigate these fascinating phenomena,” Clowes said.

The new study was published Friday in the Monthly Notices of the Royal Astronomical Society.