When it comes to the impact of the just enacted 2013 tax hikes (payroll tax cut expiration affecting everyone together with the tax hike on those making over $400K), economists are in broad agreement on one thing: the first half of 2013 will be impacted by roughly a 1.0%-1.5% drop in GDP. However, a big question emerges when attempting to quantify the adverse impact on US growth as the year progresses past June 30. Most strategists and economists ignore this issue, and instead chose to believe that all shall be well as by July, the US population will be habituated to getting a smaller paycheck and general consuming behavior will no longer be impacted relative to a previous baseline.

Sadly, as we all know, there are three certain things in life: death, taxes, and the majority of economists being dead wrong, which is why it is prudent to consider an alternative, one which assumes that Americans don’t “habituate” to being poorer, and do not revert to a baseline spending model, regardless how much economists “will” a given outcome (especially since no estimates take into account spending cuts, which may happen, and which will serve as a double whammy to consumption in addition to already enacted tax hikes).

Which is why we were surprised to learn that according to at least one model created by Goldman, the total consumption hit for all of 2013 (not just H1), may well be higher than what most people assume. In fact, as Goldman shows, based on a model conceived by Christina and David Romer, it is possible that US GDP growth in the second half is slashed by an additional 2-2.5%, something which very likely will tip the country into recession as the combined impact over the entire year could be as high as 3.5%, eliminating even the most optimistic forecasts for organic growth in the US for the new year.

But it gets worse. As Goldman observes, “based on our reading of the debate in Washington, we have become more concerned about our assumption that the automatic spending cuts (or “sequester”) will be delayed into 2014. If the sequester takes effect as scheduled from March 1, this would present an additional downside risk to our growth forecast in the later part of the year.”

So the worst case scenario for GDP growth from tax hikes alone is already 3.5%, and one may have to add to that another several percent in GDP reduction from an spending cuts, which might well lead to a 4-5% GDP drop in 2013 in the worst case, a case determined solely by the dysfunction in Washington.

Should this happen, the implications for monetary policy and even further easing at that point (on top of the already enacted, indefinite $85 billion per month), not to mention risk and hard assets, are self-explanatory.

The Consumption Hit From Higher Taxes

•    We expect the $200bn increase in federal taxes on individuals to be a major headwind for the economy this year, shaving around 1 percentage point off the annualized growth rate of personal consumption in 2013H1.

•    We compare this forecast to the implications from three empirical models including (1) a setup that traces out shocks to disposable income on consumption; (2) the Fed’s macro-econometric model “FRB/US”; and (3) the approach pioneered by economists Christina and David Romer, who compile a history of legislated tax changes. The results suggest that our expectation for a 1 percentage point fiscal drag on annualized consumption growth in 2013H1 is broadly consistent with these models.

•    But there are risks to our expectation that the fiscal drag will diminish meaningfully in 2013H2. First, the Romer and Romer approach suggests that the tax hit to growth might continue to build in the second half of the year. Second, we have become more concerned about our assumption that the automatic spending cuts (or “sequester”) will be delayed into 2014. This presents an additional downside risk to our forecast that growth will pick up to a trend rate in 2013H2.

Federal taxes on individuals in 2013 are likely to rise by around $200bn, worth 1.3% of GDP or 1.6% of disposable personal income. This estimate adds the expiration of the payroll tax cut ($126bn) as well as the increase in upper-income taxes via expiration of the Bush tax cuts ($50bn) and healthcare-related taxes ($24bn). We expect the resulting reduction in disposable income to be a major headwind for the economy this year, shaving around 1 percentage point (pt) off annualized personal consumption expenditure (PCE) growth in 2013H1. As a result, we forecast a slowdown of consumption growth from a bit more than 2% in late 2014–currently tracking at 2.2% in 2012Q4–to 1.0% in 2013Q1 and 1.5% in 2013Q2.

In today’s comment we compare this forecast to the predictions from three models designed to estimate the effects of tax increases on consumption.

First, we consider an empirical model that traces out the effects of changes to disposable income on consumption. We construct a quarterly vector auto-regression (VAR) model that explains the (annualized) growth rate of real PCE with the quarter-on-quarter percentage change in real disposable income. We then trace out the response of real PCE growth to a 1.6% reduction in real disposable income in early 2013. The black bars in Exhibit 1 summarize our results. The model points to a sizable hit of 1.5pt to (annualized) real PCE growth in the first half of the year. The drag then diminishes to about 0.5pt in 2013H2. 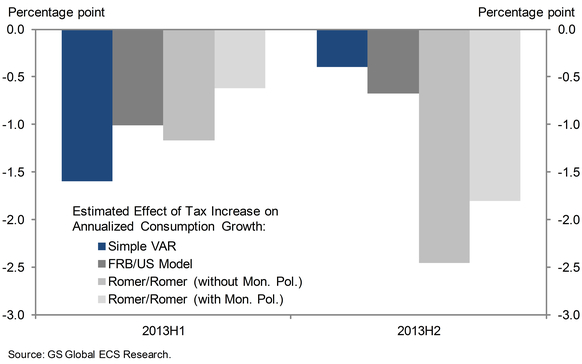 Second, we turn to the Fed’s large-scale econometric model of the US economy, FRB/US. The motivation is that FRB/US is far more comprehensive than our simple setup above, For example, it allows consumption to depend not only on current disposable income but also expectations about its future path. Within FRB/US we model the 2013 tax increase as a permanent 1.6% hit to expected lifetime disposable income. In effect, we assume that households expect the tax increase to remain in place for the foreseeable future. We then trace out the effect on consumption in the model. The results are broadly similar to the simple model above, pointing to a 1pt hit to annualized consumption growth in 2013H1 and 0.5pt in 2013H2.

Finally, we use the “narrative” data set constructed by Christina and David Romer of the University of California, Berkeley. It is based on detailed historical records from Congress and the US Treasury on legislated tax changes, with a special focus on “exogenous” changes that are not motivated by a desire to respond to changes in economic activity. (The intuition for their approach is that excluding tax changes that were conducted in response to the state of the cycle makes it easier to disentangle cause and effect of tax changes.) As in our simple approach above, we estimate a quarterly VAR that includes real PCE growth and the Romers’ measure of tax changes. We then trace out the effect of a 1.3% of GDP increase in taxes in early 2013 on real PCE growth. Although the results are similar for 2013H1–with a hit of around 1pt–the hit to consumption is much larger in the second half of 2013 than with the approaches above (Exhibit 1). Instead of fading away in 2013H1, the drag on consumption growth continues to build in the second half of the year. This conclusion is qualitatively similar–although less pronounced–when we allow for monetary policy to lean against the consumption hit.

We conclude that our forecast of a 1-percentage-point fiscal drag on consumption growth in 2013H1 is broadly consistent with our survey of alternative empirical models. This would probably imply a small decline in real personal consumption in January followed by slow but positive growth in subsequent months. The timetable of indicators discussed in yesterday’s comment should help us assess whether our forecast is correct.

But there are risks to our expectation that the fiscal drag will diminish in 2013H2. First, as the Romer and Romer approach shows, it is possible that the effects from the tax hikes on growth will continue to build in the second half of the year. If so, our forecast for a return of real GDP growth to a trend rate of 2.5% in the second half would be at risk.

Second, based on our reading of the debate in Washington, we have become more concerned about our assumption that the automatic spending cuts (or “sequester”) will be delayed into 2014. If the sequester takes effect as scheduled from March 1, this would present an additional downside risk to our growth forecast in the later part of the year.