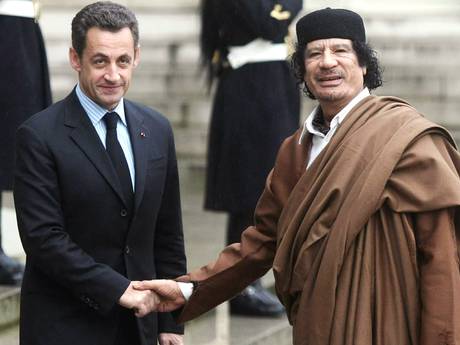 Sarkozy and Gaddafi pictured in Paris in 2007

The claim, leaked today, was made just before Christmas by a Lebanese-born businessman, Ziad Takieddine, who has been a fixer for legal – and allegedly illegal – dealings between France and the Middle East for 20 years.

Expanding on claims already made by one of Mr Gaddafi’s sons and a French investigative website, Mr Takieddine told an investigative judge that he could show him written proof that Mr Sarkozy’s first presidential campaign in 2006-7 was “abundantly” financed by Tripoli. The payments, he said, continued after Mr Sarkozy became President.

In total, he said, they exceeded the €50m in illegal payments to Mr Sarkozy claimed by Mr Gaddafi’s son Saif al-Islam just before the demise of the Libyan regime – thanks partly to French and British airstrikes – in 2011.

The Lebanese businessman is himself under formal investigation for allegedly organising and receiving illegal kick-backs on arms deals over two decades. He today admitted that his allegations against Mr Sarkozy were part of a proposed trade-off with the French judicial system.

He told the newspaper Le Parisien that he was ready to show investigators proof of Gaddafi’s alleged financial dealings with Mr Sarkozy if a judicial investigation was launched into Libya’s financing of French politicians. This implied that he was trying to minimise allegations against him, dating back to 1993, by igniting, or re-igniting, allegations which were more recent and more explosive.

The claims, however self-interested they may be, are deeply embarrassing for Mr Sarkozy. Mr Takieddine had close business and personal relations for many years with a string of centre-right politicians, including the former President’s childhood friend, Brice Hortefeux, his close ally and former interior minister, Claude Gueant[acute on e] and the current head of Mr Sarkozy’s centre-right party, Jean-Francois Copé. He is also known to have played a significant role in Mr Sarkozy’s dealings with Gaddafi to free Bulgarian nurses falsely imprisoned in Libya in 2007.

Allegations of illicit dealings with Gaddafi are especially sensitive for the former French president. With Prime Minister David Cameron, he organised and led the international support for the Libyan opposition which eventually led to Gaddafi’s downfall and death in October 2011.

Before that, however, Mr Sarkozy puzzled many of his own supporters by granting Gaddafi an obsequious and glittering state visit to France in December 2007. It later emerged that a number of contracts had been signed by France and Libya, including a deal to supply surveillance equipment to the Libyan intelligence services.

Mr Takieddine is under formal investigation for a number of alleged offences including receiving illegal kick-backs on French arms deals to Pakistan and Saudi Arabia in 1993-5. In a meeting on 19 December to discuss these allegations with Judge Renaud van Ruymbeke, Mr Takieddine offered to steer the French judicial system towards written evidence of kick-backs to Mr Sarkozy’s 2007 campaign. He said there had been a series of meetings to organise the payments in 2006-2007 between Mr Gueant, then Mr Sarkozy’s chief of staff, and Mr Gaddafi’s private secretary, Bashir Saleh.

Written accounts of these meetings, Mr Takieddine told the judge, had been handed to the former Libyan Prime Minister, Al Baghdadi al-Mahmoudhi. After the Libyan revolution, Mr Mahmoudhi sought and received unofficial asylum in France. He has recently been returned to Tripoli by Tunisia, having left France after Mr Sarkozy lost the presidential election in June last year.