2012 is the year the student loan bubble finally popped. While on one hand the relentlessly rising total Federal student debt crossed $956 billion as of September 30, and was growing at a pace that will have put it over $1 trillion by the end of 2012, the one data point confirming the size, severity and ultimately bursting of this latest debt bubble was the disclosure in late November by the Fed that the percentage of 90+ day delinquent loans soared from under 9% to 11% in one quarter. 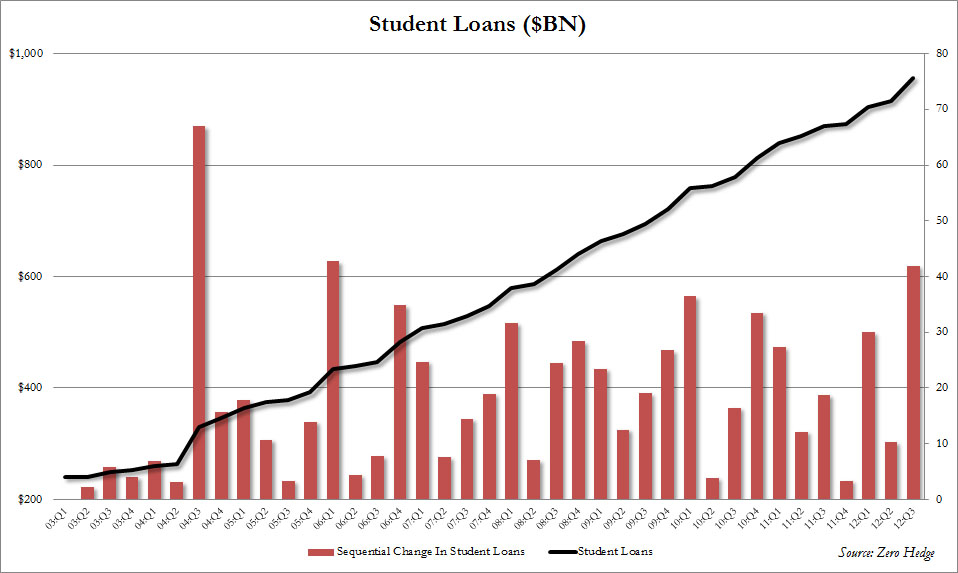 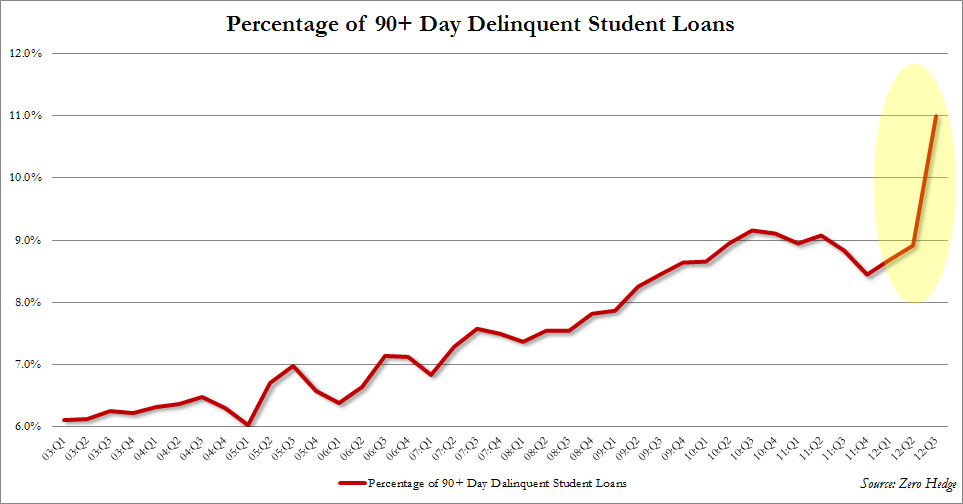 Which is why we were not surprised to learn that the Federal government has now delivered yet another bailout program: this time focusing not on banks, or homeowners who bought McMansions and decided to not pay their mortgage, but on those millions of Americans, aged 18 to 80, that are drowning in student debt – debt, incidentally, which has been used to pay for drugs, motorcycles, games, tattoos, not to mention countless iProducts. Which also means that since there is no free lunch, all that will happen is that even more Federal Debt will be tacked on to replace discharged student debt loans, up to the total $1 trillion which will promptly soar far higher as more Americans take advantage of this latest government handout. But when the US will already have $22 trillion in debt this time in four years, who really is counting? After all, “it is only fair” that the taxpayer funded “free for all” bonanza must go on.

The latest debt bailout, not surprisingly is not titled “Yet another taxpayer funded bailout for those who bought things they can’t afford on credit” as that would not be very politically prudent, especially for those politicians who still have taxpaying citizens as their voters. Instead, its name is the much more PC: “Pay as You Earn Repayment Plan.” Alas, it really should be called the former, because what it does is it incentivizes Americans to borrow even more Federal student loans, well aware that there will now always be a cap on the associated monthly interest payment which will never leave a mark regardless what the full underlying loan notional is. It also provides for full debt discharge should the borrowers end up with cushy Federal jobs – because the one thing the US government needs afford is more debt-saddled government workers.

What is the “Pay as You Earn Repayment Plan”? The WSJ explains:

A new federal program should make it easier for some recent college graduates to keep their student-loan payments manageable.

The new option, known as the “Pay as You Earn Repayment Plan,” lets eligible borrowers sharply lower their monthly loan payments and qualify for loan forgiveness quicker than they might otherwise.

“It’s a very good safety net for students who borrow too much,” says Mark Kantrowitz, publisher of the financial-aid site FinAid.org. “If your debt exceeds your annual income, you will probably benefit.”

Pay as You Earn, which took effect on Dec. 21, “is designed to help offset the effects of the recession for student borrowers most likely to take a hit in this tough job market,” says Lauren Asher, president of the Institute for College Access and Success, which has pushed for the creation of income-based repayment plans.

Which in the New Normal, means everyone with a student loan will benefit. It also means, that courtesy of knowing this safety net is there, more and more people will take advantage of the government’s latest generosity with other taxpayer’s money.

The new program comes at a time when rising student-loan balances—amid a still shaky job market—have weighed heavily on many families.

Typically, federal student loans must be repaid within 10 years. At current interest rates, that can work out to a monthly payment of roughly $300 for a borrower with $26,000 in debt.

Pay as You Earn, by contrast, limits student-loan payments to 10% of “discretionary income” as defined by government formulas. Borrowers who make regular payments could have the remaining unpaid amounts forgiven after 20 years.

So much for student debt being non-dischargeable: borrow hundreds of thousands, but make your monthly payment of a hundred or so bucks, and in 20 years you will be debt free, courtesy of US taxpayers. Actually, scratch that: one doesn’t even have to make a payment!

In some cases, borrowers with low incomes could be required to make a zero-dollar payment and would still be considered current on their loan. Monthly payments can increase or decrease each year based on the borrower’s income and family size.

For those who think getting full debt forgiveness in 20 years is far too long, why there’s a loophole for that too: just go “work” for Uncle Sam:

Borrowers with public-service jobs may qualify for loan forgiveness after just 10 years.

As for eligibility “constraints”:

The U.S. Department of Education’s Pay As You Earn calculator, available at studentaid.gov, can help you determine if you qualify. Borrowers can apply for the program online or by contacting the loan servicer that collects their payments on behalf of the federal government.

In other words, virtually all people who were responsible for the diagonal take off in the Federal student loan total in the current depression are now eligible for what will eventually be full debt discharge.

So let’s get this straight:

And there it is: incentives for the common, and very much broke, man in the New Normal.

If there is anyone out there who thinks this will not result in a “charge it” feeding frenzy and that the Federal student loan total will not go absolutely parabolic going forward, please raise your hand.

Of course, what is not discussed, is who is on the other side of all those forgiven loans. And the answer, dear taxpaying US readers, is starting at you in the mirror. Because all the Federal government will do is transfer the unfunded obligation, which has already been used to satisfy the purchase of goods and services, from one individual to the whole group.

But when one is dealing with the government of a country that is no longer even fit to be defined as “banana”, what is adding one more trillion between already insolvent counterparties.

Finally, yes, this means the Fed just tacked on one more year of QE to its $1 trillion/year in US debt monetization, which also means the Fed’s balance sheet will now also be used for to fund student loan forgiveness, among so many other things.

Insolvent students of the world, unite!