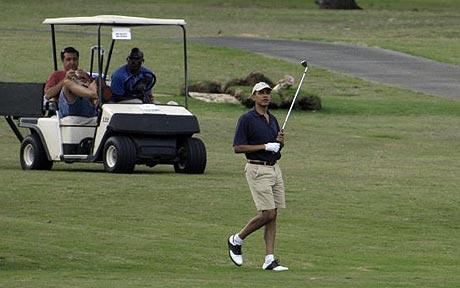 $16.4 trillion – that’s the latest figure for America’s massive national debt. Nearly $6 trillion of this debt was racked up in the first term of the Obama presidency – a 50 percent increase. It is horrifying to imagine what the debt will be when Obama leaves the White House in 2016, unless Congress has the willpower to stand in the way.

Meanwhile, as the world’s superpower is literally drowning in debt, President Obama is basking in the warmth of the beaches of Hawaii, at an exclusive resort way beyond the financial reach of most Americans. The president pays the cost of his own family’s accommodations, but there are a large number of associated costs which are paid from the public purse.

What is the actual cost of Obama’s lavish vacation to the American taxpayer? A staggering $7 million, according to veteran White House reporter Keith Koffler, who wrote in his blog earlier this week:

In a move that is rich in irony, President Obama agreed Tuesday night to sign an emergency deficit reduction bill that does almost nothing to rein in spending and then jetted out to Hawaii to resume his vacation at an extra cost of more than $3 million to taxpayers.

The price tag is in addition to more than $4 million that is already being spent on the Obamas’ Hawaii idyll, bringing the total cost of the excursion to well over $7 million.

The added cost was incurred because by the time the Obamas return from Hawaii – whenever that is – the president will have used Air Force One to travel to Honolulu and back twice.

The White House doesn’t like to publish the costs of presidential vacations, but Koffler has done the sums:

Air Force One is known to cost about $180,000 an hour to fly. Based on an estimated 18 hours roundtrip flying time for the jet between Washington and Honolulu, the travel cost alone of Obama’s decision to return to Hawaii amounts to around $3.24 million. And that doesn’t include the price tag for the massive security operation required to move the president or the cost of the cargo plane that follows Air Force One around.

As Koffler notes, President Obama could easily have saved taxpayers a good deal of money:

The Obamas could have saved taxpayers millions by returning from Hawaii together after Christmas and then resuming their vacation at one of the many ritzy resorts that lie outside of Washington. If the beach is a must, even a trip to Florida would have been far less expensive.

Or they could have simply stayed at the White House or Camp David, each a luxurious government-run installation, billing taxpayers a relative pittance.

According to Koffler, “the total cost to taxpayers of Obama’s vacations to Hawaii since becoming president is likely in excess of $20 million, and possibly much, much more.”

The message this sends is one of sheer contempt for the American taxpayer. $7 million may be viewed by the White House as a drop in the ocean compared to the overall size of America’s federal debt, but it is the principle that counts. The vast majority of American people simply couldn’t afford the kind of vacation enjoyed by the US president, not least at a time when 12.2 million Americans are still out of work.

For most of America’s embattled middle class, who, unlike the president have already returned to work, this kind of luxury is simply unimaginable in the current economic climate. And they’ve just been hit hard with a significant rise in their payroll taxes due to the expiration of the Social Security tax break. According to the Tax Policy Center, 77 percent of US households will now be paying more in federal taxes following this week’s fiscal cliff deal.

Barack Obama benefits from a largely deferential liberal press in the United States which rarely questions his opulence in office. It would be unthinkable for the British prime minister to act in the same manner. If David Cameron flew off to Hawaii and billed the British public £5 million for his Christmas vacation, he would be out of a job.

President Obama frequently calls on the American people to make sacrifices, but he is simply unwilling to lead by example and do so himself. In a speech in Virginia back in April 2011, Obama famously declared:

The president is elected to serve his country, rather than lord over it, a message which appears to be completely lost on the present White House. The federal government is simply running out of money, and America faces economic ruin unless spending is cut dramatically and the vast entitlements system is reformed. Barack Obama’s Hawaii vacation is merely a symbol of his wider presidency – a culture of impunity and extraordinary arrogance, reckless spending, a striking lack of accountability, and a shameless let them eat cake mentality. America’s middle class deserves to be treated better than this from a president who fails to practice what he preaches.