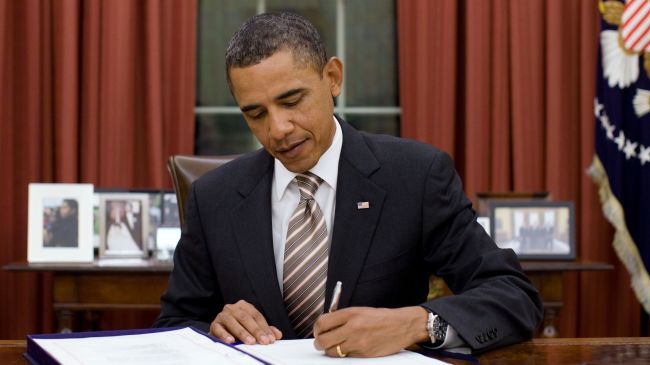 – US imposes fresh sanctions on Tehran, including ban on Iranian media (PressTV, Jan 4, 2013):

The United States has imposed fresh sanctions on Iran that include bans on the country’s media despite Washington’s claims of protecting freedom of speech.

The new bans are included in the $633-billion military bill for 2013 which US President Barack Obama signed into law on Wednesday night.

The anti-Iran sanctions portion of the bill, among other economic features, blacklists the Islamic Republic of Iran Broadcasting (IRIB) and its president Ezzatollah Zarghami and will block all the IRIB assets and prevent others from doing business with it.

The sanction against IRIB is an attempt by the West to silence Iranian media. It is on top of another flagrant violation of freedom of speech by satellite providers Eutelsat SA and Intelsat SA which stopped the broadcast of several Iranian satellite channels in October.

In November, the Hong Kong-based Asia Satellite Telecommunications Co. Ltd. (AsiaSat) also took all Iranian channels off air in East Asia under pressure from the US.

The restrictions on Iranian media are interpreted as an attempt to silence the truth-telling media.

This comes as US lawmakers say the fresh anti-Iran sanctions portion of the bill is part of measures aimed at pressuring Iran to halt its nuclear energy program.

The United States, Israel and some of their allies have repeatedly accused Iran of pursuing non-civilian objectives in its nuclear energy program.

Over the false allegation, Washington and the European Union have imposed illegal unilateral sanctions against the Islamic Republic.

Iran refutes the allegations and argues that as a signatory to the Non-Proliferation Treaty and a member of the International Atomic Energy Agency, it is entitled to develop and acquire nuclear technology for peaceful purposes.

1 thought on “US Imposes Fresh Sanctions On Tehran, Including Ban On Iranian Media”