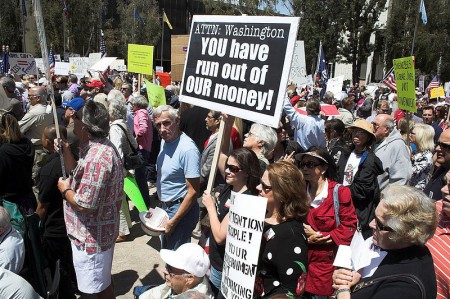 The middle class has quite a gift welcoming them as the calendar flips over to 2013.  Their payroll taxes are going to go up, their income taxes are going to go up, and approximately 28 million households are going to be hit with a huge, unexpected AMT tax bill on their 2012 earnings.  So happy New Year middle class!  You are about to be ripped to shreds.  In addition to the tax increases that I just mentioned, approximately two million unemployed Americans will instantly lose their extended unemployment benefits when 2013 begins, and new Obamacare tax hikes which will cost American taxpayers about a trillion dollars over the next decade will start to go into effect.  If Congress is not able to come to some sort of a deal, all middle class families in America will be sending thousands more dollars to Uncle Sam next year than they were previously.  And considering the fact that the middle class is already steadily shrinking and that the U.S. economy is already in an advanced state of decline, that is not good news.  You would think that both major political parties would want to do something to keep the middle class from being hit with this kind of tax sledgehammer.  Unfortunately, at this point it appears that our “leaders” in Washington D.C. are incapable of getting anything done.  So get ready for much smaller paychecks and much larger tax bills.  What is coming is not going to be pleasant.

Weren’t the tax increases only supposed to be for the wealthy?

Well, that is what the politicians always promise, but it is always the middle class that ends up getting hit the hardest.

In this day and age, the big corporations and the ultra-wealthy are absolute masters at avoiding taxes.

For example, Facebook paid approximately $4.64 million in taxes on their entire foreign profits of $1.344 billion for 2011.

That comes out to a tax rate of about 0.3 percent.

Overall, the global elite have approximately 18 trillion dollars parked in offshore tax havens such as the Cayman Islands.

Keep in mind that U.S. GDP for 2011 was only slightly above 15 trillion dollars.

So the global elite have an amount of money parked in offshore banks that is substantially larger than the total value of all goods and services produced in the United States each year.

According to one estimate, a third of all the wealth in the entire world is stationed in offshore banks.  Our politicians are playing checkers and the global elite are playing chess when it comes to taxes.  Our current system of taxation is irreversibly broken and should be entirely thrown out and replaced with something else.

And of course under our current system those that are poor don’t pay much in taxes because they are just trying to survive.

So who always ends up getting the painful end of the hammer?

The middle class does, and that really stinks.

Let us hope and pray that our politicians can come together and do something for the middle class.  In particular, we should all be screaming and yelling at our politicians about the Alternative Minimum Tax.  It was originally designed as a method to “tax the rich”, but unless Congress does something the middle class is about to be ripped to shreds by it.  The following is from a recent CNBC article about the AMT…

In a cruel epilogue to 2012, roughly 28 million families would owe the IRS $86 billion more than they anticipated for this year should the country plunge off the cliff, according to the nonpartisan Tax Policy Center.

Those families would face the “Alternative Minimum Tax,” which was introduced in 1969 to supposedly guarantee that wealthy Americans could not elude the taxman. But the AMT not only flopped, it was never indexed to inflation. So with each passing year, it seeps away from high society and into the wallets of Target and Wal-Mart shoppers. That sets up a disaster for April 15.

So how much money are we talking about?

According to that same article, many families are about to be socked by tax bills that will be absolutely huge…

Most of the tax increases that will be coming as a result of the fiscal cliff will be for 2013 earnings, but the AMT tax hike will apply to 2012 earnings.  So if you end up falling under the AMT, you better get ready to write a very large check to Uncle Sam in just a couple of months.

And the AMT is only just one of the very painful tax increases that American families will be facing.  If no deal is reached in Congress, every single middle class American taxpayer will be dealing with significantly higher taxes.

A recent ABC News report entitled “Fiscal Cliff: By The Numbers” detailed some of the other tax increases that you can expect in 2013…

So why don’t our politicians do something about all of this?

What are they fighting so bitterly about anyway?

Sadly, neither side is actually serious about substantially reducing the size of government deficits or about getting government spending under control.

During a recent interview on CNBC, Ron Paul explained that “they pretend they are fighting up there, but they really aren’t. They are arguing over power, spin, who looks good, who looks bad; all trying to preserve the system where they can spend what they want, take care of their friends and print money when they need it.”

Most in the mainstream media are making it sound like some kind of a “battle royal” is going on in Washington, but as Lou Dobbs recently pointed out, the U.S. national debt is going to end up in just about the same place no matter what happens.

According to Dobbs, if we “do nothing” the U.S. national debt will be approximately 25.8 trillion dollars in 2022.

If “Boehner wins”, the U.S. national debt will be approximately 25.2 trillion dollars in 2022.

You can watch the entire analysis by Lou Dobbs right here…

So they are putting all of us through all of this torture even though nothing will really change in the long run no matter who wins?

What kind of a circus is this?

Barack Obama has just issued a new executive order that ends the pay freeze for federal workers that had been in place.

So now all federal employees will be getting a nice hefty pay raise.

For example, Vice President Joe Biden brought in $225,521 this year.

Not that our politicians really need the money.  Most members of Congress are millionaires anyway.  But if they can get us to pay for it, they might as well go for it, eh?

There are now close to half a million federal employees that bring home at least $100,000 a year.  Plus, it is important to keep in mind that the benefits that federal employees get are absolutely outstanding, and it is close to impossible to actually fire a federal worker.

Life is good if you are working for Uncle Sam.

Meanwhile, our politicians seem determined to keep draining more blood out of the middle class.  Even if a “deal” is reached, we will still be hit by some categories of tax increases.  Let’s just hope and pray that we don’t get hit by all of the tax increases that are scheduled to go into effect.  That would be a financial disaster for millions of families.

So happy New Year middle class.  Your taxes are about to go through the roof and our politicians are too busy fighting with each other to do anything about it. 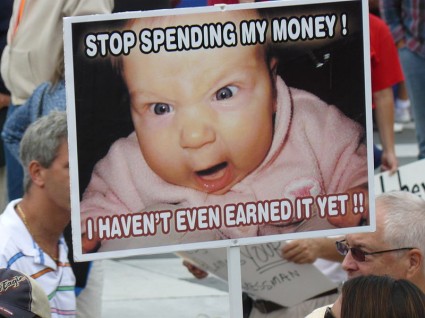