Writing for Wired’s Danger Room, Axe says, “When the deployments are complete in 2017, Air Force F-22s and B-2s and Marine Corps F-35s could all be within striking range of America’s biggest economic rival at the same time.” 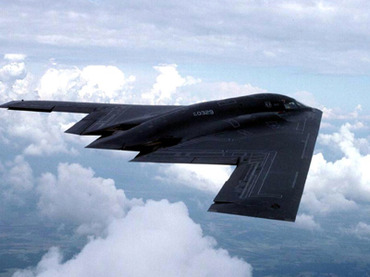 The United States’ presence in the Asia-Pacific is about to be much more impressive: by 2017, the US is expected to have all but surrounded China, its number one economic rival, with fleets of the most advanced stealth warplanes in the world.

According to recent reports from some of the Pentagon’s top-brass, Uncle Sam will be essentially surrounding the United States’ top competitor in only five years’ time. By 2017, the Air Force’s F-22s and B-2s, as well as a fleet of the Marine Corps’ F-35, will all be deployed east.

News of the long-term plan stems from a report by Wired’s David Axe this week, who notes that several recent interviews with Defense Department officials suggest that the Obama administration’s “strategic pivot” plan in Asia announced earlier this year hasn’t been ignored just yet.

In June, the Pentagon revealed plans to restructure the US military so that 60 percent of its warships would be in the Asia-Pacific by 2020. At the time, Defense Secretary Leon Panetta said the decision was not meant to intimidate China, but was rather a common sense response to make sure America’s resources were divvied out where they might be most needed.

“Some view the increased emphasis by the United States on Asia-Pacific as a challenge to China, I reject that view entirely,” Panetta said this summer.

As recently as November, the secretary said of Asia, “We’re going to continue to invest in the region,” but that “It’s going to take a lot of work and a lot of focus.” Now only weeks later, the pieces are already being put in place.

Speaking of the B-2 bombers last month, 8th Air Force Commander Maj. Gen. Stephen Wilson told Air Force Magazine that fleets “will rotate to forward operating locations all over the world in small numbers for a few weeks at a time,” with those operations “beginning with a short Pacific deployment” in early 2013.

That news takes on a whole new light following an address from Sec. Panetta at the National Press Club in Washington last week, where he announced “new deployments of F-22s … to Japan” and confirmed that the Pentagon is “laying the groundwork” for F-35s to be in Japan by 2017.

“[W]e still have to maintain our global leadership and presence by building innovative partnerships and partner capacity across the globe and using these innovative rotational deployments as a way to do exercises and training with other countries, developing their capabilities so that they can help provide for their own security,” Panetta said.

Writing for Wired’s Danger Room, Axe says, “When the deployments are complete in 2017, Air Force F-22s and B-2s and Marine Corps F-35s could all be within striking range of America’s biggest economic rival at the same time.”

“With Beijing now testing its own radar-evading jet fighters — two different models, to be exact — the clock is counting down to a stealth warplane showdown over the Western Pacific,” he says.

When the Pentagon first discussed its “strategic pivot” earlier this year, Sen. Joe Lieberman, (I-Connecticut) dismissed rumors of an eventual skirmish, saying, “China and the US are so tied together economically and another Cold War is not in the interest of either that ultimately common sense will prevail.”

Regardless, the Obama administration’s current plan will position more than half of the United States Navy to the Asia-Pacific region by the end of the decade.

“Increased US involvement in this region will benefit China as it advances our shared security and prosperity for the future,” claimed Panetta.