As we reported previously, today Iran decided to launch a rather impromptu “massive” naval drill dubbed the Velayat 91, which will take place in the Oman Sea, North of Indian Ocean, in the Persian Gulf and East of Strait of Hormuz, and will cover an area of one million square kilometers right in the sweet zone of the US 5th Naval Fleet’s AOR, where in addition to other resources, both the Stennis aircraft carrier and Peleliu amphibious warfare ship group are located. As PressTV reports, “On the first day of the drills, ships and submarines, will go to their locations and get ready for the tactical stage of the maneuvers. Forces in shores will also get ready for the tactical phase of the drills. In addition our 23rd fleet will be deployed to the high seas to protect commercial ships and oil tankers and to counter piracy in Gulf of Aden.” All this will be taking place within kilometers of both the busiest seaborne transit corridor of crude oil in the world, as well as the headquarters of the US 5th Navy in Bahrain. What could go wrong.

Iran’s Navy Commander Rear Admiral Habibolah Sayyari told us about the aim of these drills and its message for Iran’s enemies and friends.

The aim of the Velayat 91 Drills is to show the strength of Iran’s Navy and its ability to defend the country’s territorial waters, its interests and its resources in the sea.

The drills also demonstrate Iran’s ability to bring sustainable security in the region. The drills have a message of peace for the countries in the region and it conveys to its enemies that the Iranians are serious about protecting their borders, interests and resources.

The top commander also stated that Iran’s Navy on the first day of the drills will send a fleet of warships to the high seas to display its power and more.

As Stratfor reminds us, this is where US naval assets are located in relation to the 6-day wargame: right in it, in other words the probability for an accident, whether predetermined, false flagged, or otherwise, is high to quite high. 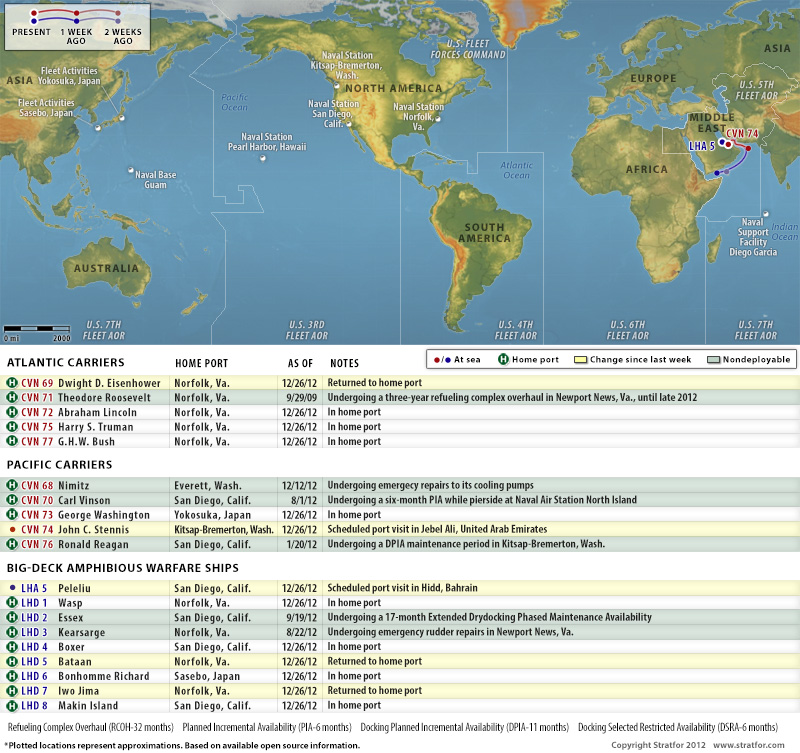 And some videos of what is currently going on in the Arabian Gulf: