– As BOJ Holdings Surpass ¥100 Trillion, It Gets An Ultimatum: “Stop Being Independent Or Lose Your Independence” (ZeroHedge, Dec 23, 2012):

2013, which is still a week away, is already off to a ‘crazy pills’ bang. Because while the bulk of the politipunditry is shocked, shocked, that it was dead wrong about the Cliff outcome which is now set to ram the country front and center on January 1, the most amusement appears to be emanating from the land of the rising sun, where the brand new PM just issued an ultimatum to the central bank, which can be summarized as follows: stop being independent, or we will change the laws and take away your independence.

This is merely the latest attempt by a government – which obviously knows better than the collective known as the market (or was the market before central-banks decided to make a mockery of the term) to define both fiscal and monetary policy, the way Goldman Sachs has been able to do for decades in the US, Europe, and now UK.

What, however, guarantees the fun factor this time is that Abe, as the FT summarizes, already had a stint in control back in 2006-2007 which “ended amid ill health, scandal and policy failure.” Specifically, it ended in a bout of explosive diarrhea as we reported previously (no seriously) which was the scapegoat to “justify” Abe’s early retirement. So where Abe failed, with limited intervention, he will now succeed with virtually unlimited control over both the fiscal and monetary apparatus. One can now see where the amusement possibilities are virtually unlimited.

Shinzo Abe, Japan’s prime-minister-in-waiting, has threatened to revise the law governing the Bank of Japan if it refuses to introduce a 2 per cent inflation target at its January policy meeting.

It marks the most explicit challenge yet from Mr Abe to the independence the central bank has enjoyed since 1998 in setting monetary policy.

At a monetary policy meeting last week, the BoJ board announced an expansion of its current asset buying programme but stopped short of bowing to Mr Abe’s target demand, saying only that it would discuss the issue at its next gathering, in late January.

“If, regrettably, that does not happen, then we will revise the BoJ law and put together an inflation targeting accord [between the government and central bank],” Mr Abe said on Sunday.

As well as adopting the new inflation target, the BoJ should also take on responsibility for promoting employment, he said.

In fact, it would be best if the BOJ simply starts doing everything that the Japanese government had been trying to do for the past 30 years and failing. That way Abe can avoid using diarrhea as an alibi in 2014 when his latest bout of policies are confirmed to be even more catastrophic than before.

Yet the main reason for this ridiculous approach to openly sequestering the central bank’s “independence” which was never there to begin with, is because Japan is merely jumping on the same bandwagon that the US, Europe and soon, the BOE are on: the bandwagon that demands unlimited easing until a given economic goal is reached.

Sadly, the paradox is that it is precisely the central banks’ interventions that make achievement of such goals impossible, but that is a topic for a different post.

For now, all that needs to be pointed out is that the BOJ is about to lose any last trace of independence just as its balance sheet surpasses JPY100 trillion, just as total Japanese debt surpasses JPY1 quadrillion. From Bloomberg:

The Bank of Japan’s holdings of the government’s bonds exceeded 100 trillion yen ($1.2 trillion) for the first time, raising the risk that yields will jump on perceptions that it is financing public spending.

The central bank held 104.9 trillion yen of the debt at the end of September, 11.1 percent of all government bonds, a quarterly central bank report showed today in Tokyo. The BOJ said it was the highest on record. Bond holdings by foreign investors rose to a record 9.1 percent. 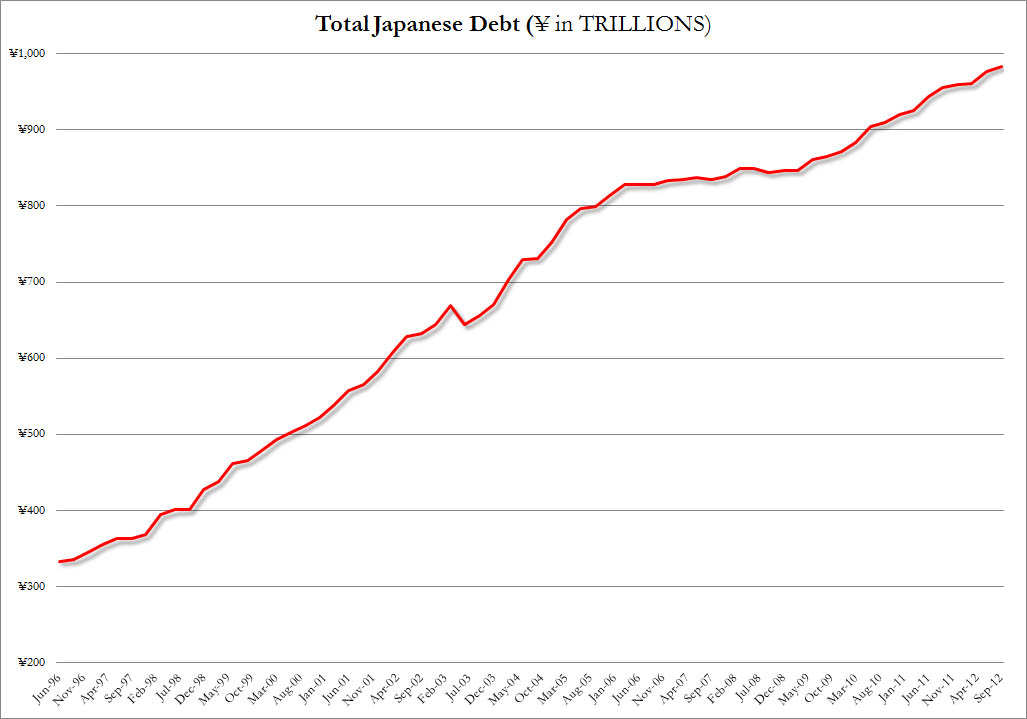 Most importantly, the Japanese government is about to force the BOJ into overdrive at a time when even the tiniest increase in public funding costs, courtesy of total debt/GDP which in one year will surpass 250%, will mean every incremental Yen of government revenues will go to paying down nothing but interest on the debt. 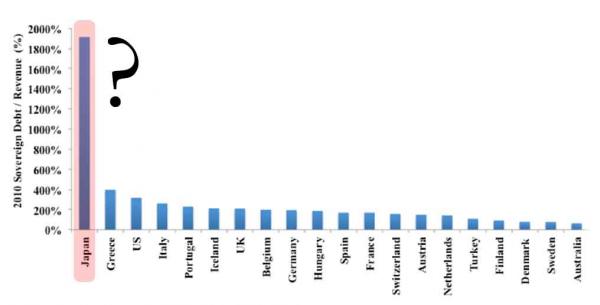 So while Japan appears to finally be on the verge of that bond funding crisis it has been able to offset for nearly three decades, at least the Yen will plunge. Sounds like a fair tradeoff.

We, for one, can wait to write about Abe’s -2% deflationary “target” when Japanese inflation is in the double, triple or much more, digits.