If you were wondering why the Argentinian leadership were unwilling to pay off a few ‘annoying’ hedge funds with a few billion dollars (and were pissed about losing one yacht), then perhaps this report from the BBC will enlighten. Argentina authorities have sent hundreds of troops to the southern city of Bariloche after a spate of looting. Critically, Bariloche is not some shanty-town, it is one of the nation’s most popular ski resorts and ‘relatively’ affluent. The following clip sums up the dangerous situation the nation finds itself in, despite the government’s assurances that this is a “false picture of social and political collapse.” Looks real to us?
Click image for link to clip (not embeddable) 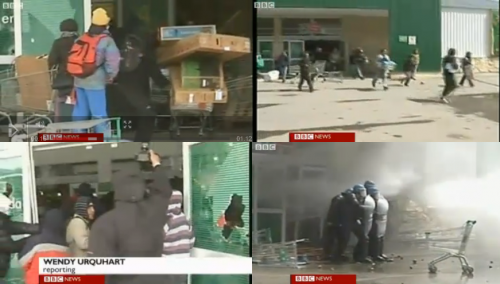 Argentine authorities have sent hundreds of troops to the southern city of Bariloche after a spate of looting.

At least three supermarkets in the popular ski resort were targeted, causing panic among local residents and tourists.

Dozens of people, many with their faces covered, broke into the supermarkets stealing electronics, toys and clothes.

“With this type of action, these groups have been trying to paint a false picture of social and political collapse,” the provincial authorities said in a statement.

The attacks took place in San Carlos de Bariloche, an Andean resort popular with tourists from other South American countries.

Local police said other shops and depots on the outskirts of the town were also targeted by looters. All shops closed after the thefts.

President Cristina Fernandez de Kirchner has been in constant communication with the province’s governor, according to her spokesman Juan Manuel Abal Medina.

He said the Bariloche attacks were linked to the sabotage of power lines earlier on Thursday in the neighbouring province of Neuquen.