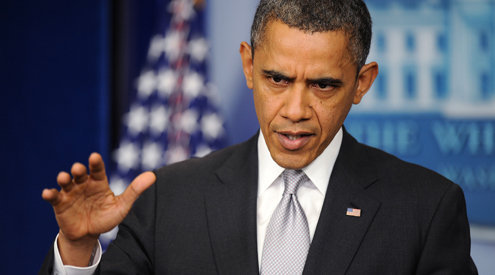 WASHINGTON — President Barack Obama urged Congress on Wednesday to ban the sale of military-style assault weapons and high-capacity ammunition clips and said Vice President Joe Biden would lead an effort to stem an “epidemic of gun violence that plagues this country every single day.”

Obama said he’d asked Biden to deliver his recommendations by next month, and the president pledged to move quickly to enact them.

“This is not some Washington commission,” Obama said, speaking at the White House five days after a lone gunman in Connecticut opened fire in an elementary school with a semi-automatic rifle, killing 20 first-graders and six adults. “This is not something where folks are going to be studying the issue for six months and publishing a report that gets read and then pushed aside. This is a team that has a very specific task to pull together real reforms right now.”

The Biden-led team, which will include members of the president’s Cabinet and outside organizations, also will look at improving access to mental health services and, Obama said, at a “culture that, all too often, glorifies guns and violence.”

The president argued that there’s a growing consensus for stepped-up gun control, contending that a majority of Americans support banning the sale of military-style assault weapons and high-capacity ammunition clips. He said most Americans also supported background checks before gun purchases, including those at gun shows, and he urged the incoming Congress to vote on gun control “in a timely manner.”

The powerful gun lobby has resisted most new regulations. Obama said he believed that the Second Amendment “guarantees an individual a right to bear arms,” but he added that he also believes that most gun owners think the U.S. “should be able to keep an irresponsible, lawbreaking few from buying a weapon of war.”

Though the mood in Congress on gun control has shifted since the Connecticut massacre, it’s not clear whether Republicans, who control the House of Representatives, will soften their opposition to a ban on assault weapons.

Incoming House Judiciary Committee Chairman Robert Goodlatte, R-Va., pledged to “listen to and carefully review suggestions made by the president’s task force and other groups to see what we can do to prevent a terrible tragedy like this in the future.”

“This time is different. You know the time is different because there’s so much anger,” said Rep. Carolyn McCarthy, D-N.Y., whose husband was killed in a shooting on the Long Island Rail Road in 1993.

It’s different for two reasons: Democrats are actively pushing for change, after years of not pressing the issue, and many Republicans are at least hesitant to speak out against gun control.

Sen. Charles Grassley of Iowa, the top Republican on the Senate Judiciary Committee, said it was “time to study these mass shootings.”

Senate Republican leader Mitch McConnell of Kentucky, when he was asked whether it’s time to act on gun control, deferred to Majority Leader Harry Reid, D-Nev.

Reid said this week that he was willing to consider different proposals, saying that “every idea should be on the table as we discuss how best to keep our children safe.” That stance is emblematic of a subtle but important shift among Democrats, who for years have largely shied away from considering major gun legislation.

Chairing the panel will be Rep. Mike Thompson, D-Calif., a gun owner, avid hunter and former co-chairman of the Congressional Sportsmen’s Caucus who describes himself as a “combat veteran who carried an assault rifle in Vietnam.” But he’s adamant about gun control.

“Military-type assault weapons and assault magazines have no place on our streets and in our communities,” he said.

Obama has supported reinstating an assault weapons ban that expired in 2004, but he hasn’t championed legislation to make that happen. He said Wednesday that he’d been busy with the economy and two wars.

But, he added, “I think all of us have to do some reflection on how we prioritize what we do here in Washington.” And he said the shooting in Newtown should serve as a “wake-up call for all of us to say that if we are not getting right the need to keep our children safe, then nothing else matters.”

Obama often has sought to pressure Congress by taking his case to the public.

“If we’re going to change things, it’s going to take a wave of Americans – mothers and fathers, daughters and sons, pastors, law enforcement, mental health professionals and, yes, gun owners – standing up and saying ‘Enough’ on behalf of our kids,” he said.

New York Mayor Michael Bloomberg, who’s championed gun-control efforts, hailed Obama’s move, but he added that there are several immediate steps the president can take, including a recess appointment of a new director for the Bureau of Alcohol, Tobacco, Firearms and Explosives.

The Brady Campaign to Prevent Gun Violence, which brought family members and victims of shootings to meet this week with White House senior officials, called Obama’s urgency on the task force a “tremendous step forward.”