With the entire “market” a synthetic algo-traded derivative (and facilitated by the fat pipe between Liberty 33 and Citadel) reflecting merely where the ES and VIX trades, and completely ignoring such trivial things as underlying corporate cash flows (see next post on market performance vs earnings) or GDP, concerns about fundamentals have become a total joke. This is obviously exacerbated by such “extenuating” circumstances as tropical storms which are designed to make any negative data irrelevant. Of course, for those still curious about such old school metrics as actual economic performance, untainted by Fed intervention (such as $85 billion in offsetting flow per month), here is one chart, showing the correlation between total FedEx package shipments and Real GDP. And no, sorry, you can’t blame this one on Sandy, on the Cliff, or any of the other spin talking points. From Bloomberg: “The level of FedEx package shipments began to slump as early as the first quarter of 2012 and now appears to be signaling weaker economic conditions for 2013. In late March, FedEx made mention of cooling conditions, with CFO Alan Graf noting the economy was not as strong as  the company hoped it would be a year earlier. According to Fred Smith, FedEx CEO, “Fundamentally, what’s happening is that exports around the world have contracted and the policy choices in Europe and the United States and China are having an effect on global trade.“ 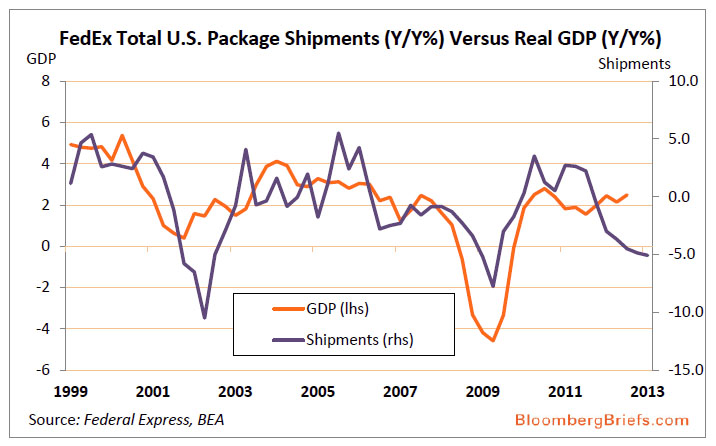