“America is crumbling from within and even the wanton killings of the innocent children of Sandy Hook Elementary School have failed to touch hearts hardened over long years of brutality.” 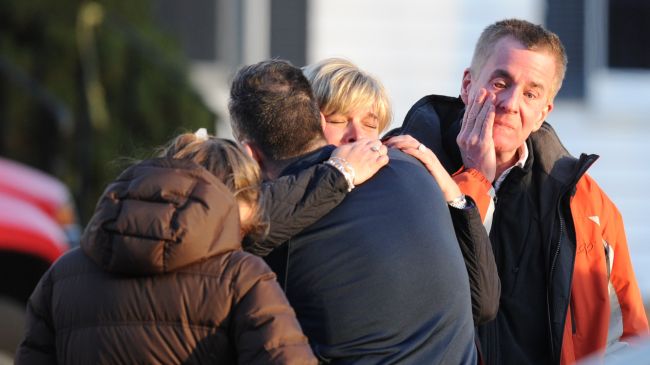 America is a nation that has known tragedy but will never be able to come together in suffering and support.

America is crumbling from within and even the wanton killings of the innocent children of Sandy Hook Elementary School have failed to touch hearts hardened over long years of brutality.

The murder of twenty children, mostly five and six-year-olds, in an otherwise peaceful town in Connecticut is conveniently called a “tragedy.” It is much more than that.

I refer to the children only though there were seven adults that were butchered also. Children represent something that is supposed to be universal to all of us, something everyone can understand, parents, grandparents, siblings, the idea of a small child, forty pounds, not yet four feet tall, shot nearly a dozen times with a precision Swiss semi-automatic pistol, this should be a picture all can draw common horror from.

I see the scene “in my head,” twenty children blown to pieces, I picture myself as one of the police officers entering the scene. As a former soldier, it is not hard to imagine this scene; I see versions of it every time I sleep, as do so many others.

The butchery should be unimaginable but it is not.

I would be remiss if I did not point out that an almost identical scene, perhaps even more ghastly, more children dead, happened in Gaza only a few short days ago.

President Obama was silent on this.

We could also talk about the other killings, so many, so often, mass murders, Breveik’s seventy seven in Norway, all children albeit a bit older or so many attacks, America, Europe, some murders, some from war.

The blood pools, the blood of the children of Sandy Hook Elementary School had not begun to dry, to take on that reddish brown hue we know so well before the busy little minds of America’s political opportunists kicked into “high gear.”

First was Mike Huckabee, former governor of Arkansas, former presidential hopeful, current spokesman for Rupert Murdoch’s “Fox News.” Huckabee inferred that the murders were the “will of god.”

“We ask why there is violence in our schools, but we have systematically removed God from our schools… should we be so surprised that schools would become a place of carnage?”

Congresswoman Michelle Bachman of Minnesota equates violence in schools with “Jihadi lunches.” Bachman pointed out that schools that served “terrorist lunches” that included falafel or hummus, substances she believes likely to draw down the “wrath of god,” are responsible.

Within five minutes of the first reports, mass emailings originating from “think tanks” tied to the National Rifle Association, an ultra-right wing, pro-Israel group, credited President Obama and the CIA with planning the attack.

Many spoke of how the president faked his tears, knowing well he had personally ordered the carnage as part of a plot to seize America’s guns and implement what was actually the totalitarian regime promised by his former electoral opponent, Mitt Romney.

The emails claimed that Adam Lanza, thus far seen as the lone shooter, was part of a mind control program to bring about a slaughter akin to the Jonesboro killings that are cited as responsible for Australia’s draconian weapons laws.

I am sure that millions of dollars were sent to the NRA and tens of thousands of Americans rushed out to buy the same weapons Lanza is reputed to have used during his “kindergarten killing spree.”

Not to be outdone, the Israeli papers, the Jerusalem Post in particular, focused on six-year-old Noah Posner, the only Jewish victim.

Though Noah’s parents have our heartfelt condolences, the Post simply does not understand what their “take” on the tragedy tells the rest of us:

The loss of the life of a wonderful little boy was stained with what can only be called the filth of hate and racism. This is inexcusable.

“Goyim were born only to serve us. Without that, they have no place in the world; only to serve the People of Israel,” he said during a public discussion of what kind of work non-Jews are allowed to perform on Shabbat.

“Why are gentiles needed? They will work, they will plow, they will reap. We will sit like an effendi and eat,” he said to some laughter.

Yosef, the spiritual leader of the Shas Party and the former chief Sephardi rabbi of Israel, also said that the lives of non-Jews are protected in order to prevent financial loss to Jews.

“With gentiles, it will be like any person: They need to die, but God will give them longevity. Why? Imagine that one’s donkey would die, they would lose their money. This is his servant. That’s why he gets a long life, to work well for this Jew,” said the rabbi, who recently turned 90.

As offensive as Rabbi Yosef’s statements were, the Post very much reflected these values.

Not to be outdone, the anti-gun lobby has also begun flooding the news, flooding the Internet and pushing their “pet” political puppets like Senator Charles Schumer of New York, into instituting broad gun control.

Americans own hundreds of millions of guns, literally. The lowest numbers surveyed indicate Americans own over two hundred million guns. The real number is twice that.

What are not taken into account are the reasons:

1. Guns are the only “durable commodity” a citizen can own that cannot be devalued or depreciated through financial collapse. Guns are the only real form of wealth for the average American, with currency in doubt, pensions unprotected, the bond and equity markets in near collapse and most real estate in “free fall” decline.

America has to accept that these killings, in America as elsewhere, are the real “terrorism,” home grown, perhaps at times, government-sponsored conspiracies.

A survey that will never be taken, one that could never be published involves the “tragedy” of 9/11. Eleven years later, no rational person can accept the government report.

In fact, those who wrote the report, including John Farmer, former Attorney General of New Jersey and chief legal architect of the 9/11 Commission Report indicted in his 2009 book as reviewed by this author in 2009.

“John Farmer’s Book: The Ground Truth: The Story Behind America’s Defense on 9/11 Farmer builds the inescapably convincing case that the official version… is almost entirely untrue…

The 9/11 Commission now tells us that the official version of 9/11 was based on false testimony and documents and is almost entirely untrue. The details of this massive cover-up are carefully outlined in a book by John Farmer, Senior Counsel for the 9/11 Commission.

Farmer, Dean of Rutgers Universities’ School of Law and former Attorney General of New Jersey was responsible for drafting the original flawed 9/11 report.

Does Farmer have cooperation and agreement from other members of the Commission? Yes. Did they say Bush ordered 9/11? No. Do they say that the 9/11 Commission was lied to by the FBI, CIA, Whitehouse and NORAD? Yes. Is there full documentary proof of this? Yes.

Farmer states… “at some level of the government, at some point in time… there was an agreement not to tell the truth about what happened… I was shocked at how different the truth was from the way it was described… The [NORAD air defense] tapes told a radically different story from what had been told to the public and us for two years… This is not spin. This is not true.’”

Thus, when the conspiracies are unfolded about Sandy Hook School, how Adam Lanza, alone or with one or more accomplices, Adam Lanza, son of Peter Lanza, Vice President of GE Capital and partner at the giant accounting firm, Ernst and Young, how this young man, with military weapons, body armor, dressed as a Navy SEAL, murdered twenty seven people, Americans go from shock to disbelief to seeking conspiracies.

9/11 brought us there and America will never be the same.

The Sandy Hook School murders were not isolated events. They are a trend, one that has long taken root in America, a trend misconstrued, a trend misidentified, a trend we are afraid to put a real name to.

The simple truth is not that we have left god out of schools as Huckabee claims or that children are eating “Jihadi ‘chick peas’” as the reprehensible Michelle Bachman blithers on about.

Failing to recognize this for so long, we can now look around us, particularly to those of power, those of wealth, those who seek authority, those who yearn for privilege.

We can look there and find it.

We see evil, we are surrounded by it, we recognize it, identify it easily and our chosen solution in most cases is to oppose it by hoping it will simply go away.