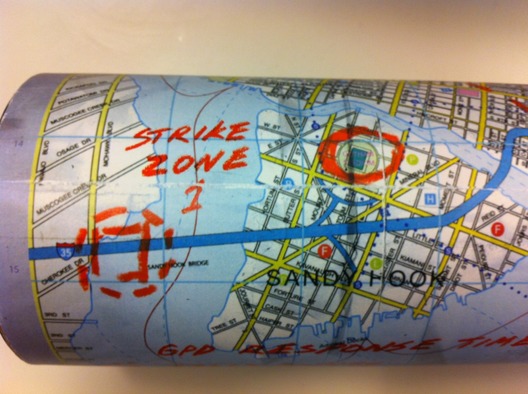 The confirmed discovery that at 1hr:58 of the Dark Knight Rises, Commissioner Gordon is pointing to the words “Sandy Hook” on a map of the Gotham area has caused a storm of interest.

As it should—since 27 people were just killed at the Sandy Hook Elementary School, and in the Dark Knight film, “Sandy Hook” is indicated as a target for attack.

Unless, of course, one wants to believe this is merely a boggling coincidence, one that accidentally ties the Batman theater massacre to the Connecticut school massacre.

In that case, add to the list of coincidences the fact that Suzanne Collins, the author of The Hunger Games, in which 23 children are ritually sacrificed in arena competition, lives in Newtown/Sandy Hook, and in real life someone(s) just killed 20 children in the Sandy Hook Elementary School.

This is the familiar “Joker” mode of secret societies, in which little foreshadowing clues are placed in significant places. Michael Hoffman, author of Secret Societies and Psychological Warfare, comments on “The Method”: “…a clown-like, grinning mockery of the victim[s] as a show of power and macabre arrogance…performed in a veiled manner accompanied by certain occult signs and symbolic words…They brag to us about what they’ve gotten away with…”

It’s also a coincidence that the east coast of America sustained horrendous damage from a storm called Sandy recently.

It’s also a coincidence that an island called Sandy, New Caledonia, had been located on many maps until 2012, when an Australian surveyor ship concluded that it had never existed, and it was promptly disappeared from authoritative maps of the area. “Destroyed.”

Then there is the coincidence involving the Aurora theater, just before the massacre there this summer, when during film trailers, before The Dark Knight Rises premiered, a preview of Skyfall was shown, and on a building appeared, in red letters, “Aurora.”

More Dark Knight Rises coincidence: the studio sent out a promotional package before the film premiered this summer. An included map clearly showed Sandy Hook, within, or just south of, “Strike Zone 1,” where an attack would be launched. (Click through to enter site.)http://www.ugo.com/movies/the-dark-knight-rises-viral-package

More coincidence: there is a book called “The Dark Knight Manual.” In the book, there is a map as well. But on this map, at the very bottom, Sandy Hook is “South Hinkley.” (Click to enlarge.)

Does that name Hinkley ring a bell?

Just another coincidence that John Hinckley is the person convicted of attempting to assassinate President Reagan on March 30, 1981.

Hinckley—former psychiatric patient, drugged, and, some say, operated on with mind control techniques to set him up as the patsy in the attempt on Reagan’s life.

Hinckley—son of an oil man who was George Bush the Elder’s big-time presidential supporter. John Hinckley’s brother Scott had a dinner booked at Neil Bush’s house the day after the Reagan assassination attempt. Scott had to cancel.

Obsessed with yet another film, Taxi Driver, and its child star, Jody Foster, young Hinckley, according to received wisdom, planned the attack on Reagan to impress Foster—whom he had stalked, going so far as to take a writing class at Yale, where Foster was matriculating.

What and who is at Yale in New Haven, a few miles from Newtown? Historically, exactly the kind of men who, bent on controlling America, engaged in occult rituals, taking blood oaths. Secret society men. Diabolical Skull&Bones men who, for example, supported the Nazi war machine and Hitler, who in turn slaughtered millions. Nazi financiers like Prescott Bush of the Bush-family Skull&Bones members.

But all these things are coincidences and accidents, and there is absolutely nothing to see or think about or connect.

No pieces of this connect at all.

Ask any android. He’ll tell you. “Nothing to see, keep moving, eyes straight ahead.”