The duchy of Cornwall gave the prince an income of £18m last year, but says it is not subject to paying corporation tax 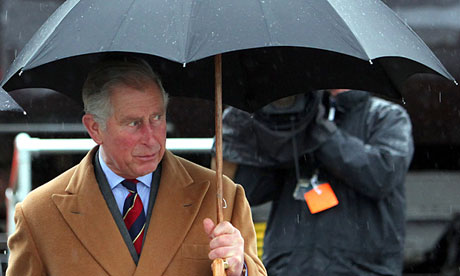 Prince Charles. As well as the duchy income, last year the prince received £2.2m in grants from the taxpayer to pay for his travel by private jet, helicopter and train, and the upkeep of Clarence House. Photograph: Geoff Caddick/PA

The duchy of Cornwall last year provided Charles with an income of £18m and HMRC’s anti-avoidance group is now being asked to examine its non-payment of corporation tax following a potentially significant court ruling on its legal status.

The issue has been raised by an accountant investigating the tax affairs of the duchy – an agricultural, commercial and residential landowner.

He has analysed the impact of a judicial ruling handed down last year. Anti-monarchy campaigners claim it shows the duchy is running “a well-entrenched tax avoidance scheme”.

The duchy insists it “is not subject to corporation tax as it is not a separate legal entity for tax purposes”. But John Angel, principal judge at the information rights tribunal, ruled last December it was a separate legal body to the prince.

Accountants now believe the ruling could leave the duchy exposed to the 24% levy on profits other organisations must pay. Any change to its tax status could result in a cut to the prince’s income.

Republic, the campaign for an elected head of state, has asked HMRC’s anti-avoidance team to investigate whether the ruling means the duchy is now “using a highly questionable interpretation of its legal status as a means of avoiding corporation tax obligations”.

A spokesman for HMRC said it would evaluate the information and “take appropriate action”. There is no suggestion any law has been breached. Clarence House strongly denies claims of avoidance.

The move comes as the House of Commons public accounts committee, which earlier this month criticised Starbucks, Google and Amazon for their “immoral” decisions to avoid paying more corporation tax, prepares to hold a hearing next year into the royal finances. As well as duchy income, last year Charles received £2.2m in grants from the taxpayer to pay for his travel by private jet, helicopter and train and the upkeep of Clarence House.

He voluntarily paid tax of £5m on his £18m income from the duchy last year, which Clarence House said was at the full 50% rate after deductions from expenses.

The duchy owns 53,000 hectares of land in 23 counties, including Prince Charles’s Gloucestershire home of Highgrove. It has provided incomes to successive Princes of Wales since the 14th century. The assertion that the estate is inseparable from Charles has allowed him to use its gross profits to fund private and official spending including 26 valets, gardeners and farm staff. In the past five years he has received more than £86m from the arrangement.

But when Angel was tasked with deciding if the duchy should publish information about its environmental impact, he ruled it must be considered a separate legal body to the prince because of “the differentiation of the duchy and duke in commercial and tax matters as well as under legislation and the contractual behaviour of the duchy”.

The judge said: “We find that the duchy is now a body or other legal person.”

Independent accountants and a firm of tax lawyers consulted by the Guardian over the claims confirmed the ruling had the potential to undermine the prince’s tax arrangements, but said it was not clear-cut.

“There appears to be no legal basis on which the duchy is not taxed and there is no legal basis for the arrangement under which Prince Charles pays tax on an ad hoc basis of his own making,” said Richard Murphy, who runs Tax Research LLP, and has examined the duchy’s arrangements. “We have a token PR gesture from Prince Charles, not unlike Starbucks’ arrangement [to pay voluntary corporation tax].”

London tax law specialist, Robert Newey, said the court ruling is “persuasive, but not binding on other courts”.

“It is certainly interesting that the tribunal concluded that the duchy of Cornwall was a body for purposes of the environmental information regulations,” he said. “Corporation tax applies to ‘companies’, but for this purpose the term ‘company’ has a very wide meaning. It includes any body corporate or unincorporated association.”

Clarence House strongly denies any tax avoidance and said that because Charles pays income tax on money received from the duchy, “it would therefore not only be legally wrong to introduce corporation tax, but it would also result in double taxation”. It said the management of the duchy is subject to supervision by the Treasury.

“His taxes are checked by the Inland Revenue, like anyone else, which reviews all his business deductions,” said a spokeswoman. “In 2011-2012, the Prince of Wales paid the full amount in tax, which was almost £5m during this period.”

Graham Smith, director of Republic, said: “For Charles, the duchy operates as his own personal tax haven, depriving the public coffers of millions of pounds – money that could be spent on public services.

“At a time when the country is under unprecedented economic stress it is unacceptable that the heir to the throne is avoiding his tax obligations in this way.”

The renewed scrutiny of Charles’s tax affairs has thrown up other possible anomalies in his arrangements. The prince’s spokesman, asked about the effect of the judge’s ruling, gave a different reason to the duchy for the estate not paying corporation tax.

“Only companies pay corporation tax,” the palace said. “The duchy is not a company, it is a trust which was set up to generate income for Princes of Wales.”

This argument presents three problems for Charles, Murphy said. It is not true that only companies pay corporation tax – HMRC’s tax rules say “unincorporated associations” and “groups of individuals carrying on a business that is not a partnership” are among the categories of organisations that must pay the tax.

Also, he said, if the duchy is a trust then it should be liable for capital gains tax, which it does not pay, saying it is not liable. Finally, the beneficiary of a trust, in this case Charles, is deemed to be the owner of the assets for inheritance tax purposes which means that when Charles dies, HMRC should levy inheritance tax on the assets before they go to Prince William.

Inheritance tax – which at the current rate of 40% would be a bill of £280m – has not been levied on the duchy.

A spokesman for Charles said: “The capital assets of the duchy do not vest in the duke and pass from one duke to another in perpetuity. The Prince of Wales has no entitlement to the duchy’s assets.”

In 1992, the Queen volunteered to pay income and capital gains tax in a deal that exempted her from paying inheritance tax of up to £20m on the Queen Mother’s will. Her main tax liability comes from her investment portfolio, which includes the Balmoral and Sandringham Estates, the value of which has never been disclosed. Her expenditure on official engagements is deductible from taxable income, but her dresses are not because they are likely to serve “a personal purpose which makes it disallowable”.

Prince Charles receives state grants to help pay for his official duties, but for the bulk of his costs he draws income from the Duchy of Cornwall which is taxed at normal rates after deductions for expenses. He paid almost £5m in the tax last year on an income of just over £18m. Clarence House said this was almost all at the top rate of 50% after deductions. His return is audited by inspectors from the HMRC. The taxpayer covers council tax for Royal properties that are vacant or used as staff accommodation. In 2009 it was estimated the queen paid just £1,375 in rates for Buckingham Palace because of Westminster’s low tax bands. Other than the Queen and Prince Charles, the royal family pays tax in the ordinary way.