Researchers have discovered that there’s enough power in living trees to run an electric circuit. 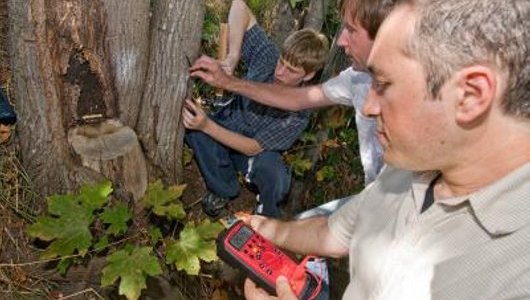 TREE POWER: Engineers Babak Parviz and Brian Otis demonstrate with students how a device can be plugged into a tree for power. (Photo: University of Washington)

In today’s world of high-tech portable gadgets, iPods and cell phones, we’ve become dependent upon readily accessible electric outlets to power our devices and charge our batteries. But now researchers at the University of Washington have discovered nature’s alternative to the power outlet: living trees.

That’s right, living trees. UW engineers Babak Parviz and Brian Otis have invented an electrical device that can be plugged directly into any tree for power. “As far as we know this is the first peer-reviewed paper of someone powering something entirely by sticking electrodes into a tree,” said Parviz.

The research was based upon a breakthrough study last year out of MIT, when scientists found that plants generate a voltage of up to 200 millivolts when one electrode is placed in a plant and the other in the surrounding soil. Those researchers are already designing devices which act as forest sensors powered entirely by this new method. But until now, no one has applied these findings to the development of tree power.

It all began last summer with UW undergraduate student Carlton Himes (also the study’s co-author). He spent his summer wandering around the woods surrounding campus, hooking nails to bigleaf maple trees and connecting them to his voltmeter. Sure enough, the trees registered a steady voltage of up to a few hundred millivolts.

The next step for the UW team was to build a circuit to run on the available tree power. Because the voltage generated by the trees can be so small, the resulting device — a boost converter — was specialized to take input voltages of as little as 20 millivolts to be stored to produce greater output. The device’s produced output voltage ended up being 1.1 volts, which is enough to run low-power sensors.

Of course, the researchers were quick to point out that the technology is still a long way off from being able to power normal electronics. “Normal electronics are not going to run on the types of voltages and currents that we get out of a tree,” Parviz said.

At the very least, these findings open the door for new generations of electronics which might eventually be efficient enough to take advantage of tree power. It certainly excites the imagination. Maybe in time we’ll be witness to weekend picnickers lounging in local parks with their iPods and cell phones plugged into the surrounding foliage.