– Unemployment Is Not Going Down: The Employment Rate Has Been Under 59 Percent For 39 Months In A Row (Economic Collapse. Dec 9, 2012):

The mainstream media is heralding the decline of the official unemployment rate to 7.7 percent as evidence that the U.S. economy is improving.  But it is a giant lie.  The truth is that unemployment in America is not actually going down.  The percentage of working age Americans with a job actually dropped slightly in November.  During the last recession, the percentage of working age Americans with a job fell from about 63 percent to under 59 percent and it has stayed there for 39 months in a row.  In September 2009, during the depths of the last economic crisis, 58.7 percent of all working age Americans were employed.  In November 2012, 58.7 percent of all working age Americans were employed.  It is more then 3 years later, and we are in the exact same place!  So how in the world are they able to pretend that the “unemployment rate” is going down steadily?  Well, they get there by pretending that hundreds of thousands of unemployed workers “leave the labor force” each month.  According to the government, another 350,000 Americans left the labor force during November, and when you keep pretending that huge chunks of workers “disappear” each month it is easy to get the “unemployment rate” to go down.  But any idiot can see that there is something really funny about these numbers.  Barack Obama has been president for less than four years, and during that time the number of Americans “not in the labor force” has increased by nearly 8.5 million.  Something seems really “off” about that number, because during the entire decade of the 1980s the number of Americans “not in the labor force” only rose by about 2.5 million.  At this point the official unemployment rate is so manipulated that it is of very little value at all.

But the mainstream media is just eating up this “good news”.  They are very excited that the “unemployment rate” has fallen from its peak of 10.0 percent in October 2009 to 7.7 percent now… 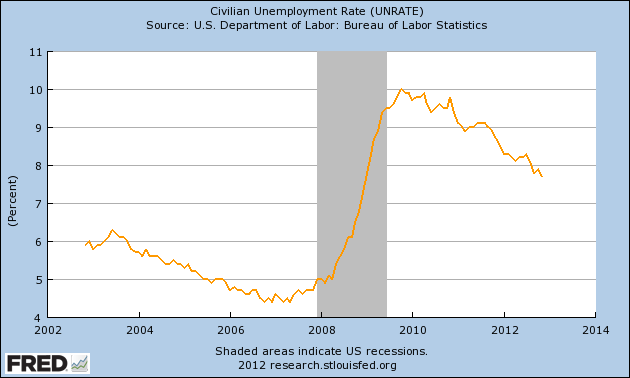 But if unemployment was actually going down, we should be seeing the percentage of Americans with a job go up.

Unfortunately, that is NOT happening.

As I mentioned above, the “employment rate” fell below 59 percent during the last economic crisis and it has stayed there for 39 consecutive months… 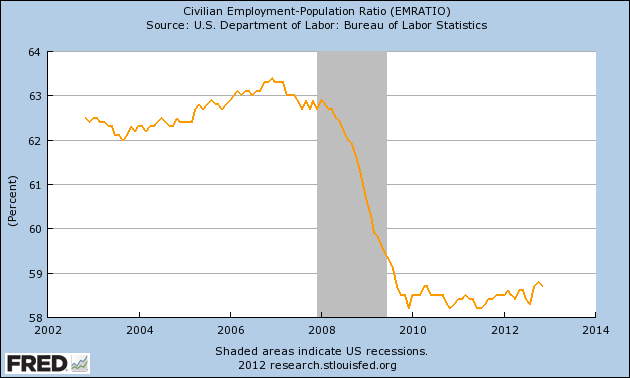 So all of that stuff about the employment situation getting better is just a load of nonsense.  The percentage of Americans with a job has stayed very, very steady since the end of 2009.  It is almost as if someone has hit a “pause button” and won’t let unemployment get better or get worse.

This is the first time since the end of World War II that we have not seen the employment-population ratio bounce back in a significant way after a recession has ended.

So it turns out that the glowing employment reports from those months that helped get Obama re-elected were really not that great after all.

The truth is that it takes somewhere between 100,000 and 150,000 new jobs a month just to keep up with the growth of the population.  So at best we are treading water.

And who is “creating” those new jobs?

According to an analysis performed by CNSNews.com, 73 percent of the jobs “created” over the past 5 months have been “created” by government.

But government does not create real wealth.

Real wealth is only created by the private sector.

It would be very nice if I could report a major employment turnaround, but it simply is not happening.

Instead, we continue to see an increase in the number of Americans living in poverty.

If things are getting better, then why are organizations like the Salvation Army seeing record numbers of families coming to them for help this holiday season?

For much more on the continued growth of poverty in the United States, just see this article.

Sadly, an increasing number of Americans find themselves forced to turn to the government for assistance, and the cost of caring for all of them has become extremely expensive…

But if you think that things are bad now, you should brace yourself, because things are going to get even worse.

For example, how much worse will things get if a fiscal cliff deal is not reached and millions more Americans find themselves in desperate need of help?  According to ABC News, more than 3 million Americans will lose unemployment benefits by the beginning of April if Congress does not do something…

2013 is already shaping up to be a very tough year.

But the mainstream media is not really talking about how the middle class is systematically being destroyed or about how our once great manufacturing cities are being turned into desolate wastelands.

They just want us all to be happy, but the cold, hard reality of the matter is that the U.S. economy no longer produces enough jobs for everybody and it never will again.

Both of our major political parties have fully embraced the emerging one world economic system which puts average American workers into direct competition for jobs with workers in third world countries where it is legal to pay slave labor wages.

Millions of good paying American jobs have been shipped to countries where workers work very long hours in absolutely horrific conditions for as little as 45 dollars a month.

Are you willing to work for 45 dollars a month?

Meanwhile, Americans that still do have jobs are piling up more debt than ever before.  It appears that most people have not learned any lessons from the last major economic crisis.  It has just been reported that consumer borrowing in the United States has hit a new record high…

The Federal Reserve said Friday that consumers increased their borrowing by $14.2 billion in October from September. Total borrowing rose to a record $2.75 trillion.

And of course the biggest offender of all is our federal government.  They just keep borrowing money as if there was no tomorrow.

During the first two months of fiscal year 2013, the U.S. government has run a deficit of $292 billion dollars ($57 billion worse than last year) and during that time it has borrowed an average of $4.8 billion dollars a day.

30 years ago, the U.S. national debt was about 1.1 trillion dollars.

Now it is more than 16.3 trillion dollars.

To get an idea how much money 16 trillion dollars is, just watch this 2 minute video.

How could we be so stupid?

Yes, much of America is still experiencing “prosperity” right now.  But it is a prosperity that has been fueled by the greatest debt bubble that the world has ever seen.

When that debt bubble bursts the pain is going to be unbelievable.

If you actually believe that America is going to prosper in the years to come, you are just fooling yourself.

Our economy is declining and has been declining for quite some time.  If you doubt this, just read this: “34 Signs That America Is In Decline“.

So that is the bad news.

But the good news is that even though the entire nation is not going to prosper, there will be those that will have prepared and that will have gotten themselves into position to take advantage of what is coming.  During the coming crisis a massive amount of money and wealth will change hands.  Instead of living in fear and cowering under a blanket, now is the time to figure out how you and your family can thrive during the hard times that are on the horizon.

During the economic crisis of 2008 and 2009, there were some people that actually did amazingly well.  So don’t lose hope just because the U.S. economy is headed for disaster.

Everything that can be shaken will be shaken.  But if you understand what is happening and you prepare for it, the times that are coming can actually be a great adventure and a great blessing for you and your family.

But if you just stick your head in the sand and have blind faith in the system and pretend that everything is going to be okay somehow, then you will be blindsided by the coming crisis and you will only have yourself to blame.