Update: The devolution is complete as Egypt declares martial law.* * *

It was only a matter of time before Egypt’s US-endorsed temporary dictator resolved to what will be spun as temporary military intervention against what is increasingly looking like a permanent counterrevolution by deploying the army to crush local protesters who have besieged the Egyptian presidential palace for almost a week, and have put the country’s new “democratic” regime increasingly under threat of collapse.

RT reports that “Egyptian President Mohamed Morsi will authorize the deployment of the country’s armed forces to quash protests in Cairo, al-Ahram reported. The military said prolonging the crisis would be “disastrous,” and that they would not tolerate violence. At least six people died and hundreds were reported injured over the last few days in the unrest that has gripped the Egyptian capital since late November. Al-Ahram reported that the armed forces will be given powers of arrest, previously an exclusive right of the police.”

Naturally, once one starts down the slope of “temporary decrees” (never to be confused with presidential Executive Orders), one doesn’t go back. The only question is whether the denouement of the Mursi administration will be a peaceful one with the self-imposed dictator stepping down without a fight, or if the country will devolve into an all out civil war, threatening the (in)stability of the region even further. 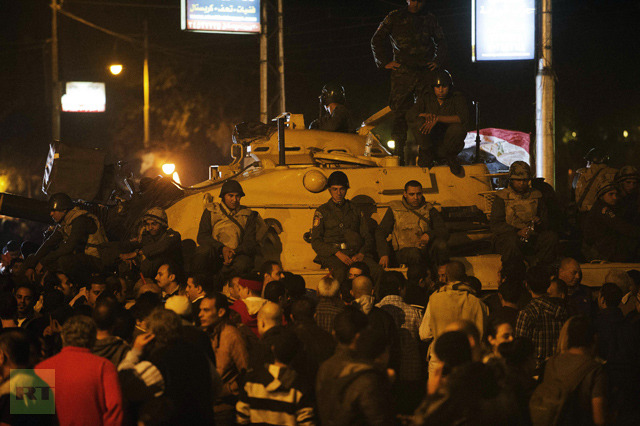 On Saturday, the military urged political forces to solve their dispute via dialogue saying it would take the country into a “dark tunnel,” hinting military intervention.

“Anything other than that [dialogue] will force us into a dark tunnel with disastrous consequences; something which we won’t allow,” according to a military statement read out on state TV.

Failing to reach a consensus, “is in the interest of neither side. The nation as a whole will pay the price,” the statement added.

The military stressed that dialogue is the “best and only” way to take Egypt out of its crisis adopted by the Muslim brotherhood. The country previously watched as the military had control over previous presidents particularly after Mubarak’s fall.

However, Mursi pushed the general’s aside in August and they had shown little appetite to intervene in Egypt’s latest crisis.

The army started to assert itself again, sealing off the presidential palace with tanks and barbed wire, saying it “realizes its national responsibility in protecting the nation’s higher interests,” and state institutions.

The state-run daily al-Ahram reported that Mursi would soon authorize the military to help police keep order and give it powers of arrest under a decree approved by the cabinet. It did not say when the decree would be issued.

On the other hand, a far greater problem would evolve if instead of a simple escalation, the conflict grew into a schism along religion lines:

The Muslim Brotherhood’s supreme guide, Mohamed Badie, denounced opposition protests that have swirled around the walls of the Mursi’s palace, saying they “ruin legitimacy.”

Badie said eight people, all of them Brotherhood members, had been killed this week and urged the interior minister to explain why police had failed to prevent assailants from torching the organization’s headquarters and 28 other offices.

“Get angry with the Brotherhood and hate us as much as you like, but be reasonable and preserve Egypt’s unity,” he told a news conference. “We hope everyone gets back to dialogue.”

The turmoil has exposed deep divisions over the destiny of a country of 83 million where the removal of Mubarak 22 months ago led to a messy army-led transition, with the Brotherhood and its allies winning two elections.

The well-organized Brotherhood, which pushed Mursi from obscurity to power, remains his surest source of support, with over 80 years of religious and political struggle behind it.

Late on Friday, Prime Minister Hisham Kandil urged political forces to take “courageous and constructive steps” by calling off protests and joining the dialogue without preconditions.

This is the same Egypt about which US State Department secretary Burns issued the following statement as recently as July:

First, let me take this opportunity to congratulate the people of Egypt on what is truly an historic set of achievements. A peaceful revolution. Competitive elections. The first democratically elected civilian president in Egypt’s history. For all the very real problems that remain, not all nations who rose up alongside you last year have been so fortunate. Not all nations carry Egypt’s strategic and historic weight. And not all nations can have such an important impact on the entire region through the success of their democratic transition, and through their continued role as a strong pillar of peace, security, and prosperity.

Second, the United States will do all we can to help ensure a successful transition in Egypt, which offers the best path to realize the aspirations of the Egyptian people for dignity, for opportunity, for security, and for a voice in their own affairs. Egyptians know far better than we do that their aspirations are not yet fully realized, but they can count on America’s partnership on the complicated road ahead.

Third, we are mindful that many of the Egyptian people’s most pressing concerns today are economic in nature. We are fully committed to tangible initiatives to help Egypt deal with its economic challenges, including meeting immediate financial concerns, providing debt relief, helping to create jobs and educational opportunities, and encouraging U.S. investment and tourism. For all the obvious challenges, Egypt clearly has the potential for economic revival and inclusive growth.

Fourth, in a very short time, Egypt has traveled a remarkable distance, but a great deal of work remains to build the strong, durable democratic system for which the Egyptian people launched their revolution. It will be critical to see a democratically elected parliament in place, and an inclusive process to draft a new constitution that upholds universal rights. The challenge remains of building institutions which will ensure that no matter who wins an election in any particular year, the rights of all Egyptians will always be protected. This challenge belongs not just to Egypt’s leaders but to its citizens as well.

Finally, tens of millions of Egyptians will be looking to President Morsi and the Cabinet he forms to take needed steps to advance national unity and build an inclusive government that embraces all of Egypt’s faiths and respects the rights of women and secular members of society. So will the international community. We are fully committed to working with Egypt’s President, its new government and all parties to sustain our partnership and advance our shared interest in a strong, democratic, and economically vibrant Egypt that is a force for peace and stability in the region.

And while the local situation in the country which the US called a “pillar of peace, security and prosperity” to get much bloodier, violent and overall louder, one person who has kept very quiet during the past few weeks is none other than Hillary Clinton, who as recently as July welcomed Morsi with open arms. 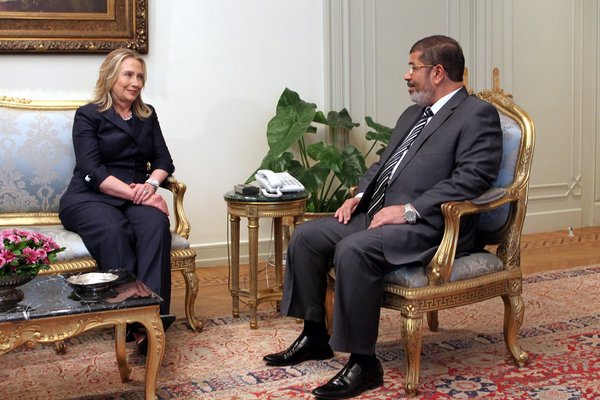 Secretary of State Hillary Rodham Clinton arrived in Egypt on Saturday for meetings with its newly elected Islamist president and the chief of its still-dominant military council, declaring that the United States “supports the full transition to civilian rule with all that entails.”

But after weeks of internal debate across the Obama administration over how to respond to the ongoing struggle between the president and the generals, Mrs. Clinton touched on it only lightly, saying she looked forward to working “to support the military’s return to a purely national security role.”

State Department officials said the meeting itself sent a historic message. Seated in an ornate room in the presidential palace, Mrs. Clinton smiled for cameras and traded pleasantries with President Mohamed Morsi of the Muslim Brotherhood, an Islamist jailed more than once by the American-backed autocracy overthrown 18 months ago. She became the highest ranking United States official to meet Mr. Morsi since he was sworn in two weeks ago as Egypt’s first democratically elected president.

This is the same Hillary Clinton who “was targeted by protesters who threw tomatoes and their own shoes at her motorcade during a visit to Egypt on Sunday. Demonstrators also mockingly chanted ‘Monica, Monica’ in reference to Bill Clinton’s extra-marital affair. The Secretary of State was on her first trip to Egypt since the election of the country’s new Islamist President, Mohammed Morsi.”

Mursi is thus on the way to becoming the second US-supported dictator in Egypt. The irony of course is that like the Fed’s market interventions, the half-life of the US state department imposing its pawns in various countries, only to see them turn against the US. can now be measured in months.

The only question remaining is with the CIA and the US having no natural allies left in the country that controls the Suez Canal should Morsi be thrown out one way or another, how will America continue to impose its control in this country which is becoming ever more critical at a time when the gateway to Africa is one of the most important geopolitical tension points, not to mention a key focal point in the simmering Iran-Israel conflict?