Below is a list of the 4 largest Federal Reserve asset category by notional as of today:

Quietly, the Fed’s Other Assets have overtaken Agencies, and are now the Fed’s third largest asset category and about four times the total Fed capital of $55 billion. We have written about these “other assets” in the past; we will likely write about them in the future again, for the simple reason that the chart showing the Fed’s notional holdings in this category correlates quite clearly with the parabolic Greek unemployment rate. 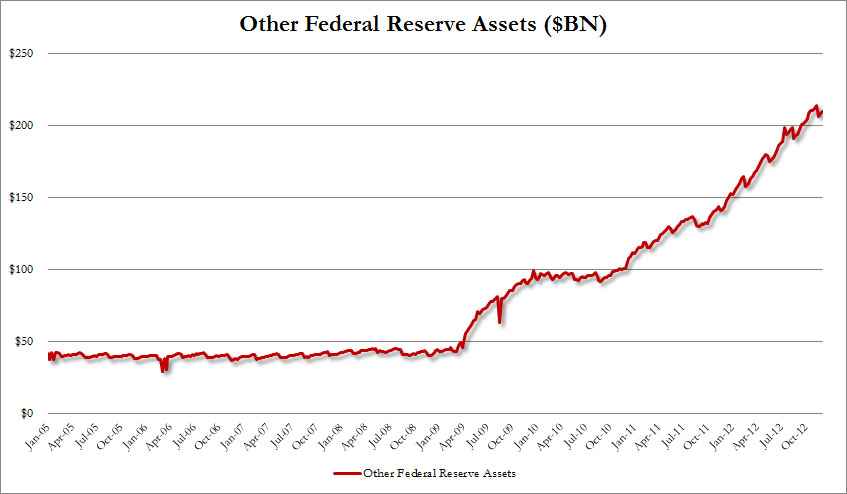 Finally, here is the semi-circular definition of Other Assets provided by the H.4.1:

Includes other assets denominated in foreign currencies, which are revalued daily at market exchange rates, and the fair value adjustment to credit extended by the FRBNY to eligible borrowers through the Term Asset-Backed Securities Loan Facility.

Who knew that in addition to being a master of borderline Congressional perjury, the Fed was so adept at tautology: other assets are, well, other assets.

But at least we know something about the subset of the set that contains the set as a subset of itself (Bertrand Russell’s head just exploded): it contains “other assets denominated in foreign currencies.”

Foreign currencies: this means foreign assets. Which perhaps answers a long-running question. Recall that in March we revealed that, based on the Fed’s own admission, it was monetizing not only US debt, but foreign debt as well (much like what the BOJ is hoping to do as well in its imminent “forceful” easing).

Yup. In the Chairman’s own words:

Central banks typically hold a variety of assets, and the composition of assets on the cen- tral bank’s balance sheet offers another potential lever for monetary policy. For example, the Federal Reserve participates in all segments of the Treasury market, with most of its current asset holdings of about $650 billion distributed among Treasury securities with ma- turities ranging from four weeks to 30 years. As an important participant in the Treasury market, the Federal Reserve might be able to influence term premiums, and thus overall yields, by shifting the composition of its holdings, say, from shorter- to longer-dated securities. In simple terms, if the liquidity or risk characteristics of securities differ, so that investors do not treat all securities as perfect substitutes, then changes in relative demands by a large purchaser have the potential to alter relative security prices. The same logic might lead the central bank to consider purchasing assets other than government securities, such as corporate bonds or stocks or foreign government bonds. (The Federal Reserve is currently authorized to purchase some foreign government bonds but not most private-sector assets, such as corporate bonds or stocks.)

One thing, however, that was unclear is where on its balance sheet the Fed was lumping these “overseas sovereign debt” purchases.

Now we know. And more importantly we know the maximum possible size (until such time as the Fed provides an actual break down of precisely what is in “other assets”) of said foreign bond holdings: $209 billion and rising parabolically.

Perhaps, with Europe supposedly “stable” due to the recent stability of its sovereign bond markets, it is time to ask the Chairman just how responsible the Fed has been in the past several months for said stability, courtesy of expanding its own balance sheet, since the ECB continues to play coy with the Spanish PM, but where the completely unused OMT is supposed to provide some mystical backstop to everything.

Or, to cut to the chase, how many tens of billions of Spanish, Italian, French, Japanese and other sovereign bonds does the Fed currently hold?