There was a time when Swiss bank secrecy was the passion of every tax-challenged oligarch in the world. Then things changed, Obama made it s badge of honor to rat out anyone you know who has a bank account in Zurich or Geneva, lists of previously ultra-secret account holders started “leaking” and from an asset, Swiss bank accounts promptly became a liability to everyone involved. Such as the matriarch of the legendary Papandreou family, former Pasok Greek PM G-Pap’s mother, Margaret, also wife of former PM Andreas, who according to The Telegraph has been revealed as having a €550 million ($700 million) Swiss bank account (she will hardly be happy to learn that Credit Suisse just instituted a negative interest on CHF deposits) in the Geneva branch of HSBC. Obviously lots of hard work by M-Pap went into building up that particular nest egg. 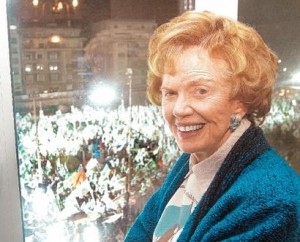 M-Pap has quite an soap opera past of her own:

Margaret Papandreou was born Margaret Chant, in the US, in 1923 and grew up in Elmhurst Illinois. She met the future Prime Minister in 1948 at the University of Minnesota where he was a professor and she was a 25-year old journalism student. A relationship developed between the two despite the fact that Papandreou was still married to his first wife. Eventually, Margaret also married someone else. That marriage ended in divorce as did Papandreou’s first marriage and the two of them were married to each other in 1951. The marriage produced four children.

In 1967 a military Junta overthrew the democratic government of Greece and established a dictatorship. Andreas and Margaret Papandreou were exiled first to Sweden, then to Canada where they stayed until the restoration of democracy in 1974. At that time, Andreas Papandreou returned to Greece to form his own political party – PASOK – breaking with his late father’s former political allies. In 1981, he was elected Prime Minister and Margaret became the first lady of Greece. In that capacity she sought to reform much of the social and political life of the average Greek woman which brought her praise from some quarters and stinging criticism from others.

Margaret Papandreou’s days as the first lady of Greece came to an abrupt halt when her husband met Olympic Airlines stewardess, Dimitra Liani in 1989. The aged PM divorced Margaret to make the young stewardess his third wife.

Sarcasm aside, it is apparent first it was years of looting governing by husband Andreas, followed by years of looting governing by son George, that is among the chief reasons why Greece is now in an economic and monetary singularity, with the unemployment rate rising by 1% per month. But at least once the time to follow through on that self-imposed exile by G-Pap and family, he will not be at a loss how to fund his remaining days. What will also not be lost is the irony that after taking power in 2009, his government announced that the country’s financial situation was far more dire than originally thought, largely due to tax evasion by Greek citizens. Such as himself it appears. What is the message here is what we have been saying for years: it is not austerity that is the primary cause of misery for the Greeks, although Greek politicians sure enjoy laying the blame for everything on belt-tightening. It is the outright theft and plunder by those who are supposed to be in charge of fixing Greece that is the reason why now Greece, and soon everyone else, has become such an economic basket case.

Margaret Papandreou, whose son George served as the country’s prime minister during the height of the Eurozone crisis, is said to be on the “Lagarde list” of Greek citizens with fortunes hidden in Switzerland.

“Why such lies? Why such attacks? Perhaps because my family never served this country’s interest groups,” she said in a statement.

No: they merely served their own selfish interests, at the expense of the general Greek population.

Mr Papandreou, who stood down as prime minister in 2011 but remains a member of parliament, said the stories were “rumours without facts” and were part of a backlash against his anti-corruption battles while in office.

After taking power in 2009, his government announced that the country’s financial situation was far more dire than originally thought, largely due to tax evasion by Greek citizens.

Mrs Papandreou’s name reportedly surfaced in a report made by police to members of parliament last month.

The “Lagarde list” was provided to Greece by the French government while Mrs Lagarde was still finance minister in Nicolas Sarkozy’s government.

Not even the Onion could make up the utterly bizarre tragicomedy that the sinking European continent has become. Sadly, this is merely a blueprint for what is coming everywhere else to the ‘developed’ (and developing) world.