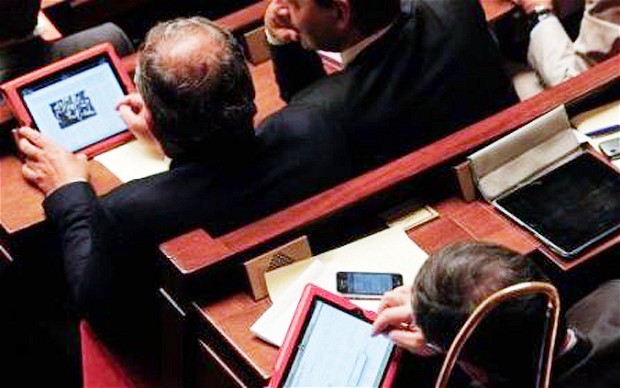 French MPs use their iPads and tablets

– French MPs caught out playing online poker on their tablets to stave off boredom during debates (Telegraph, Nov 23, 2012):

French MPs have been caught playing online poker and chess and buying wine and clothes on their electronic tablets in the National Assembly, sparking calls for the new Socialist speaker to scramble wireless signals in the chamber for the sake of democracy.

In the past, French “députés”, its members of parliament, would discreetly stuff a newspaper in a serious political document to stave off boredom during tedious debates.

Now they brazenly get out their ipads and other electronic-tablet devices with the screens dotted around the chamber. While using such devices to keep up with new legislation may sound acceptable, it transpires many French MPs use their free access to parliamentary wireless internet to connect to sites with no link to lawmaking.

Others have been caught flouting a photography ban in the hemicycle to take snaps of debates with their tablets “like vulgar tourists”.

Matthieu Hanotin, Socialist deputy for the Paris suburb of Seine-Saint-Denis admitted to having been “nabbed” playing online chess during a particularly interminable nighttime debate.

Danièle Hoffmann, Socialist MP for Paris admitted to reading the papers via her tablet. “It’s very practical. We’re totally up to date and will soon receive amendments directly online, which will be progress,” she told Le Parisien.

Such distractions are apparently tolerated by Claude Bartolone, the Assembly’s new Socialist speaker, who has declined to use the scrambling device installed by one of his conservative predecessors, Jean-Louis Debré.

“One doesn’t elect representatives of the people for them to turn up and play cards. In that case, I’d frankly rather they didn’t show up at all.

It’s execrable for democracy,” he said. “When debating a bill, an MP must be alone with his conscience and his ideas.” He said he was “all for mobiles and computers anywhere else in parliament” and dismissed claims that it would be unfeasible to scramble only the debating chamber.

“If we can put a man on the moon, we have the expertise to do this,” he said.

In Britain, parliament last year resolved that “hand-held devices (not laptops) may be used in the Chamber, provided that they are silent, and used in a way that does not impair decorum”.

One of the more controversial arguments for the lifting of the restriction on using hand-held devices in the UK was that “Members might be more willing to spend time in the Chamber listening to debates” if allowed to multi-task with handheld devices.