The gun shop owner should have included Romney voters, since both Obama and Romney are elite puppets serving the same elite masters.

A gun store owner in Arizona has banned people who voted for President Obama from entering his store, even though Democratic voters were a small minority in his town.

Cope Reynolds, owner of the Southwest Shooting Authority in Pinetop-Lakeside, Arizona, published an advertisement in a local newspaper, prohibiting Obama supporters from visiting his business.

“If you voted for Barack Obama, your business is NOT WELCOME at Southwest Shooting Authority. You have proven you are not responsible enough to own a firearm,” reads the ad, which cost the man about $250 to run in the White Mountain Independent newspaper. 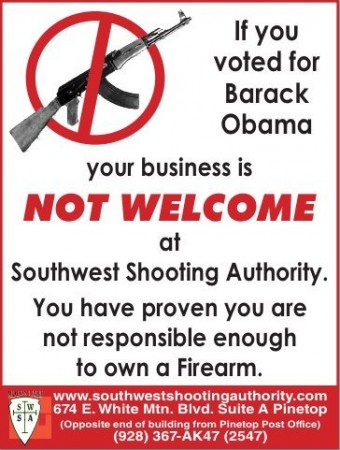 Pinetop-Lakeside has a population of 4,280, only 736 of whom voted for Obama. Even though this is a small minority, Reynolds is still outraged by their political choice. He is particularly opposed to Democratic views on entitlements. He also fears that Obama would restrict gun rights.

“It is about the direction this country is going and the direction it’s been going for the last four years, and I feel like the people who voted for him are by and large the ones that are on the many entitlements and free stuff that they’ve been getting,” Reynolds said in an interview with Huffington Post.

Although Obama has not enacted any serious gun regulations since he became president, his mention of a possible ban on assault weapons during the second presidential debate sparked concern among gun owners. Reynolds believes the president was waiting to impose tighter regulations once he had the security of re-election.

“There are a lot of people who feel like he’s going to take the guns away and rightly so,” Reynolds said. “I think that he will. I think that our rights will be infringed in a big way and very soon.”

But there’s one major problem with Reynolds’ new policy: it can be impossible to tell how someone voted just by looking at them, and it’s easy for Obama voters to lie. Asked by the Phoenix New Times how he weeded out Obama voters, Reynolds said he was just trying to make a statement.

“Obviously, this is nothing more than a political statement,” he wrote in an e-mailed statement. “Of course, it would be impossible to enforce. If they don’t say anything, we’ll never know. They could purchase whatever they wanted, and they would probably get a big kick out of thinking they are rubbing it in our face as they walk out the door.”

But those who own up to voting for Obama will not be served at the store.