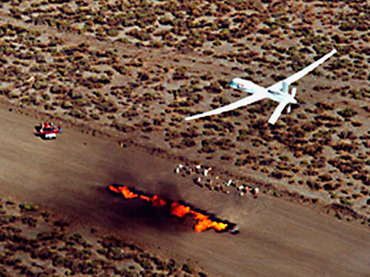 US-led drone strikes — the targeted executions of suspected insurgents using remote-controlled, killing machines from tens of thousands of feet above the Earth — are not about to end.

Unmanned aerial vehicles like the widely popular Predator drone will not be put into retirement by the Pentagon, even 11 years into a so-called global war on terror and the take-down of Osama bin Laden, inarguably America’s biggest adversary. According to a chilling report published Tuesday evening in the Washington Post, in fact, the most advanced tactics to decimate alleged enemies without ever bringing them to trial are not being eliminated, but updated.

Soon the days of a secret Oval Office-penned roster of persons slated for extrajudicial execution will be in the past. The Post reports that for the last two years, the Obama administration has tried feverishly to develop “a next-generation targeting list” that will serve as an updated version of the already-in-place death panel of persons authorized by the commander-in-chief himself to be blown to oblivion from miles above.

In this week’s article, journalist Greg Miller suggests that the White House is ready to do more than just cross suspected terrorists off their kill-list one-by-one with each subsequent UAV strike. The real-world man-hunt will soon be operated by means of a “disposition matrix,” more modernized terminology and technology that will let counterterrorism experts in Washington plot not just who and how to kill, but where to find them and what to do in order to bring them to justice.

“The matrix contains the names of terrorism suspects arrayed against an accounting of the resources being marshaled to track them down, including sealed indictments and clandestine operations,” Miller explains. “US officials said the database is designed to go beyond existing kill lists, mapping plans for the ‘disposition’ of suspects beyond the reach of American drones.”

Miller goes on to say that these claims have been confirmed by dozens of current and former national security officials, intelligence analysts and others, and all but explains exactly the algorithms developed and the answers required to warrant a full-fledged manhunt and execution for any alleged enemy of the state. The disposition matrix, it would seem, is outlined perfectly in Miller’s report. One question, however, does remain: Why?

The Obama administration has yet to offer an in-depth answer as to why targeting killings are even an option, except for a single speech delivered earlier this year by Attorney General Eric Holder. Speaking before an audience at Chicago’s Northwestern University School of Law, Mr. Holder defended the executions by dismissing allegations they were prohibited, instead saying, “the US government’s use of lethal force in self-defense against a leader of al-Qaeda or an associated force who presents an imminent threat of violent attack would not be unlawful — and therefore would not violate the Executive Order banning assassination or criminal statutes.”

Mr. Holder would go on to say, “Where national security operations are at stake, due process takes into account the realities of combat,” and all but affirmed that the execution of the 16-year-old American-born son of suspected terrorist Anwar al-Awlaki was authorized by the laws of war. But even after drone strikes have accumulated a death toll as high as 3,000 by some estimates — and civilian casualties certain to exceed the only acceptable answer: zero — the White House will not relax their killings but only set up a more structured blueprint for future administration to follow through with.

“We can’t possibly kill everyone who wants to harm us,” one senior administration official explains to Mr. Miller.

Instead, the White House is willing to forfeit a speedy and extrajudicial execution and will soon be seemingly more inclined to option a whole other set of rules to govern how America handles any persons of particularly morbid interest.

“The problem with the drone is it’s like your lawn mower,” Bruce Riedel, a former CIA analyst and Obama counterterrorism adviser, tells Miller. “You’ve got to mow the lawn all the time. The minute you stop mowing, the grass is going to grow back.”

That’s precisely why the matrix is being created. One US counterterrorism official speaking on condition of anonymity tells Miller that “a disposition problem” has plagued the Obama administration because, aside from straight-up ordered executions, the options are almost nonexistent. President Obama renewed to talk show host Jon Stewart last week his promise to close the Guantanamo Bay military prison where suspected terrorists are currently shackled by the dozens, which leaves the US with little methods of dismantling terror cells without a simple search and destroy mechanism.

By using the matrix, the White House implies that they are willing to work through other means to take down terror suspects. But don’t worry — the drones aren’t going anywhere. Heavens, no.

“The database is meant to map out contingencies, creating an operational menu that spells out each agency’s role in case a suspect surfaces in an unexpected spot,” Miller writes. One former counterterrorism official involved in the architecture of the matrix tells the Post that the program will ideally be executed in cases where foreign targets are spotted overseas but an Obama-ordered UAV strike isn’t necessarily the best option.

“If traveling overseas to al-Shabaab [in Somalia] we can pick him up by ship,” the source says. “If in Yemen, kill or have the Yemenis pick him up.”

In recent years, the White House has ramped-up its counterterror tactics by expanding launching pads for drones around the world. Currently the stealth airships can be dispatched in moments across the Middle East, Arabian Peninsula or Northern Africa, and domestically they are expected to be cleared by the Federal Aviation Administration within a year. Even still, though, the expert involved in the matrix says the long-arm of extrajudicial murder still has its obstacles that even America’s World Police aren’t willing to work around in some situations.

“How do we deal with these guys in transit? You weren’t going to fire a drone if they were moving through Turkey or Iran,” the counterterrorism expert asks. But while that’s indeed a claim that’s hard to dispute, that doesn’t mean the White House has decided to censor itself when it comes to cutting back on killings.

“We didn’t want to get into the business of limitless lists,” another former senior US counterterrorism official tells the Post. “There is this apparatus created to deal with counterterrorism. It’s still useful. The question is: When will it stop being useful? I don’t know.”

During the first and only televised debate between the candidates vying for vice president during next month’s election, incumbent VP Joe Biden said America’s goals regarding Afghanistan have been already accomplished and an exit is imminent.

“The fact is we went there for one reason: to get those people who killed Americans: al-Qaeda,” Mr. Biden said. “We’ve decimated al-Qaeda central. We have eliminated Osama bin Laden. That was our purpose. And in fact, in the meantime, what we said we would do, we would help train the Afghan military. It’s their responsibility to take over their own security. That’s why, with 49 of our allies in Afghanistan, we’ve agreed on a gradual drawdown so we’re out of there . . . in the year 2014.”

Meanwhile, though, the State Department has been reportedly orchestrating talks overseas that will allow US forces working alongside coalition partners with NATO to stay in Afghanistan indefinitely, a move that would presumably mean more than just leaving boots on the ground but offer only more opportunities to analyze and execute persons deemed fit for the disposition matrix.

When Pres. Obama and GOP challenger Mitt Romney squared off during the third and final televised debate this week, the current commander-in-chief answered a question about foreign UAV strikes without ever once whispering the dreaded “d-word.”

The president opined quite the opposite of what his running mate said days earlier, telling Gov. Romney, “Keep in mind our strategy wasn’t just going after bin Laden. We created partnerships throughout the region to deal with extremism in Somalia, in Yemen, in Pakistan.”

“But we’re always also going to have to maintain vigilance when it comes to terrorist activities,” Pres. Obama continued. “The truth, though, is that al-Qaeda is much weaker than it was when I came into office. And they don’t have the same capacities to attack the U.S. homeland and our allies as they did four years ago.”

And perhaps that insurgency has indeed been decimated as both the commander-in-chief and Vice President Biden suggested. In Mr. Miller’s report, however, he acknowledges that the “metastasizing” of the organization has left America not just concentrating their efforts in Afghanistan, but instead broadening up their front to find terrorists anywhere on Earth. Now as America continues its war on terror but without the geographical restrictions of when President George W Bush first ordered troops into Afghanistan, the expansion of Mr. Obama’s kill list into a lavishly worded “disposition matrix” suggests that suspects will continue to be combed for anywhere on Earth.

And with a war in Iran seeming the next logical step to ensure what we’re told is peace in the Middle East, the matrix might soon be muddled with more than just the names of al-Qaeda insurgents.

“We’re going to bomb the citizens of Iran?” Libertarian presidential candidate Gary Johnson asked during a debate of third-party nominees this week. “We’re going to find ourselves with another 100 million enemies.”

Maybe so. But according to Mr. Miller, though, we’ll at least have a way to take them down. What will happen, however, when the number of friendly cooperation partners starts to dwindle and few parties are left willing to scoop up insurgents from the seas outside of Yemen and Somalia and strike them down in the name of America? That’s a factor that we can only hope is equated into the disposition matrix and whatever mathematical algorithm that Mr. Obama and future presidents will use to put enemies on ice.