So are Germany’s gold reserves still there?

And are those gold bars real and not fake?:

– Ron Paul Calls for Audit of US Gold Reserves: 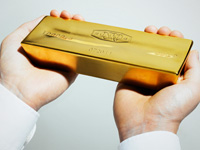 A German federal court has said that country’s central bank should conduct annual audits and physically inspect its gold reserves worldwide, including gold in the custody of the Federal Reserve Bank of New York. In addition to the FRBNY, Bundesbank gold is stored in London, Paris and Frankfurt.For decades, the Bundesbank has relied on written confirmation of its gold holdings in London, Paris and New York. According to the report from the German audit court, the last time Bundesbank officials physically inspected the central banks gold holdings was, well, never.

(It should be stated that the folks at FT Alphaville quote a report saying an inspection took place in 1979/1980.)

Interestingly enough, the Bundesbank is apparently quite happy with taking the word of other central bankers about the existence, location and size of its gold reserves. It put out the word that it disagrees with the Audit Court, which only has advisory power and cannot force the Bundesbank to follow its recommendations, about the need for inspections. Nonetheless, the Bundesbank is actually going to follow the recommendation that it verify the gold stocks. It also has plans to ship some 150 tons of gold back to Germany for a more “thorough examination.”

The Bundesbank is, of course, quite right in its opinion of the value of the examinations. In reality, it does not matter one bit whether the Federal Reserve Bank of New York actually has the German central bank’s gold or whether the gold is pure. As long as the Fed says it is there, it is as good as there for all practical purposes to which it might be put. It can be sold, leased out, used as collateral, employed to extinguish liabilities and counted as bank capital just the same whether it exists or not.

The actual presence of the gold wouldn’t make a lick of difference unless, say, Germany’s central bank decided it wanted to start using the gold for some practical, non-monetary purpose like making watches.

But there’s long been a paranoia about central bank and government gold reserves.

The gold of the United States government, which officials say is held in the United States Bullion Depository in Fort Knox, has been rumored—probably since the Depository’s founding in 1937—to have been looted and replaced with gold-painted tungsten, for instance. The government treats this as nonsense—which it most likely is—but nonetheless it does conduct regularly scheduled audits of the gold in Fort Knox, including doing purity tests on a small sample of the gold.

This paranoia is not entirely irrational, for one reason. As I mentioned above, for almost all imaginable operational purposes, the actual existence of the gold in Fort Knox or in the vault beneath the FRBNY’s Liberty Street headquarters is irrelevant. The bookkeeping is what really matters here. So long as the Fed says Bundesbank owns X tons of gold, the Bundesbank can act as if it did own the gold—even if the gold had somehow been swallowed into a gold-eating galactic worm hole. But the irrelevance of the facticity of the gold does quite easily lend itself to thinking: if the gold being there doesn’t matter, why would it be there?

I’m sure the Bundesbank officials understand this quite well, even though the German Audit Court does not. There is nothing to be gained by inspecting the gold. If it is all there and pure, there is no difference from an undiscovered absence. But if the gold isn’t there, well, calamity could follow as trust in the central bank gold depositories evaporated instantly.

In any event, it looks like Bundesbank officials will soon be visiting the Fed’s vault, which is located 80 feet below street level and 50 feet below sea level. The vault is accessible only by elevators controlled by an operator in a remote location. I’ve been told by a source that the elevator operator is actually not in New York City at all, although I can’t confirm this and the Fed won’t discuss this sort of thing.

The compartments do not have labels reading “Germany’s gold” and so on. They are instead numbered, and only a few people at the Fed know what numbers correspond to which country. The Fed says it does this to protect the privacy of the depositors. But this also makes actual inspection less reliable. There’s no way for Germany to know that the gold it is being shown is Germany’s, as opposed to some other depositor’s. In an extreme case—which I have no reason to believe is true—miscreants at the Fed could just show everyone who came to visit the same pile of gold.

This is related to another mystery about gold reserves: why do they persist?

The central banks of the world’s established economic powers do not actually do anything with their gold, apart from rare and occasional sales of gold limited by the Washington Agreement to no more than 400 tons per year.

Some central banks lend out their gold to speculators and gold miners (who borrow the gold to finance mines—basically, a risk-free hedged loan since the borrowed gold can be repaid with newly mined gold, regardless of what happens to the price of gold on the market), which can be a somewhat profitable activity—especially when the alternative is just letting it sit around doing nothing but fluctuating in value with the market price. But, as far as we know, this isn’t something the Bundesbank or the Fed does.

When Congressman Ron Paul recently asked Fed chair Ben Bernanke about the rationale for central banks holding gold, Bernanke said it was the result of “long term tradition.” But that’s not really a satisfactory answer. The lack of a satisfactory answer actually contributes to the suspicion that the gold isn’t really there at all. If there’s no purpose for it, why would it be there?

So is the German Audit Court nuts? Not necessarily. For one thing, there probably is some value to putting to rest suspicions that the public is being deceived about central bank gold reserves—although I doubt an audit will really do very much in this regard. For another, there’s always the off-chance that someone has embezzled the gold, enriching himself unjustly. Might as well check if the gold is really there.

The Fed wouldn’t comment on the record about how it will handle a German request to inspect the gold. A source says they would likely work out a deal with the Germans permitting some sort of inspection.

But I like to imagine that the Fed officials would bring the Germans to the door of the a compartment labeled, say, No. 322, and then pose the question: “Are you absolutely sure you want to see what’s in here?”

1 thought on “The Germans Are Coming For Their Gold: Federal Court Says Central Bank Should Conduct Annual Audits And Physically Inspect Its Gold Reserves”