– Former CIA Commander Says US ‘Too Slow’ To Act As Predator Drone Cam Captured Benghazi Attack: ‘They Stood, And They Watched, And Our People Died’ (New York Post)

– On The ‘Precision’ Consulate Attack: As Many As 15 Separate Teams Involved (Incl. At Least 50 Highly Trained Special Forces For The Assault) – Secure Communications Hacked With Unavailable Advanced Technology (Veterans Today) 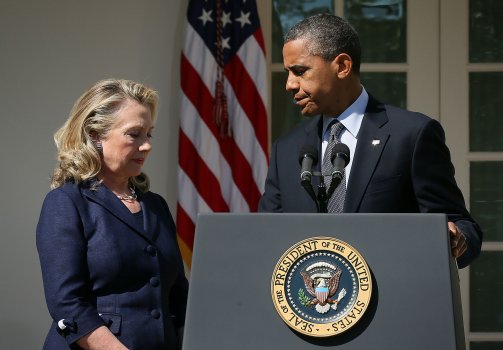 President Barack Obama (R) makes a statement in response to the attack at the U.S. Consulate in Libya as Secretary of State Hillary Clinton (L) looks on September 12, 2012 at the Rose Garden of the White House in Washington, DC. U.S. Ambassador J. Christopher Stevens and three other Americans were killed in an attack on the U.S. Consulate in Benghazi, Libya by protesters who were potentially angry over a controversial Prophet Muhammad video. (Alex Wong/Getty Images)

Last week, administration sources fed friendly journalists this line: “We weren’t wrong about Benghazi, it really was a spontaneous reaction to the video.”

This week, the administration is retreating to a new line, “OK, yes it seems we were wrong, but only because our own intelligence agencies were slow to inform us of what had happened.”

This new line may seem more defensible. But it omits a key fact: the administration was very quick to accept a version of events it found convenient (the video story) – and very slow to accept a version it found inconvenient (eastern Libya is full of seething unpoliced anti-American jihadists). That’s called cherry-picking the intelligence, and the last time it happened, the people now staffing the Obama administration thought it was a very big and bad story.

But surely not so bad a story as the claim that the Benghazi attack was a spontaneous act of terror that had nothing to do with 9/11, even though by amazing coincidence it took place on 9/11.