Just under 2.3 million U.S. homes made up a “shadow inventory” of distressed properties that are likely to hit the housing market in the future, according to Santa Ana-based data giant CoreLogic.

That’s down from July 2011, when the hidden supply of distressed homes that could become a drag on home prices totaled 2.6 million units, according to the report. 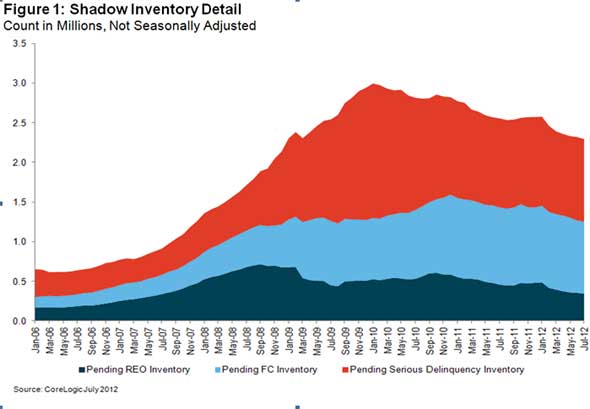 As of July, the shadow inventory consisted of 345,000 bank-owned units (dark blue), 900,000 homes in foreclosure (light blue), and 1 million homes that were 90 days or more behind on mortgage payments (red).

CoreLogic’s estimate of shadow inventory has dropped steadily since February.

Decline could be a sign that home prices will rise, the report said.

“This is yet another hopeful sign that the housing market is slowly healing,” said CoreLogic President and CEO Anand Nallathambi.

The data firm defines shadow inventory as homes where owners are 90 days or more behind on mortgage payments, homes in some stage of the foreclosure process or bank-owned foreclosures that have yet to be listed for sale.

Details from the July report show: