These are interesting times:

– European Banks Need To Sell Up $4.5 TRILLION In Assets In Next 14 Months, IMF Warns 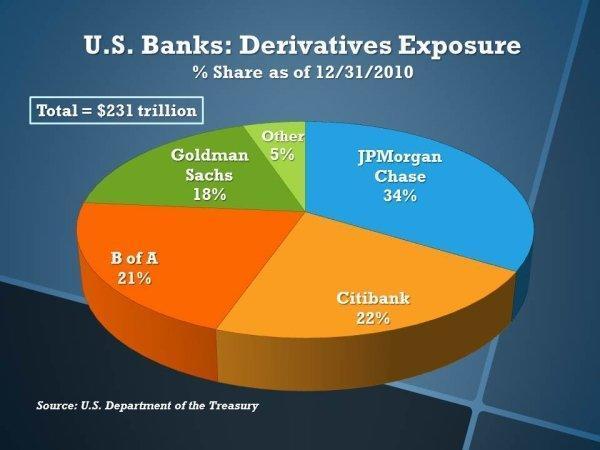 The frightening prospects from a derivative meltdown, well known for years, seem to deepen with every measure to prop up a failing international financial system. The essay Greed is Good, but Derivatives are Better, characterizes the gamble game in this fashion:

“The elegance of derivatives is that the rules that defy nature are not involved in intangible swaps. The basic value in the payment from the risk is always dumped on the back of the taxpayer. Ponzi schemes are legal when government croupiers spin loaded balls on their fudged roulette tables.”

Under conventional international trading settlement, the world reserve currency is the Dollar. The loss of confidence in the Federal Reserve System causes a corresponding decline in value in U. S Treasury obligations. Add into this risk equation, derivative instruments that are deadly threats that can well destroy national currencies. One such response to this unchecked danger can be found in a Bloomberg Businessweek perceptive article, A Shortage of Bonds to Back Derivatives Bets, makes a stark forecast.

“Starting next year, new rules will force banks, hedge funds, and other traders to back up more of their bets in the $648 trillion derivatives market by posting collateral. While the rules are designed to prevent another financial meltdown, a shortage of Treasury bonds and other top-rated debt to use as collateral may undermine the effort to make the system safer.”

However, what happens when buyers of Treasury notes abandon the reoccurring cycle of rollover debt and stop buying new T-Bonds? Take the Chinese example as a template for things to come. China’s yuan hits record high amid US pressure, “The Yuan touched an intraday high of nearly 6.2640 to $1.0, according to the China Foreign Exchange Trade System, marking the highest level since 1994 when the country launched its modern foreign exchange market.” While it is old news that the Dollar consistently drops in purchasing power, the circumvention of typical trade agreements, that by-pass transitions using the Dollar as the currency of exchange, is relatively recent. The next report forewarns of a major departure from the post Bretton Woods global trade environment.

China And Japan Move Away From Dollar, Will Conduct Bilateral Trade Using Own Currencies, is one method to avoid the direct consequences of a derivative meltdown.

“The China Foreign Exchange Trade System, the division of the People’s Bank of China which manages currency trading, said that the country will set a daily trading rate based on a weighted average of prices given by market makers. The People’s Bank said on Tuesday that an initial trading rate would be set at 7.9480 Yuan for every 100 Yen at market in Shanghai. Unlike yuan-dollar trading, which only allows for a daily fluctuation of 1 percent in Yuan trading value, Yuan trading with the Yen will be able to move within a 3 percent range.”

Timing of a Dollar reputation is almost impossible to pinpoint with precise market foreknowledge. Yet the inevitability that The Dollar is Doomed, refers to the insight of “Hans F. Sennholz in his essay – Saving the Dollar from Destruction – we are presented with a bleak financial future. Even under optimum conditions, the alternatives are not pleasant. Now let’s ask the 64,000 dollar question. What will happen when interest rates start to rise?”

The economic havoc, with the rise in interest rates, will greatly disrupt existing worldwide trade agreements and practices. In the article How The U.S. Dollar Will Be Replaced, Brandon Smith addresses the pragmatic measures undertaken by major trade partners to protect their domestic economies from a Dollar freefall.

“To those people who consistently claim that the dollar will never be dropped, my response is, it already has been dropped! China, in tandem with other BRIC nations, has been covertly removing the greenback as the primary trade unit through bilateral deals since 2010. First with Russia, and now with the whole of the ASEAN trading bloc and numerous other markets, including Japan. China in particular has been preparing for this eventuality since 2005, when they introduced the first Yuan denominated bonds. The bonds were considered a strange novelty back then, especially because China had so much surplus savings that it seemed outlandish for them to take on treasury debt. Today, the move makes a whole lot more sense. China and the BRIC nations today openly call for a worldwide shift away from the dollar:”

After historic downgrade, U.S. must address its chronic debt problems.

“Dagong Global, a fledgling Chinese rating agency, degraded the U.S. treasury bonds late last year, yet its move was met then with a sense of arrogance and cynicism from some Western commentators. Now S&P has proved what its Chinese counterpart has done is nothing but telling the global investors the ugly truth.”

The derivatives time bomb lingers over every financial market on the planet. Reforms cannot remove excess and greed, from risk management fiscal contracts. When the largest foreign trading partners look to insulate their transactions from an unstable Dollar currency, the panic has already begun.

It should be self-evident that additional U.S. Treasury bailouts with unlimited Federal Reserve claims against every asset of collateral that can be attached, is obscene in its nature. Hedging is equivalent to reassigning betting risk to unfunded insurance underwriters that would never be able to pay off the claim. Governments are broke by almost any financial standard. Central banksters accumulate titles to real property and assets by hook or crook.

Nation states held hostage to financial manipulation are slaves to the central banks. With the demise of the Dollar, the fake debt obligations of the United States must be repudiated. Foreign states are prepared to sever their links to the Dollar reserve currency, by trading directly in the domestic currencies of other countries. Interacting commerce in Dollars with American companies will continue, but the yoke of Federal Reserve Notes legal tender will be rejected when the derivative meltdown explodes.