And there is a lot more ‘peace‘ coming your way.

This cisis has only just begun

We noted earlier the somewhat surrealistic decision to award the Nobel Peace Prize to the European Union (though entirely consistent it would seem given their previous ‘Obama’ decision) but now UKIP’s Nigel Farage has weighed in with his ‘boots on the ground’ perspective of this farce. “You only have to open your eyes to see the increasing violence and division within the EU which is caused by the Euro project” he said, adding that “the awarding of this prize to the EU brings it into disrepute.” We suspect that reputation is already ‘diss’ed but analogizing the tragic imposition of a new flag on Yugoslavia, Farage concludes: “Rather than bring peace and harmony, the EU will cause insurgency and violence.” We can only assume that Bin Laden’s death forced the ‘Nobel’s to quick recount.

“You only have to open your eyes to see the increasing violence and division within the EU which is caused by the Euro project” he said.

“Spain is on the verge of a bail-out, with senior military figures warning that the Army may have to intervene in Catalonia. In Greece people are starving and abandoning their children through desperate poverty and never a week goes by that we don’t see riots and protests in capital cities against the troika and the economic prison they have imposed.

“The next stage is to abandon the Nation state: the awarding of this prize to the EU brings it into disrepute.”

Mr Farage added, “The last attempt in Europe to impose a new flag, currency and nationality on separate states was called Yugoslavia. The EU is repeating the same tragic mistake.”

“Rather than bring peace and harmony, the EU will cause insurgency and violence.”

Perhaps, in addition, as a gentle reminder, GoJam of The Needle blog can provide some color on this surreal decision:

Congratulations to the EU for Winning the Nobel Peace Prize. 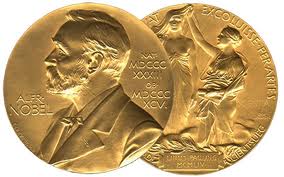 The decision, apparently was unanimous and to celebrate this momentus achievement I’ve put together a small picture gallery of peaceful Europe in 2012. 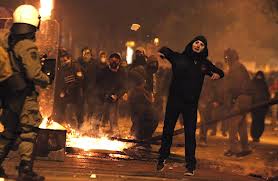 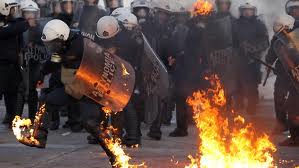 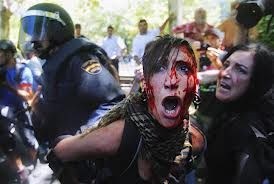