Yesterday even as the broader market slid materially, much to the dismay of permabulls everywhere, taking out post QE3 lows, one stock that obstinately refused to join the trend was Apple, which as we have noted before is the vanguard of the index known as NASDAAPL, and whichever way the NASDAAPL goes, so go America’s hedge funds, all of which have decided to piggyback on the stock in hope of catching up to the market performance and avoid being redeemed to death. Today, we get a mirror image of yesterday, when after opening at its highs, AAPL has since tumbled 2.5% from its highs, following news that an Apples court has allowed sales of Samsung Galaxy to continue. Finally, the broader market, which ramped early on hope that the intolerable Basel III requirements would be delayed by 1 year (they will be eventually as they demand that banks sell trillions in assets: something they can’t do), is about to slide not only with AAPL as the catalyst but following news from Dow Jones that the “EU Trialogue Didn’t Discuss Basel III Delay Thursday.” In other words, we ramped on a completely bogus rumor originating in Europe once again. What else is new?AAPL loses $10 billion in market cap in a few hours: 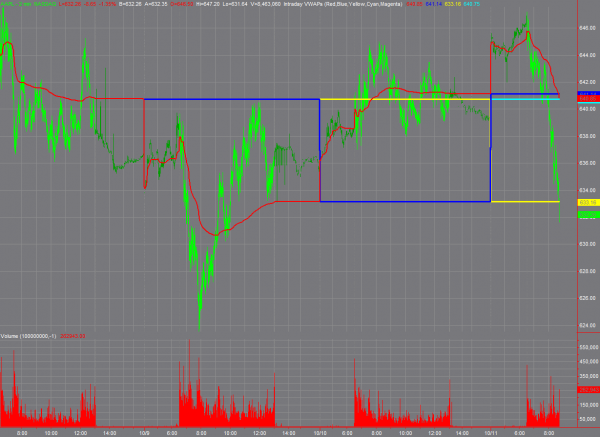 As Monty Python might have said, apart from AAPL; what has the market done for you today? S&P 500 cash managed (somehow) to cling to a green close while the Dow and Nasdaq ended red. Critically – markets went only one way all day – from upper left to lower right as we go out at the lows of the day – back again at the Draghi cliff edge and just below pre-QE levels. AAPL was a disaster – on heavy volume – as it pushed back down towards it 100DMA (over 3% from its opening highs today!) ending at its lowest in two months with its biggest slide in 5 months (last 14 days). Risk-assets in general tracked closely as while AAPL slide from the open, equity indices manage to hold opening gap gains until Europe closed and then it went pear-shaped. The USD slid all day but didn’t ‘help’ stocks as JPY weakened more (carry offsetting). Treasury yields plunged – 30Y now down 12bps on the week. Commodities all gained on the day – led by Oil (with gold/silver lagging). Meanwhile VIX ignored the debacle, gapping lower at the open and holding down 0.7vols at 15.6% as HYG handily outperformed on low volume.