“Detroit is America’s most violent city; its homicide rate is the highest in the country.” Detroit Police department’s “Enter At Your Own Risk” warning to citizens came at a rally yesterday as they fear under-staffing in the midst of what CBS reports as “the explosion in violent crime” leaves police in “deplorable, dangerous, and war-like conditions.” While the union presses for more staff – or higher wages to compensate for the risk – we are sure Snake Plissken can be relied upon to rescue GM’s CEO if he needs it. 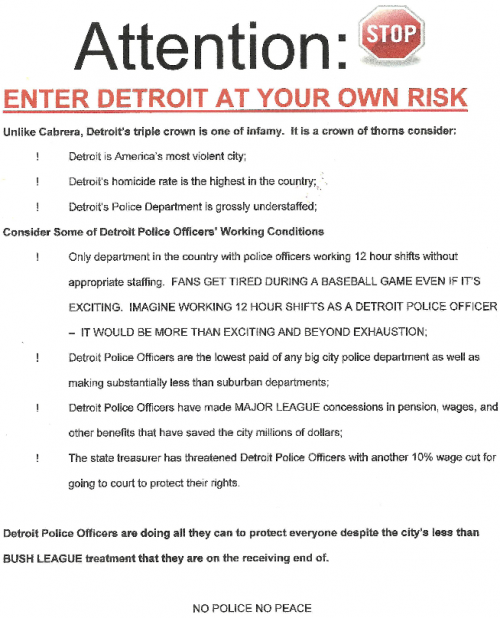 DETROIT (WWJ) – The men and women of the Detroit Police Department believe the city is too dangerous to enter, and they want citizens to know it.

Detroit Police Officer Association (DPOA) Attorney Donato Iorio said officers are holding the “Enter At Your Own Risk” rally at 3:30 p.m. Saturday in front of Comerica Park to remind the public that the officers are overworked, understaffed, and at times, fearful for their lives.

“Detroit is America’s most violent city, its homicide rate is the highest in the country and yet the Detroit Police Department is grossly understaffed,” Iorio told WWJ’s Kathryn Larson. “The DPOA believes that there is a war in Detroit, but there should be a war on crime, not a war on its officers.”

Iorio says the once 2,000 strong force is shrinking rapidly; since the start of summer, hundreds of officers have left the department.

And that’s why Iorio cautions those who enter the city to be wary.

“The explosion in violent crime, the incredible spike in the number of homicides and for officers trying to work 12 hours in such deplorable, dangerous and war like conditions is simple untenable,” he said.Iorio said the department today has less officers than ever, even though crime rates are through the roof.

“By denying police officers the appropriate manpower, there’s a manpower crisis right now, there’s 1,000 fewer police officers today than there was 10 years ago, yet the homicide rate is higher. There’s more crime now than before, so if anything you need more officers, not fewer officers,” he said.

A flyer passed out by Detroit police prior to the Oct. 6 rally.