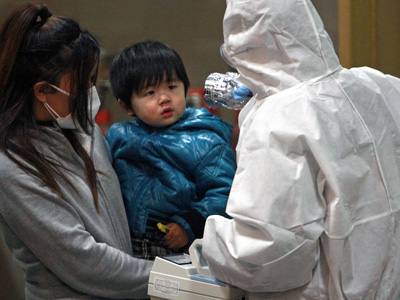 – CONFIRMED: 36 Percent Of Fukushima Kids Have Abnormal Thyroid Growths And Doctors Are In The Dark (Business Insider, July 19, 2012):

A few days ago we reported that 36 percent of Fukushima children have abnormal thyroid growths likely from radiation exposure, based on the “Fukushima Prefecture Health Management Survey.”We got in touch with Australian pediatrician Dr. Helen Caldicott, who has spoken about the growths, to ask her about the implications of the study.

After confirming the validity of the report, Caldicott reinforced the alarming nature of the findings:

1. “It is extremely rare to find cysts and thyroid nodules in children.”

2. “This is an extremely large number of abnormalities to find in children.”

3. “You would not expect abnormalities to appear so early — within the first year or so — therefore one can assume that they must have received a high dose of [radiation].”

4. “It is impossible to know, from what [officials in Japan] are saying, what these lesions are.”

Doctors worry about these abnormal growths because even though thyroid nodules are relatively common, they are not as common in children and some of them could become cancerous.

When asked why these results haven’t been widely reported, Calidcott noted that Japanese officials are not sharing ultrasound results with foremost experts of thyroid nodules in children and accused the media of “practicing psychic numbing,” saying that she doesn’t understand why media outlets are choosing to ignore the nuclear fallout.

Caldicott explained that the high rate of abnormal growths in Fukushima children is very unusual — it usually takes five to 70 years to see what the medical implications of radiation are — and insisted that the international medical community become involved.

We also spoke with Dr. Bryan Haugen, president-elect of the American Thyroid Association and head of endocrinology at the University of Colorado School of Medicine, who hadn’t heard of the report before we contacted him.

Haugen agreed with the Caldicott’s assessment that it is surprising for kids to “have this many nodules and cysts seen, especially this soon after the accident,” and the fact that “this something that is not more widely known.”

He added that ultrasound technology is much more sensitive today so cysts (i.e. small sacs of fluid) smaller than 2 centimeters don’t need to be biopsied but solid nodules (i.e. clumps of cells) larger than 5 millimeters should be biopsied.After Chernobyl, Haugen notes, radiation physicists calculated the radiation risk to children by measuring exposure and then finding out how many kids had nodules and how many had cancer. Chernobyl children were found to have a lot of solid nodules, but the Fukushima results reveal a lot more cysts so “it’s a bit different.”

The New York Academy of Sciences estimates that nearly one million people around the world have died from exposure to radiation released by the 1986 nuclear disaster at the Chernobyl reactor.

Haugen said that he hasn’t read or heard about specific data on the Fukushima radiation risk or about comparisons between Fukushima and Chernobyl.

If a nuclear disaster occurred in the U.S., Dr. Haugen said the American Thyroid Association would “want to get this information out … in a few different venues to let people know whats going on … [and] appropriately critique the data. If it’s not widely available, it’s hard to review and critique.”