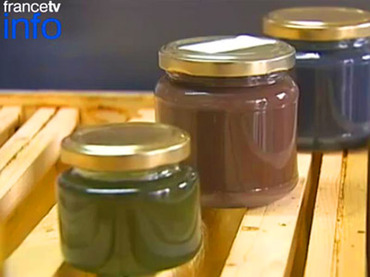 Beekeepers in north eastern France have been scratching their heads after the hives began to produce a weird colored substance instead of regular honey. They think candy M&Ms are to blame.

The bees around the town of Ribeauville in the Alsace region have been carrying an unidentified colored substance back to their hives since August. The keepers have done a bit of sleuthing and think the Agrivolar biogas plant around 4 kilometers away is to blame.

The enterprise has been processing waste from a Mars factory producing the colored M&M’s. The waste products have been stored in open containers and the bees could easily access the contents.

“We discovered the problem at the same time they did. We quickly put in place a procedure to stop it,” Reuters quotes Agrivalor manager Philippe Meinrad as saying. The plant said they would now store waste indoors and in tightly closed containers.

The beekeepers have already suffered high bee mortality due to the coldness of last winter. They are now wondering what to do with the colored honey and whether their bees will survive after dealing with the chemicals, Alain Frieh, president of the apiculturists’ union said. Also they will have to face a decline in sales, as they won’t be able to make much money out of the blue and green honey.

“For me, it’s not honey. It’s not sellable,” Frieh says adding that the substance still tastes like honey.

France is among the major producers of honey in the EU. There are around 2,400 beekeepers in the Alsace region producing about 1,000 tons of honey per year, according to the region’s chamber of agriculture.