Iranian clerics’ attempts to curb speculation in the Rial and stabilize the currency appear to have backfired as the un-official (real) Rial rate traded as low as 34,250 Rial to the USD this morning – a massive 20% plunge. Demand for gold is surging (as Tehran exchange volume is up almost 18% today) as the population appears to be readying itself for hyperinflationary death – as we wrote yesterday, it really is no fun in Iran. The following tables/links will allow the real-time monitoring of that market’s collapse – since Bloomberg’s official rates are entirely useless.
Via Reuters:

The rial’s losses have accelerated in the past week after the government launched an “exchange centre” designed to supply dollars to importers of some basic goods at a special rate slightly cheaper than the market rate.

Instead of allaying fears about the availability of dollars, the centre seems to have intensified the race for hard currency by linking the special rate to the market rate, meaning that even privileged importers will face sharply higher costs.

“The government’s initiative … brought to the surface a tremendous lack of confidence in its ability to manage the currency,” said Cliff Kupchan, a Middle East expert at the Eurasia Group, a political risk research firm. “The attempt to fix it triggered a worse crisis via market psychology.”

It appears that locals are extremely active in selling out of their Rials and moving it into Gold (implicitly via the USD we pre-suppose). The rates for Gold across markets and weights/scales in Iran can be found here – www.mesghal.com

Open the following tables in a Chrome browser (and Translate)… 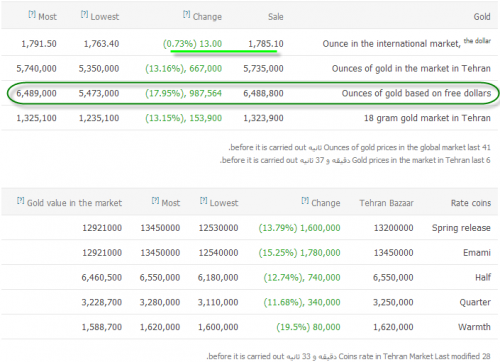 and the un-official (real) FX Market… 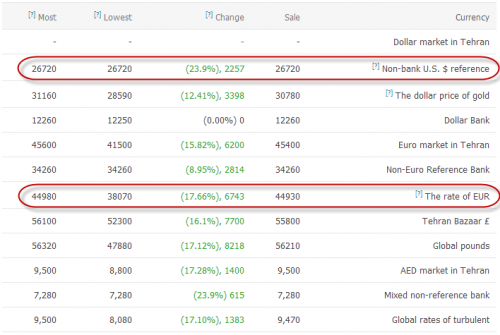