Regular readers are aware that periodically, usually weekly, Zero Hedge presents critical naval updates demonstrating the positioning of key US maritime assets, primarily strategic aircraft carriers. The location of these indicates far more what US foreign policy is focused on at any moment, than propaganda distributed for general consumption via the coopted media. Today, however, instead of focusing on aircraft carriers, using Stratfor analysis, we present several broad “curious” US and French military developments.What the ultimate purpose of these movements is for now unclear – they may be perfectly normal deployments or they may be a precursor to something more. Remember: we know that both CVN-74 (which is currently just briefly caught up in that whole Senkaku Snafu between Japan and China) Stennis and Marine force LHA-1 Peleliu are en route to Iran, where following last week’s modestly paliative Netanyahu comments, the military strategists believe the tide has turned and there will be no war with Iran in the immediate future. Ironically, following a spike in war chatter in the early summer, we said that precisely because of that there will be no conflict imminently as the Israeli military will never telegraph what it plans on doing in advance.

And, as always when dealing with military data originating from “sources”, reader beware. Ultimately, even if untrue, the information will provide hints about whose agenda it is to foment military tensions.

According to a worldwide network of aircraft spotters and trackers, at least a dozen MC-130H, HC-130N, HC-130P and AC-130U military transport planes and gunships crossed the Atlantic Ocean on Sept. 13 heading eastbound. These aircraft are typically used for a variety of special tasks, including in close cooperation with special operations forces. The last reported stop for the aircraft was Souda Bay, Crete. It is unclear whether the aircraft have left Crete, but we are working on tracking them down. 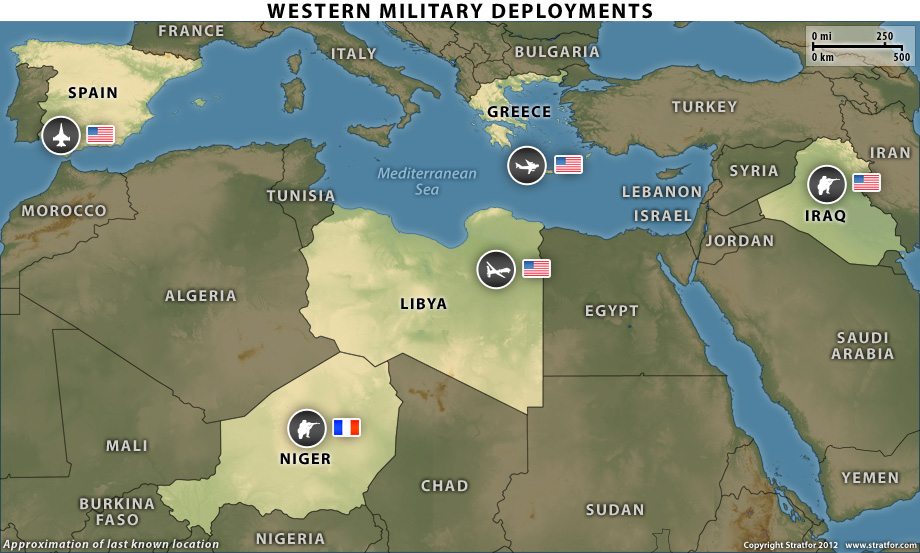 A week and a half later, on Sept. 24, the same network of aircraft spotters noted 12 U.S. Marine Corps F/A-18 Hornet fighter jets arriving in two waves at Moron air base in Spain. It is not known where the squadron is heading, though it could be en route to Afghanistan to reinforce elements there. The Harrier squadron that suffered heavy losses in the Sept. 14 attack on Camp Bastion has already been replaced by another Harrier unit, so it is unlikely that the squadron’s deployment is directly linked to that event. It is also possible that the F/A-18s are heading to the Gulf Cooperation Council region. A number of air superiority squadrons, including an F-22 Raptor squadron, have already deployed to the region. If that is the case, the squadron is intended simply as reinforcements or replacements for assets currently deployed there.

Also on Sept. 24, The New York Times published an article stating that Iraq and the United States were negotiating an agreement that could result in the return of small units of U.S. soldiers to Iraq on training missions. At the request of the Iraqi government, according to U.S. Gen. Robert Caslen, a unit of Army special operations soldiers was recently deployed to Iraq to advise on counterterrorism and to help with intelligence. It is possible that at least some of the MC-130 aircraft previously mentioned were delivering these special operations troops to Iraq.

Another report on Sept. 24, this one by the Le Figaro French-language newspaper, said some 100 French special operations troops had been deployed in the sub-Saharan region to counteract militants in northern Mali. Le Figaro also reported that maritime patrol aircraft that can be used to collect intelligence will be deployed to the region and that commandos of the French navy will reinforce the French special operations troops.

Finally, Italian journalist Guido Olimpio reported in September that U.S. unmanned aerial vehicles are currently tracking militants in Cyrenaica, the historical name for eastern Libya. He also said “reliable sources” had confirmed that U.S. special operations forces were planning to carry out intelligence operations that could be in preparation for surgical strikes in North Africa, including in Libya and in Mali.

All these deployments could be previously scheduled movements for training or part of ongoing operations. They also do not necessarily mean any one mission is imminent. The United States and France could simply be positioning military assets in a region that is rife with conflict and that may eventually require rapid military intervention or action.