When it comes to spying, eavesdropping on its citizens as well as the complete invasion of American privacy, the first thing that comes to mind is the Patriot ACT and Dubya. And with good reason: because while the rest of the world may “hate us for our freedoms”, they certainly love us for the fact that the NSA usually can autocomplete sentences before they are written in any electronic medium (recall: NSA Whistleblower Speaks Live: “The Government Is Lying To You“). However, as it turns out that the first thing that should be coming to mind is none other than the current administration and Barack Obama. Here are the facts: as the ACLU reveals using documents released by the Justice Department following months of litigation, “federal law enforcement agencies are increasingly monitoring Americans’ electronic communications, and doing so without warrants, sufficient oversight, or meaningful accountability.” How “increasingly”? Look at the chart below and decide. 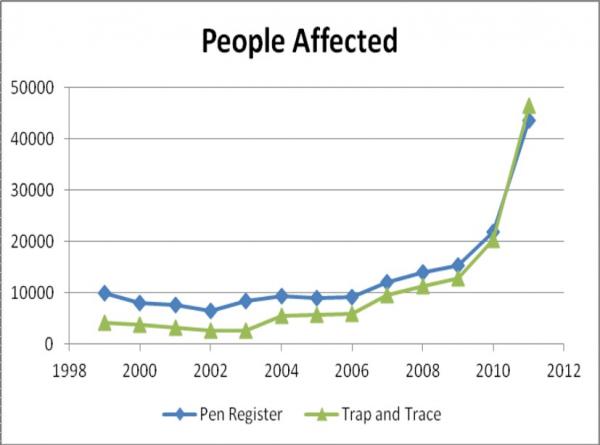 And that’s just the tip of the iceberg.

This is how Uncle Sam spies on you:

Pen register and trap and trace devices are powerfully invasive surveillance tools that were, twenty years ago, physical devices that attached to telephone lines in order to covertly record the incoming and outgoing numbers dialed. Today, no special equipment is required to record this information, as interception capabilities are built into phone companies’ call-routing hardware.

Pen register and trap and trace devices now generally refer to the surveillance of information about—rather than the contents of—communications. Pen registers capture outgoing data, while trap and trace devices capture incoming data. This still includes the phone numbers of incoming and outgoing telephone calls and the time, date, and length of those calls. But the government now also uses this authority to intercept the “to” and “from” addresses of email messages, records about instant message conversations, non-content data associated with social networking identities, and at least some information about the websites that you visit (it isn’t entirely clear where the government draws the line between the content of a communication and information about a communication when it comes to the addresses of websites).

This is how Uncle Sam has been spying on your more in the past three years than ever before:

Electronic Surveillance Is Sharply on the Rise

The reports that we received document an enormous increase in the Justice Department’s use of pen register and trap and trace surveillance. As the chart below shows, between 2009 and 2011 the combined number of original orders for pen registers and trap and trace devices used to spy on phones increased by 60%, from 23,535 in 2009 to 37,616 in 2011. 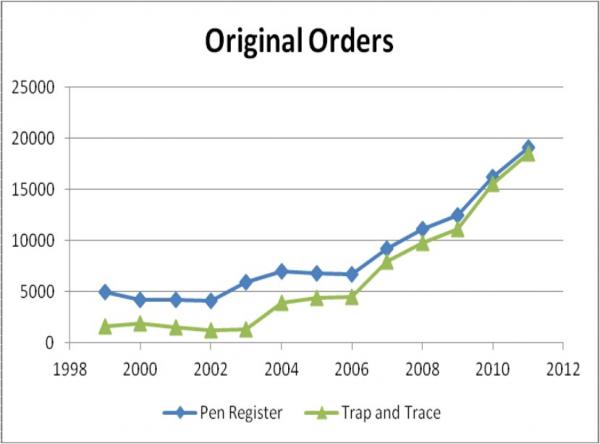 During the past two years, there has also been an increase in the number of pen register and trap and trace orders targeting email and network communications data. While this type of Internet surveillance tool remains relatively rare, its use is increasing exponentially. The number of authorizations the Justice Department received to use these devices on individuals’ email and network data increased 361% between 2009 and 2011. 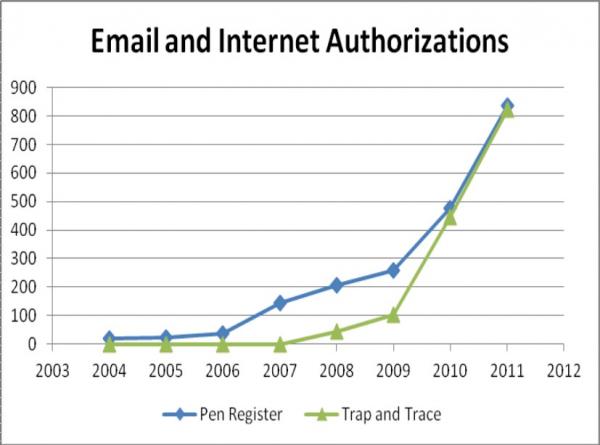 The sharp increase in the use of pen register and trap and trace orders is the latest example of the skyrocketing spying on Americans’ electronic communications. Earlier this year, the New York Times reported that cellphone carriers received 1.3 million demands for subscriber information in 2011 alone. And an ACLU public records project revealed that police departments around the country large and small engage in cell phone location tracking.

My Administration is committed to creating an unprecedented level of openness in Government.  We will work together to ensure the public trust and establish a system of transparency, public participation, and collaboration. Openness will strengthen our democracy and promote efficiency and effectiveness in Government.

I direct the Chief Technology Officer, in coordination with the Director of the Office of Management and Budget (OMB) and the Administrator of General Services, to coordinate the development by appropriate executive departments and agencies, within 120 days, of recommendations for an Open Government Directive, to be issued by the Director of OMB, that instructs executive departments and agencies to take specific actions implementing the principles set forth in this memorandum. The independent agencies should comply with the Open Government Directive.

Who knew that he was really telling the CTO to coordinate on the transparency and opepness of your emails.