Unable to win US support for a figurative ‘red line’ on Iran’s nuclear program, Israeli PM Benjamin Netanyahu drew a literal one during a speech to the UN General Assembly, and offered an apocalyptic vision of a nuclear bombing of Israel.

­Netanyahu used a large diagram of a cartoonish bomb to represent Tehran’s alleged ambition to create a nuclear weapon. The drawing was divided into three sections, with marks indicating 70 percent and 90 percent of the uranium enrichment required to build an atomic bomb.

“Iran is 70 percent of the way there, and are well into the second stage. By next summer, at current enrichment rates, they will have finished the medium enrichment and move on to the final stage. From there it is only a few more weeks before they have enriched enough for a bomb,” he said.

The Israeli leader used a red marker to show the line at which he believes the world should intervene to halt the enrichment, claiming that this was the only way to peacefully resolve the issue.

“I believe that faced with a clear red line, Iran will back down – and it will give more time for sanctions and diplomacy,” he said, adding that the deadline may come as soon as next Spring.

The alternative, Netanyahu said, is a nuclear-armed Iran, which he likened to a nuclear-armed Al Qaeda. He called the Iranian leadership “apocalyptic,” and argued that they would use a nuclear weapon against Israel even if it meant the destruction of their own country.

The diagram implied that Iran is amassing enriched uranium with the intention of creating a nuclear device, and that at the 90 percent mark it would be very close to completion. Netanyahu did not offer any new evidence that Iran had overcome the numerous other scientific and technological hurdles necessary to create a nuclear weapon.

Tehran dismissed Netanyahu’s charges as “baseless and absurd.” Israel, “on a daily basis, threatens countries in the region, particularly my country with military attack,” Iran’s Deputy Ambassador to the UN Asman al-Habib Es’haq Al-e-Habib said. He warned that Iran would retaliate if Israel attempted to attack Iranian nuclear facilities.

He also said, that Israel “has ignored repeated calls by the international community to accede promptly and without any conditions to the Non-Proliferation Treaty as a non-nuclear weapons party and place all its nuclear-related facilities under the International Atomic Energy Agency verification system.”

Netanyahu is not the first politician to use props at the United Nations to call for international action against a sovereign country. In February 2003, then-US Secretary of State Collin Powell spoke before the UN Security Council holding a vial that he said could contain anthrax produced by Saddam Hussein. No anthrax or other alleged weapons of mass destruction were found in Iraq after it was invaded and occupied by a US-led coalition. 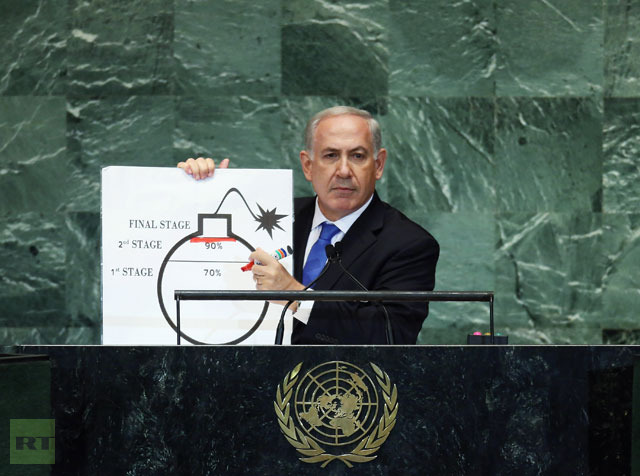 Benjamin Netanyahu, Prime Minister of Israel, pauses after drawing a red line on a graphic of a bomb while discussing Iran during an address to the United Nations General Assembly.(AFP Photo / Mario Tama)

­Netanyahu has been campaigning for a “clear red line” to curb Iran’s alleged nuclear ambitions since the beginning of September. The hard pressure apparently cost him a meeting with US President Barack Obama. The American leader refused to sit down to talks with Netanyahu on the outlines of the 67th UN General Assembly after the Israeli PM lashed out at Washington’s unwillingness “to set deadlines” for Iran.

The address to global leaders may well be a final warning before Israel takes matters into its own hands. The country’s leadership has been relentlessly issuing warnings that it may soon stage a unilateral attack on Iran, flouting even American wishes.

Israel considers Iran an “existential” peril, given the rhetoric coming from the Islamic Republic’s leaders that Israel will be eliminited.

The US, while trying to keep Israel away from attacking Iran, believes that Tehran is yet to make a final decision on whether to use its uranium stocks to build weapons. So far, in Washington’s opinion, the Islamic Republic does not appear to possess the necessary infrascture to do so.

‘Nothing will happen until November’

Netanyahu does not need to convince the entire world of his fears, as one actor is sufficient, Shikha Dalmia, senior policy analyst at the think tank Reason Foundation told RT.

“He is trying to raise the alarm level in the world over the possibility of a nuclear Iran,” she said. “But the fact of the matter is that he does not have to convince the whole world of his case. He just has to convince one country and essentially one person, and that is President Obama. Without US support for some kind of military intervention, he can draw whatever maps and charts and other graphs that he wants. It’s not going to mean a lot.”

And no matter what the US administration opts to do, it will have to wait until November, says Dalmia.

“One can argue that Iran would not be a full-fledged war, it would be a surgical strike, but it is till quite a lot,” she said. “So whether Obama is going to be able to undertake an action like that is completely up in the air, but one thing is clear: he will not want it before November, before the elections.”