– Paul Ryan: ‘Do you want Barack Obama to be re-elected? Then don’t vote for Ron Paul.’

What if I want to vote for Ron Paul? Can I vote for him then?

– Paul Ryan’s Latest Whopper: Oops, I ‘Overlooked’ 20% Of My Income 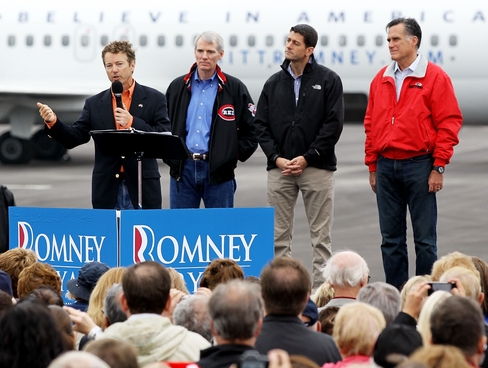 DAYTON, Ohio — Mitt Romney and Paul Ryan arrived in Ohio this week to news of dropping poll numbers and a widening gap in the Buckeye state between the Republican nominee and President Obama. Luckily, they brought back up.

Sen. Rand Paul,R-Ky., joined the pair on the road Tuesday, and while he had planned to campaign for Romney, his appearance on the trail couldn’t have come at a better time. The libertarian worldview that made him and his father — Rep. Ron Paul, R-Texas — populist heroes was on full display in his brief remarks before he introduced Romney and Ryan. Paul told the crowd he was “mortified” by the fact that people in foreign countries are on television burning the American flag and yet still receive foreign aid.

“They are attacking our embassy, burning our flag, torturing and imprisoning the man who helped us get (Osama) bin Laden . . . what’s President Obama’s answer? Send them more of your money,” Paul said as the crowd booed.

Paul’s popularity could help reenergize Tea Party activists and help attract more libertarian voters to vote for Romney local tea party leaders and voters here said. The elder Paul received a little more than 9% of the vote in the state’s March presidential primary. “Hopefully he can steal some of those Ron Paul votes,” said David Richeson, 59, a toolmaker from Dayton. Richeson said anyone who is still undecided at this point is more likely to vote for Romney than Obama.

One Republican strategist with close ties to Sen. Paul’s organization said he could be particularly helpful to Romney in parts of Southern Ohio closest to his home state. “It’s a stamp of approval,” said the strategist who spoke on background because he was not authorized to speak on behalf of the campaign.Marianne Gasiecki, founder of the Mansfield Tea Party in Mansfield, OH, an affiliate of Tea Party Patriots, did not attend the Dayton rally but said Paul’s appearance served as a good reminder to conservatives where Romney stands when they are worried that he may not be as right-leaning as they had hoped. “It shows that he is gravitating toward conservatives,” Gasiecki said. “It’s a good sign.”

Libertarians and Paul supporters were more skeptical. At a forum in Lima on Monday, a man stood and asked Ryan why Paul supporters should cast a vote for his ticket instead of a third party. Ryan responded,”Do you want Barack Obama to be re-elected?”

Some said it was unlikely that many former Paul voters would swing their loyalty to Romney, despite the endorsement of the younger Paul.”I don’t think they will end up supporting Mitt Romney,” said Chris Littleton, a grassroots activist based in Cincinnati. “There will be people who vote for (Libertarian Party nominee) Gary Johnson and yes, some people who will vote for Romney, I just don’t think the majority will.” Littleton added, “Many think Romney isn’t significantly different from Obama.”

Derek Landis, an Iraq war veteran and founder of a grassroots group in the Cincinnati area called LibertasFound, said Romney’s message on intervention is too different from that of the Liberty movement that many Ron Paul supporters say the congressman represents. “One of the platforms of the Liberty movement is very pro-peace,” he said, adding that he would likely cast a vote for Johnson.

Sen. Paul and Ohio Sen. Rob Portman joined the two candidates on the blustery afternoon as a part of the campaign’s three-day bus tour through the Buckeye State. Romney has pledged to pick up the pace in the waning weeks of the contest following criticism that the candidate was spending too much time fundraising.

Rich Beeson, Romney’s political director, said the campaign was not rattled by recent polling showing Obama in the lead. A poll released Sunday by the Cincinnati Enquirer/Ohio Newspaper Organization showed Obama leading Romney 51%-46% among likely voters; a Washington Post poll released Tuesday showed Obama up by 8 points in the state.

“These polls are all over the place,” Beeson said, pointing to polling in states like New Hampshire, Iowa and Virginia where the numbers vary wildly from one day to the next. “You have different people weighing in different ways, we have our internal data and that’s what we base our decisions on.”

Beeson said Paul’s appearance on the trail simply helped amplify the campaign’s message that the country can’t afford four more years with Obama as president. “Keep plugging away, keep doing what we are doing, it will go our way,” he said.

Romney in an interview on CNN said largely the same thing. “Polls go up and down, he said, “but frankly, you’re going to see the support that I need to become president on election day. People recognize that we don’t want a government getting larger and larger and more intrusive in our lives.”