In the aftermath of the recent stories about Tungsten-filled 10 ounce gold bars discovered in midtown Manhattan, there have been two broad sentiments expressed by the precious metals community: i) that this is as many have expected, and that of the physical inventory in circulation, much is fake (particularly that held in official hands, either via ETFs or in sovereign repositories which for various reasons still can not be publicly assayed) and ii) is the comfort that while it is relatively easy and cost-effective to use tungsten to falsify larger gold bars and bricks, those who own primarily gold coins are safe as for some reason, it is less economic, feasible or widespread to counterfeit smaller precious metal denominations. Sadly, while i) may be true, ii) is patently false. The proof comes courtesy of a firm called ChinaTungsten Online which proudly markets its broad “tungsten-alloy services” including, you guessed it, the gold plating of various tungsten formulations among them “gold” bricks, bars and, yes, coins. Oh did we mention a Chinese company openly advertizes its tungsten gold-plating and precious metals replication services, something which the tabloid media’s CTRL-C/V majors openly mock as improbable conspiracy theory. Well, as they say, it is only conspiracy theory until it becomes conspiracy fact. 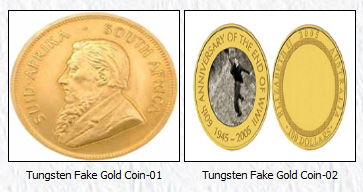 Therefore, if you are interest in tungsten fake gold coin, please feel free to contact sales@chinatungsten.com, or telephone 86 592 512 9696.

Well at least the company that markets itself as proving “all kinds of tungsten fake gold coin” has extensive disclaimers. The point is that anyone wishing to, can procure tungsten-plated gold coins with one simple telephone call.

Of course, for those for whom gold coins are not enough, the Chinese firm is happy to provide every other imaginable formulation. Such as Tungsten fake gold bars:

Detecting a high-quality tungsten fake gold bar would be extremely difficult. It would likely require significant and material alterations to the bar being tested and this would negatively affect the marketability if its hallmark veracity were vindicated. Some applications require the tungsten to be fake gold. The main reasons for tungsten fake gold bar are to protect the wire from corrosion or to solder it to other metals.

Notice: Chinatungsten Online (Xiamen) Manu.&Sales Corp. is a very professional and serious company, specializing in manufacturing and selling tungsten fake gold and other tungsten related products for more than two decades. Our tungsten fake gold product is only for souvenir and decoration purpose. Here we declare: Please do not use our gold-plated tungsten alloy products for any illegal purpose. 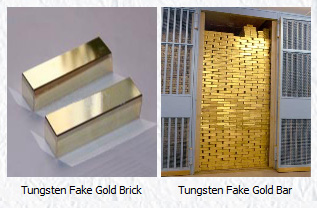 There are many more options, for those who are so inclined, to reinforce their inventory of gold-plated tungsten products on the company’s website. And naturally, in addition to the bolded applications of tungsten gold bars, one can conceive of some more. Especially in verticals in which the actual end product does not exist, and all that does exist is a receipt claiming gold is at the end of a rehypotehcation chain. One wonder how many invoices CIF Liberty 33 or various other gold ETF secret “warehouses” one could find upon rummaging through the garbage behind the firm’s headquarters in Xiamen.

With all that said, perhaps the best use of the abovementioned services would be for a contingency case in which the government of country X, Y and/or Z were to decide to replicate a certain 1930’s executive order in a global coordinated attempt to devalue the fiat system not on a relative basis, something which fiat printers are more than capable of, but on an absolute basis by confiscating all the gold in circulation. It just might make such a confiscation more complicated if all the usual suspects were to hand over to said governments not gold but gold-plated Tungsten, which in turn would make the endgame, i.e. the terminal currency devaluation of fiat, that much more problematic.

It would be truly ironic if in the end the same Tungsten that is now the bane of precious metals dealers everywhere would be the reason why central bank X, Y and/or Z was unable to destroy its currency sufficient fast.

Note: Zero Hedge does not advise, encourage nor endorse its readers to hypothetically exchange their gold inventory for a comparable but worthless yet prominently positioned inventory of “rehypothecated” pseudo-equivalent products – note that only bankers have been known to rehypothecate valuable assets into worthless liabilities – in advance of an even more hypothetical physical gold confiscation order endorsed by the authorities.

1 thought on “Where To Get Fake Tungsten-Filled Gold Coins … AND … ‘Please Do Not Use Our Gold-Plated Tungsten Alloy Products For Any Illegal Purpose’!!!”