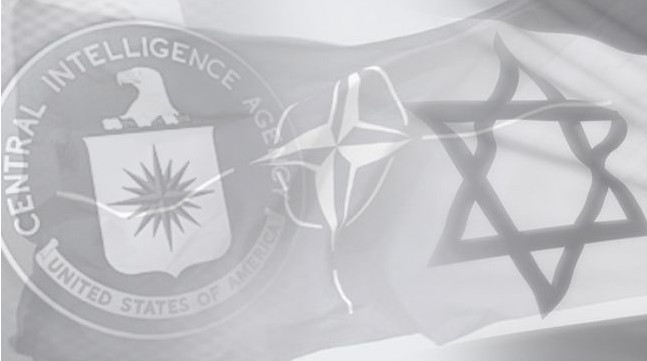 Much has happened this week, conflicting stories, the hand of intelligence agencies and special operations groups seen everywhere, controlled and orchestrated press, jumping from one farcical conspiracy theory to another.

Behind it all, two names are seen as so desperate to try to light the world aflame, an effort underway in Syria for some time, an effort perhaps not working out as well as hoped.

The names are Netanyahu and Romney though few believe “Mitt Romney” to be more than a puppet.   A careful examination of his life, misrepresented as one of wealth and accomplishment shows him to be emotionally unstable, shallow, lazy and inept, a life of trickery and deceit under the protection of a powerful family and its even more powerful friends.

Netanyahu, perhaps another puppet, but not so benign, fumes away at the world, reports of his encroaching insanity and its threat to Israel and world peace are now impossible to hide.  There is nothing “Jewish” or “Semitic” about Netanyahu, just psychotic.

This week of violence lands entirely on his doorstep, his and his “lapdogs” in the US, extremists at the fringe of power still controlling America’s massive private armies and intelligence groups, a major portion of the entire world’s might wielded by corporations, used to advance the plots and conspiracies of groups now long accepted as eccentric, homicidal and apocalyptic.

This week with the upheavals across the Middle East over a mysterious and extreme attack on Islam and its institutions, the real culprits are using the press to hide their intention and identities.

To cover their tracks, the real conspirators, stories about “youtube” and “Coptic Christians” and a forgotten and tasteless film long consigned to the trash heap are used to disguise the real criminals.

Ethnic and religious attacks like the ones largely responsible for the protests, all except the US Embassy attack in Libya, are considered crimes in most nations.  In Canada, Australia, Germany, France and many other nations, anyone who has questioned Israel’s politics or accused anyone of Jewish background, no matter if they are caught with a bloody knife in their hands, of wrongdoing are considered criminals and consigned to a decade or more in prison.

In the United States, there is a long history of jailing anyone whose actions lead to violence.  By the standard of law applied to the Chicago 7 and other Vietnam War protest groups, Terry Jones would be arrested for not only inciting a riot but for conspiracy to commit murder, acts in support of terrorism and hate crimes.

American laws cover each of these areas and his actions, were he who he says he is, an Islamophobe fanatic responsible for a massive internet onslaught of pornography, bigotry and purposeful instigation of attacks on Americans overseas, he would be in jail now, and should expect never to be released.

However, the “reverend” Terry Jones, the real culprit, can expect, any time he wishes, full support for anything he does, even if millions of emails are sent out, even if the bandwidth of the entire Internet is needed to spew his filth.

Terry Jones has worked for the CIA for much of his life, initially coordinating recruitment of terrorist groups in Germany under the Gladio program.  Years ago, NATO hired social misfits and psychopaths to set up terror groups that were intended to become “underground cells” if the Soviets invaded Europe and Latin America.

Terror groups organized by NATO were set up in 36 nations on 3 continents.  When no Soviet invasion happened, they began operating independently, 20 years of bombings across Europe as “P2,” war in El Salvador, Guatemala, Chile, Argentina, Angola, drug operations in Columbia, revolutionary groups in Nicaragua and Mexico, the “saviors of NATO” became the basis of terror organizations around the world, organizations now blamed on “extremists.”

The real extremists were NATO and the story is a simple one.  After World War II, there were two influxes of recruits into US intelligence.  First was the Galen group from NAZI Germany, brought into the US by CIA head Allen Dulles under Operation Paperclip and eventually run by George H.W. Bush and former German SS General Walter Dornberger.

This group arranged the murder of John F. Kennedy, Robert Kennedy, partnered with extremist groups in Israel and led the US down the path to oligarchical control, as is so obviously exhibited in America’s behavior around the world.

Gladio was one of their ploys, a Hitleresque plan to fight communism hijacked by a cabal of powerful international organizations, banking, oil, weapons, intent on world domination.

The second input to this organization was after the fall of the Berlin Wall when hundreds of highly trained STASI spies and killers were recruited by right wing extremist groups within the US.

They were brought into the CIA and other intelligence agencies, took over key security agencies in Europe and used their unparalleled training, skills and brutality to reinvigorate efforts toward world domination by the interests we never see except when watching Israel or the Wall Street Banks, the clumsy and stupid buffoons of the New World Order.

The truth can be difficult to accept, if not impossible.  Those who sacrifice in brutal wars are hesitant to admit, no matter how compelling the evidence, that their efforts were, in actuality, in service of great evil.

During the early 20th Century, a Marine General, two time winner of the Medal of Honor came to the realization that all wars were economic, that all use of military force was a form of robbery.  Smedley Butler was his name.  He considered himself a “gangster for Wall Street” and, for those familiar with his teachings and military theories, considered one of the greatest men of our time.

Butler was a famous American hero, a lifelong enemy of both communism and fascism, once imprisoned for insulting Italian Prime Minister Benito Mussolini over an incident where Mussolini ran down a small child with his Bugatti and drove off without notice.

Today the single dead child might well be the endless dead from 9/11, an event now believed by most legitimate experts to have been staged with no Muslim terrorists involved and considerable complicity from the Bush administration with very strong evidence pointing toward Israeli operational capabilities.

The realities of human development, long stifled by decades of colonial rule, were coming to an end.  The fall of Mubarak, in particular, an Israeli stooge wearing the mask of a Muslim leader, being the most dramatic.

With Egypt “in the wind” as it were, only a civil war between Christians and Muslims could put off the disaster Netanyahu feared, an America sick of war, an American military unwilling to occupy the Middle East as an Israeli surrogate and a people who may well be slowly awakening to find their government infiltrated and bought by criminal interests hard wired to Netanyahu and his gangster friends.

Intelligence sources in Libya tell us that a team arrived from the UAE set to infiltrate the demonstrators and butcher the American ambassador and his elite security team.

Perhaps it is this relationship that is the sickest of all, the circle of deception between the Gulf States, Saudi Arabia and Israel, all nations based on foreign slave labor, American military protection and rule by brutality and deception.

I am reminded of a line from a film, “The Usual Suspects.”

“The greatest trick the devil ever pulled was to convince the world he didn’t exist.”

With the web collapsing around Tel Aviv and the maniac unlikely to die outside a bunker as his enemies close in around him, Netanyahu still has his hands on the strings that control puppets around the world, the press, entertainment industry, key world leaders, the list is considerable as is his ability to do evil as this week has shown us.

Netanyahu and his brother in strife, Rupert Murdoch, put three consecutive British prime ministers in office and controlled them and the security services through bribery and blackmail.

His empire nearly brought down President Clinton, helped rig the election of President Bush 43 twice, started two wars and almost a third and, despite opposition, stands ready to destroy the world over Syria and Iran.

In the process, the only surviving economy in the world may be the US, though hopelessly in debt and battered by a decade of rule by foreign gangsters.

Even the super-economy of China has become brittle; the German money-machine is grinding to a halt and nations hoping for the benefits of science and human development languish yet another decade.

All of this was no accident.

The last week was no accident either, every member of the press pouring out the deceit, so many governments silent or complicit and those responsible knowing they will never be called to settle accounts.