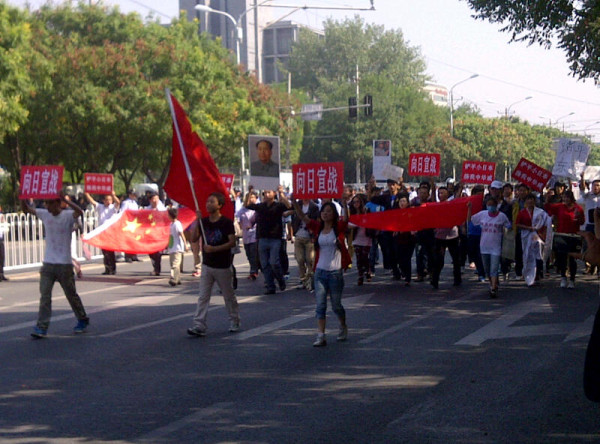 Yesterday we described that anti-Japan sentiment across China was spreading like wildfire with some even suggesting it is time to declare war on Japan (see picture) in retaliation for the unprecedented shift in Japan’s status quo vis-a-vis the Senkaku Islands. Today it has gotten even worse. From Reuters: “Chinese police used pepper spray, tear gas and water cannon to break up an anti-Japan protest in southern China on Sunday as demonstrators took to the streets in scores of cities across the country in a long-running row over a group of disputed islands. The protests erupted in Beijing and many other cities on Saturday, when demonstrators besieged the Japanese embassy, hurling rocks, eggs and bottles and testing police cordons, prompting the Japanese prime minister to call on Beijing to ensure protection of his country’s people and property. In the biggest flare-up on Sunday, police fired about 20 rounds of tear gas and used water cannon and pepper spray to repel thousands occupying a street in the southern city of Shenzhen, near Hong Kong. Protesters attacked a Japanese department store, grabbed police shields and knocked off their helmets. One protester was seen with blood on his face. At least one policeman was hit with a flowerpot.” And while the populist reaction was widely expected, the most surprising development came from Japan, where the designated ambassador to Beijing mysteriously died several hours ago after collapsing in the street without any obvious cause.

Japan’s ambassador-designate to China, Shinichi Nishimiya, died on Sunday in a Tokyo hospital, the Foreign Ministry said, three days after he was found unconscious on a Tokyo street.

Doctors were looking into the cause of death, ministry official Takashi Ariyoshi said in a statement, but no other details were available. Nishimiya, 60, was found unconscious on a street near his home on his way to work.

Nishimiya was to have left in mid-October to take over from Uichiro Niwa as Japan’s top envoy in Beijing.

While coincidental, Nishimiya’s death came as tensions flared up between Japan and China over a disputed group of islands in the East China Sea claimed by both countries.

It remains to be seen how coincidental his death is: perhaps no less coincidental than the suicide of the Japan’s Finance Minister who hung himself last week for “reasons unknown” and who happened to be deputy minister for disaster reconstruction when the Fukushima disaster struck. The same Japan which for over a year has been calming the world that all is well regarding the deadliest nuclear disater since Chernobyl. The media will have you know none of these events are in any way tied to each other.

Finally, as all this is happening, China has started a navy drill in the East China Sea, also not known as the West Japan Sea.