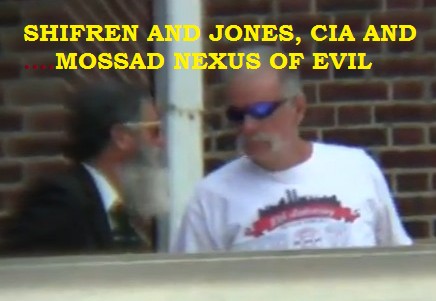 Mystery deepens over US film linked to Benghazi protests

(Photo and video not Guardian whose article is deceptive and contradictory, Editor)

The anti-Islamic video that inflamed mayhem in Egypt and Libya and triggered a diplomatic crisis is at the centre of a growing mystery over whether it is a real film – or was ever intended to be.

Initial reports about The Innocence of Muslims being a $5m production made by an Israeli-American director named Sam Bacile unravelled on Wednesday as ruins of the US consulate in Benghazi continued to smoulder.

Bacile – originally described as a California-based Jewish real estate developer – appeared to be a fake identity, and Hollywood could find no trace of his supposed feature-length attack on the prophet Muhammad. The blasphemous, 13-minute “trailer” posted online – a ramshackle compilation of scenes which depicted Muhammad as an illegitimate, murderous paedophile – was real, but there was growing doubt that a film existed.

The puzzle left the US and Arab world confronting the possibility the crisis was triggered, if not conjured, by a cheap trick. The one undisputed fact was that in July a video in English was posted on YouTube under the pseudonym “Sam Bacile”. He entered his age as 75.

It comprised clumsily overdubbed and haphazardly-edited scenes. “Among the overdubbed words is ‘Mohammed’, suggesting that the footage was taken from a film about something else entirely. The footage also suggests multiple video sources — there are obvious and jarring discrepancies among actors and locations, ” wrote Buzzfeed’s Rosie Gray.

That analysis appeared to be bolstered when a statement in the name of cast and crew was issued, distancing them from the footage. “We are 100% not behind this film, and were grossly misled about its intent and purpose. We are shocked by the drastic re-writes of the script and lies that were told to all involved. We are deeply saddened by the tragedies that have occurred.”

Cindy Lee Garcia, an actress from Bakersfield, California, who had a small role in the video, told Gawker she had no idea she was participating in an offensive spoof on the life of Muhammed when she answered an agency’s casting call last summer. The script was titled Desert Warriors, she said, and contained no mention of Islam. “It was going to be a film based on how things were 2,000 years ago. It wasn’t based on anything to do with religion – it was just on how things were run in Egypt. There wasn’t anything about Muhammed or Muslims or anything.”
YouTube

The character who on the YouTube clip was called Muhammad was in filming called “Master George,” Garcia said. The words Muhammed and apparently all offensive references to Islam and Muhammed were dubbed afterwards.

The actor said she was horrified that four US embassy employees, including the ambassador, died in Benghazi. “I had nothing to do, really, with anything. Now we have people dead because of a movie I was in. It makes me sick.”

She said the director, who went by the name Sam Bacile, claimed to be an Israeli real estate tycoon, but later told her he was Egyptian. He had white hair and spoke Arabic as well as English. He was keen that Master George – aka Muhmmad – be depicted in the worst possible light, she said.

Hollywood agencies said they had never heard of the film.

After a mob attacked the US compound in Benghazi, AP reported an interview with Bacile who said he was in hiding. He described himself as an Israeli-born Jewish writer. Israeli officials however said they had no record of such a person.

“Nobody knows who he is,” Yigal Palmor, the spokesman for the Israeli foreign ministry, told the New York Times in a telephoned statement: “He is totally unknown in filmmaking circles in Israel. And anything he did — he is not doing it for Israel, or with Israel, or through Israel in any way.” He added the filmmaker was “a complete loose cannon and an unspeakable idiot.”

AP stood by its story. “We continue to report this story and gather new information to explain the origins of the movie and the individuals behind it,” said AP spokesman Paul Colford. “More coverage to follow …”

Speculation centred on the possibility that Bacile was a member of Egypt’s Orthodox Coptic Christian diaspora in the US. A self-described “consultant” on the film, Steve Klein, an insurance salesman from Hemet, California, gave interviewers conflicting details about Bacile and the film.

Klein, an author and anti-Islamic activist who claims to have led a “hunter-killer team” in Vietnam, was consistent in saying Bacile was not Jewish.

Jim Horn, a fellow anti-Islamic activist who knows Klein, told the Guardian Klein worked closely with expatriate Copts. “He’s been helping them to stand up for themselves against Islamic terror in Egypt. That’s what he does.”