– Spanish Debt, Bank Borrowings Soar To Highest In Decades As Home Prices Fall By Most Ever While GDP Shrinks (ZeroHedge, Sep 14, 2012):

If only the Fed or ECB could print another Spain with the same facility that they engage in currency destruction, (and make no mistake: yesterday’s “open-ended” Fed easing, is today’s ECB “open-ended” intervention, is tomorrow’s BOJ, is Sunday’s PBOC, etc.), now might be the time. Because things in Spain, no matter what one is told, are getting progressively worse. The reason: on one hand the continuing surge in regions and total debt, both of which jumped in Q2, on the other hand Spanish bank borrowings from the ECB soared to €389 billion in August, a new record, and up from €376 billion, just as TARGET2 liabilities rose to a new record of €429 billion as well, explaining where that surge in German TARGET2 claims went, on the third hand housing prices collapsed by 14.4% in Q2, the most ever, and tying all the hands together was that the Spanish economy contracted. But please ignore the details. Focus on the important things, such as the surge in the Ibex, the S&P, consumer confidence, gold, crude, etc, however long these continue. Because unless there is such a thing as a free lunch, with every incremental injection, all Bernanke proves is that the underlying reality is far worse than what is telegraphed to the people.Back to Spain, and its soaring debt…

Spanish government debt rose to 75.9 percent of its economy in the second quarter of the year according to figures published by the Bank of Spain.

The figure is up 9.2 percent year-on-year and is the highest ratio in at least 22 years. The total debt ascended to €804 billion ($1.0 trillion), up €99 billion year-on-year, Spain’s central bank said in a statement Friday.

Regional government spending grew by 2.8 percent to €151 billion, equivalent to 14.2 percent of GDP, also the highest level in at least 22 years.

The most indebted region in the second quarter was Catalonia with €44 billion followed by Valencia.

… and its plunging homes prices:

Spanish home prices fell the most on record in the second quarter as the euro area’s fourth- largest economy shrank and a reduction in mortgage lending crimped demand for property.

The average price of houses and apartments declined 14.4 percent from a year earlier, the most since the measurement began in 2008, the National Statistics Institute in Madrid said today in an e-mailed statement. Prices fell 3.3 percent from the previous quarter.

“The data reflects a significant drop and confirms that prices haven’t bottomed out yet,” said Fernando Encinar, co- founder of Idealista.com, Spain’s largest property website. “Only homes that are heavily discounted will sell as access to credit has completely dried up for potential buyers.”

The number of Spanish homes sold declined in July for a 17th month, dropping 2.5 percent from a year earlier, according to the statistics agency. Mortgage lending fell 20.4 percent in June from the year-ago period, INE data shows.

The government has passed two decrees this year forcing Spanish banks to make deeper provisions for losses linked to real estate in an effort to push down prices and boost sales.

Spain built on average 675,000 homes a year from 1997 to 2006, more than France, Germany and the U.K. combined, according to a report by a unit of Spanish savings bank Cajamar.

… and its insolvent banks: 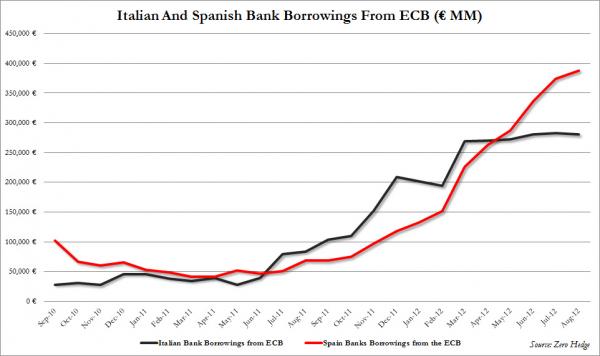 We used to make fun of Greece all the time. We had obviously not heard of Spain.