Once upon a time we thought that literally throwing cash out of rapidly moving objects was a privilege strictly reserved for Fed chairmen. Not any more. Moments ago, a car chase in South Los Angeles went horribly right, when two bank thieves who managed to find a Bank of America branch which actually had cash in it, and robbed it, proceeded to throw cash out of the moving car as it was being chased by a cohort of cops. Since the getaway car happened to be a Volvo, they naturally failed to get away, but not before they became local Robin Hood-type heroes to the massive gathering of gawkers all of whom would appear gainfully employed if only they were not just standing there, doing nothing, and hoping to steal the already stolen money in a major LA intersection at 11:30 am local time on a Wednesday. At least we now have the first two joint candidates to take over the BOE’s soon to be vacant governorship.

The aftermath of the chase is still going and can be seen here.

Finally, an artist’s impression of what would have happened if it was a certain Ben Bernanke driving the Volvo. 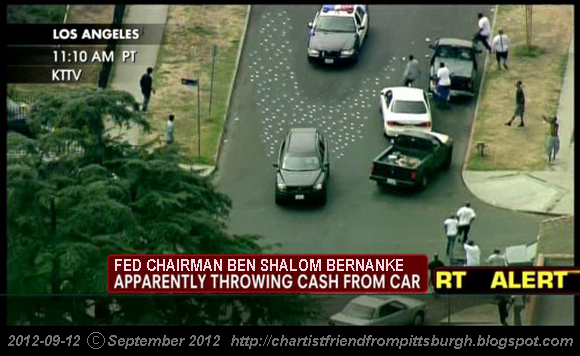