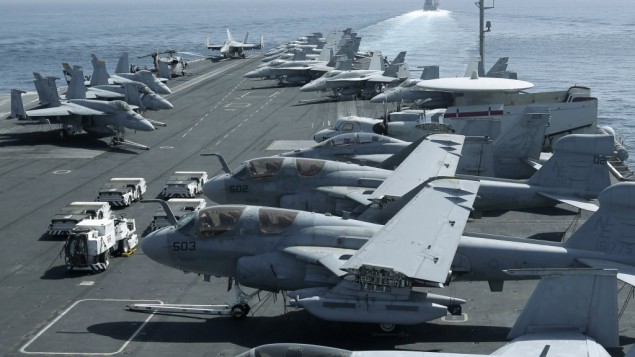 The United States has no intention of joining in a preemptive Israeli strike on Iran and expects the Islamic Republic to refrain from attacking US targets in the case of such an attack, senior Washington officials told their Iranian counterparts, according to a report in Yedioth Ahronoth on Monday.In recent days, senior administration officials reportedly sent messages to Iran, through diplomats from two European states, addressing the possibility that Israel would launch a unilateral strike and establishing that the US expects Iran to not draw it into a conflict by firing on American army bases and aircraft carriers in the Persian Gulf.

Monday’s report came amid widespread debate over the level of coordination between Israel and the US on halting Iran’s nuclear program, which — despite assurances by US Ambassador to Israel Dan Shapiro on Sunday that the relationship is as good as ever — appeared to be strained.

While Israel has warned that the Iranians are quickly approaching a potential weapons capability and that the use of force must be seriously considered, the US says sanctions and international diplomacy must be given more time to work.

Highlighting the disagreement between the two countries on the use of force were reports of a scaling-down of joint US-Israel missile defense exercises in October, and public comments by the Chairman of the US Joint Chiefs of Staff Martin Dempsey, who said last Thursday that he did not want to be “complicit” in an Israeli attack on Iran.

Earlier on Sunday, Prime Minister Benjamin Netanyahu hinted at criticism of the US position on Iran, telling ministers at the weekly Cabinet meeting that the international community has failed to send a clear message to Iran regarding its nuclear program. Netanyahu said that while international sanctions have harmed Tehran, they haven’t done “anything to stall the progress of the nuclear program.”

On Saturday, former minister Tzachi Hanegbi said the United States is not determined to halt Iran from getting a bomb and last eek’s IAEA report, which indicated that Iran has expanded its capacity for uranium enrichment, granted Israel even more legitimacy to strike Iran on its own.

Meanwhile, the New York Times reported on Monday that the Obama Administration is installing new curbs against Iran as a way to calm Israel and keep Jerusalem from launching an attack. It asserted that the president was considering a declaration of American “red lines.”

1 thought on “‘US To Iran: In Case Of Israeli Strike, Don’t Fire On Our Bases’”