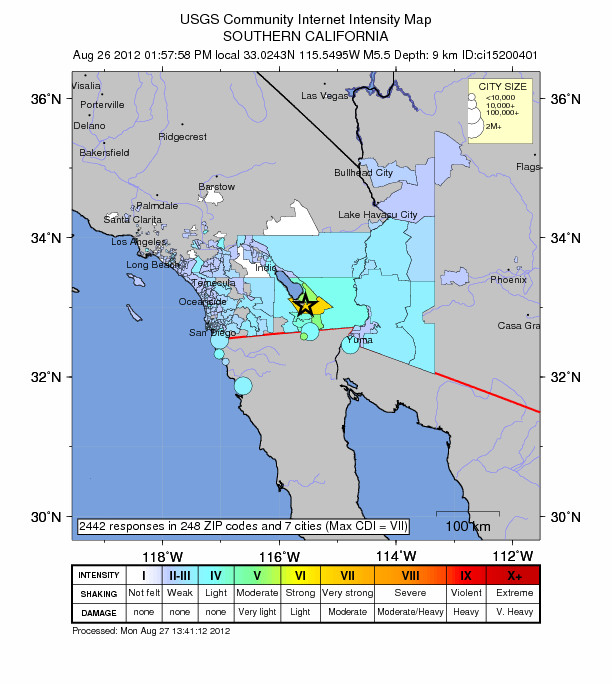 More than 70 earthquakes hit Imperial County on Sunday — including several that registered stronger than magnitude 4.0. The strongest measured 5.4.

The USGS’s “Do You Feel It” system shows the quakes were felt as far away as San Diego, Temecula and San Clemente. The 5.3 quake was felt in Moreno Valley, Indio, National City and Palm Desert, and in Yuma, Ariz., and Mexico.

A handful of buildings in downtown Brawley had minor damage after an earthquake swarm rattled the area Sunday, officials said. Most of the quakes occurred in and around that California town.

Capt. Jesse Zendejas of the Brawley Fire Department described the damage as “cosmetic” and said it occurred in at least three buildings dating to the 1930s. Crews were still assessing other areas of the city, he said, but no injuries had been reported.

Imperial County firefighters were also assisting in the survey.

The first quake — a magnitude 3.8 temblor, which was downgraded from a 3.9 — occurred at 10:02 a.m. about three miles northwest of Brawley, and was followed by a series of other quakes in the same general area, according to the U.S. Geological Survey, which may continue to revise the numbers.

Thomas Jordan, director of the USC-based Southern California Earthquake Center, called the activity a “very active swarm” — something not unusual for the southern edge of the San Andreas Fault, which has seen similar occurrences in recent years.

This swarm could continue to rumble the region for a few days, Jordan added.

“It’s been pretty productive so far,” he said. “It’s a vigorous one. We got some pretty good-sized events.”

As data continued to roll in, Jordan said, scientists would study the swarm to learn how the sequence developed and what impact it could have on the fault.